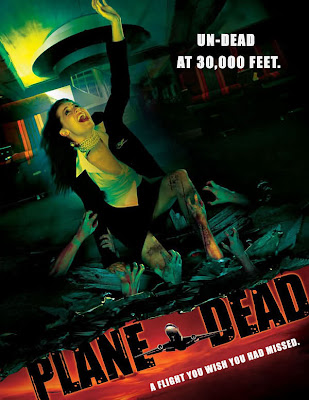 Contrary to popular opinion, despite being a 2007 release, Flight of the Living Dead: Outbreak on a Plane—or Plane Dead, as it goes by in Germany—is not a parody or intentional take-off of the bigger budgeted (and, truthfully, more successful) flick Snakes on a Plane (2006 / trailer). Co-writer and director Scott Thomas has often stated that despite basic plot similarities, the actual idea and pre-production for his film was in development long before the public relations for Snakes on a Plane even went viral.

A shame then, considering the longer lead time the Thomas's film had, that a little more care wasn’t put into the script, for as entertaining as the film might be—even in the butchered form common in Germany—the flick suffers some really huge "what-the-fuck" developments that sorely test the patience of the most forgiving viewers. But if you look past the plot holes and overly ridiculous events—like a plane built so flimsy that the living dead can rip their way through the floor but that turns out later to be built well enough to withstand the explosion of an improvised bomb—Plane Dead does offer some mindlessly fun (if somewhat repetitive) mayhem in a totally new location (for zombies, anyways) as well as some great humor, both deadpan and not. Fans of trash film will definitely enjoy this direct-to-DVD, especially if they are in a forgiving mood—which is actually rather easy when a low budget film at least tries, and this flick does. 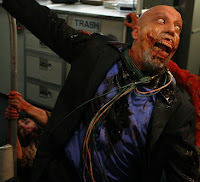 Plane Dead starts out almost as a parody of that never-ending, campy Airport (1970 / trailer) franchise that inflicted four films upon the gullible public throughout the 70s—about the only thing missing was a singing interlude by the nun. But unlike all the flying disaster flicks of the Polyester Era—and all flights in real life—the 747 airplane on its way from Los Angeles to Paris in Plane Dead is over half-empty.... at least until the zombie sickness spreads and the plane is suddenly overbooked with the undead.
Three scientists working on a viral revive-the-dead weapon based on Malaria (which actually isn’t a virus, but who cares) are transporting a container in the baggage department containing Dr. Kelly (Laura Cayouette), the infected wife of one of the docs, a Dr. Lucas (Dale Midkiff, whose acting has noticeably improved since Pet Sematary [1989 / trailer]).

Needless to say a storm pops up and out pops Kelly and in no time flat the infection spreads, especially since the plane has more airshafts than the Empire State Building, the floor is made of cardboard and the zombies are of the fast-running variety popular since 28 Days Later (2002 / trailer) and the remake of Dawn of the Dead (2004 / trailer). Although the build-up to this point is a little slow, when the virus spreads the numbers quickly dwindle to a Tiger Woods character (Derek Webster as "Long Shot") and his bitchy wife (Siena Goines), a cop (David Chisum), a con artist that just happens to know how to fly planes (Kevin J. O'Connor of Lord of Illusions (1995 / trailer) and Deep Rising (1998 / trailer), a plucky stewardess (Kristen Kerr) and an Air Marshall (Richard Tyson, the heartthrob in Zalmon King's Two Moon Junction [1988 / trailer] and the psycho bad guy in Kindergarten Cop [1990 / trailer]).

In the meantime, the US government hasn't been sitting on the toilet twiddling thumbs until the Ex-lax arrives: realizing how quickly the virus would spread were it to reach a populated area, a fighter jet is sent out to destroy the 747—will our courageous heroes survive?
In her review of Plane Dead, Final Girl hits the nail on the head when she says "All in all, watching Flight of the Living Dead is a bit like eating a whole bag of chips: it's not good for you and there's no nutritional value, but it satisfies a craving. You may hate yourself in the morning, but you'll enjoy it while it's happening—even though you know you shouldn't." 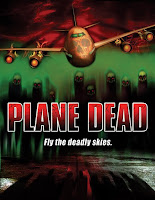 Think twice and you could tear Plane Dead to shreds, but accept it for the visual trash food that it is and you'll enjoy yourself. Still, for future projects, Scott Thomas and his fellow duet of scriptwriters should definitely put some emphasis on improving their scriptwriting abilities. A junk meal might work once, but too much empty junk food can make even the most forgiving viewing public go Dan White.
Posted by Abraham at 10:20:00 AM