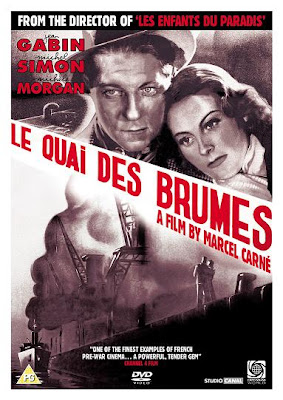 "A tree. But when I paint one, it sets everyone on edge. It's because there's someone or something hidden behind that tree. I can't help painting what's hidden behind things. To me a swimmer is already a drowned man."
Le Peintre (Robert Le Vigan) in Port of Shadows 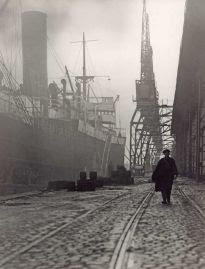 Le quai des brumes – or Port of Shadows, as it is called in English – is the third feature film from the famed French director Marcel Carné who, working together with the French surrealist poet and screenwriter Jacques Prévert, became the creator and (for a time) preeminent practitioner of a filmic style that came to be known as "réalisme poétique," a term he himself reportedly disliked. But as influential a filmmaker he may have been at the time, he fell into critical disfavour in his later years and, possibly as a result, is remembered today mostly for having directed Les enfants du paradis / Children of Paradise (1945), a film regarded by many as the quintessential masterpiece of French Cinema. (To which this reviewer can only say: to each his own.)
The term "réalisme poétique" – or, in English, "Poetic Realism" – is loosely used to describe a variety of films made in France prior to the outbreak of and during WWII which share many stylistic characteristics of German Expressionism and American Film Noir but feature an over-riding sense of nostalgia and doomed love as well as an overall visual aestheticism that is missing in the other two film movements – or, at least, is far darker in the latter two filmic movements. 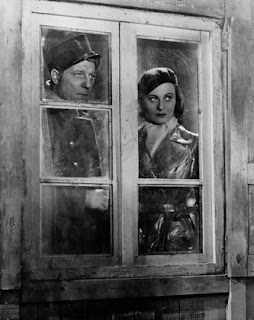 (The idyllically beautiful street scene in Le quai des brumes, for example, verses the nightmarishly artificial streets of The Cabinet of Dr Caligari (1920) or the fog-shrouded emptiness of the city street in Detour (1945).) Likewise, although Port of Shadows does share the same sense of unavoidable doom found in the best existentialist Film Noirs, there is a noticeable lack of the man-eating fem fatale in Carné’s film: Nelly, the main female figure – played by the French legend Michèle Morgan who, during her brief foray into Hollywood in the 1940s, built the house at 10050 Cielo Drive (torn down in 1994) where Sharon Tate and others were eventually to meet their senseless end at the hands of Charles Manson's Family in 1969 – may be sexually active, but she is a tragic heroine quiet willing to sacrifice herself for love (fruitlessly, as it turns out). The aesthetic beauty of the film, achieved in part by the patently artificial sets and lighting – and underscored by ironic and laconic dialogue that is often pithier than that of Harold Pinter in top form – is occasionally at odds with the merciless fatalism and bitterness of the storyline, but it is this very mannerism that magnifies the poetic aspects of the film. 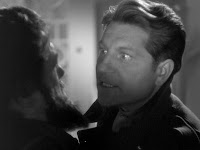 In all likelihood, the encompassing mood of nostalgia-tinged resignation and bitter acceptance exuded by the film is probably a relative realistic reflection of that felt by the masses of war torn and occupied France circa 1938.
On a fog-enshrouded road at night a truck driver picks up a hitchhiking deserter named Jean (Jean Gabin, the male winner of the 1953 Lemon Prize, which is awarded by French journalists to the nastiest French actors) who is on his way to the port Le Havre, where he hopes to possibly catch a ship to some South American country. After an altercation between the two which ends peacefully, Jean continues on foot, now befriended by a little white dog. In Le Havre, in a nightclub the hood Lucien (Pierre Brasseur) is ineffectually trying to threaten Zabel (Michel Simon) into revealing where his friend Michael is. Zabel, Jean and the alcoholic Quart Vittel (Raymond Aimos, who died six years later during the Liberation of Paris) run into each other briefly as Zabel leaves the club. 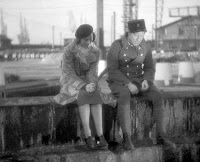 Quart Vittel realises Jean’s situation and takes him to a seedy, harbour-side dive run by the talkative Panama (Édouard Delmont), where Jean finds respite and food. Le Peintre (Robert Le Vigan – whose successful acting career was curtailed at the end of the war because he had given his anti-Semitism and fascistic tendencies full freedom during the occupation and collaborated with the German invaders; sentenced to ten years hard labour, he eventually to escape to Argentina after the war, where he supposedly died poor and insane in 1972) shows up for a drink and to express his world-weary attitudes before deciding (unbeknownst to the soldier) to kill himself and give Jean his identity. (The passivity with which Panama meets both the news and the eventual act is stunning.) Jean discovers Nelly (Michèle Morgan) in the kitchen, initially mistakening her as a prostitute (an exchange of unadorned dialog that would never have been allowed in an English-language film of the time – think of Fritz Lang’s Manhunt (1941), for example, in which Joan Bennett’s streetwalker character was illogically changed into a seamstress), and remains with her as she hides from Zabel, who has taken refuge on Panama’s porch from Lucien’s gunfire. I

n the days that follow, Nelly and Jean fall deeply in love as Zabel, Nelly’s uncle and murderer of her prior squeeze (the friend Lucien is looking for), applies increasing pressure for her to give herself to him and Jean twice publicly humiliates Lucien, who likewise lusts for Nelly. Jean, now graced with the identity of Le Peintre, manages to finagle a job aboard a boat to Venezuela, a chance for freedom that Nelly gladly allows him despite their night of blissful love in a flophouse (another scene that would never have been in an English-language film of the time) and the living hell she faces in Le Havre. Aboard the boat, Jean cannot resist the urge for one last visit to Nelly, which results in a fatalistic and tragic resolution… 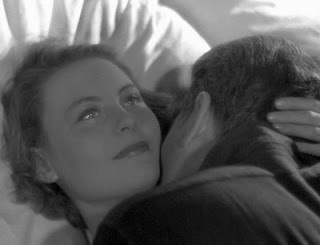 The characters, in truth, are far more stereotypes than rounded out personalities, but as such they are extremely effective in conveying the internal emotions of the given individual as they are buffeted by the uncontrollable forces of fate. Likewise, there is far less realism in the narrative and visuals than there is poetry, but this poetic stylisation serves well to underscore the existential romanticism of the plot. Although the overbearing tragedy, Weltschmerz and mordancy of Port of Shadows – best exemplified by the Painter’s statement "You have to be an idiot to go on living with such discontent, such anxiety" – does on occasion almost make the film come across like some sort of educational film for Goth 101, Port of Shadows does get under the skin long before it hits you over the head with its final, shocking scene(s).
Port of Shadows is clearly an early masterpiece of Carné and a masterpiece of tragic film in general – and definitely worth watching, even if one is not a fan of three-hankie weepers.

"Funny how blood stains clothes but washes off hands so easily. Ever notice how doctors and surgeons have such clean, white hands? Even though their pretty hands wallow in blood the whole blessed day."
Zabel (Michel Simon) in Port of Shadows

Nice review. Minor quibble: France was neither war-torn nor occupied in 1938.