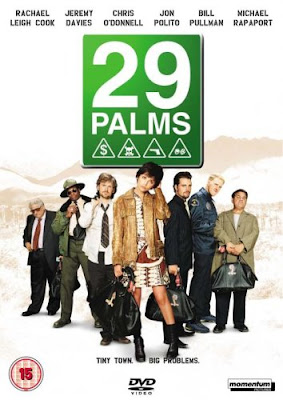 No, this review is not about the relatively unknown 2003 "scandal" flick Twentynine Palms (trailer) written and directed by the French director Bruno Dumont, but is about the less well known 2002 "crime" flick 29 Palms directed by the Uruguay-born Leonardo Ricagni and written by the (to-date) one-shot non-wonder Tino Lucente. In truth, 29 Palms seems less written or directed than simply thrown together by a person or persons hoping to achieve some sort of cheap crossbreed between a Tarantino and David Lynch film.
Well, they failed miserably: 29 Palms is less a coherent movie than a celluloid accident. That the film is so fucked up isn’t all that surprising if you follow the email exchange of the producer Bryan Lord and some less-than-impressed critic at Contact Music; seeing that the thin-skinned producer himself doesn’t seem to know who is who in the film, it isn’t all that surprising if no one else does either. But then, maybe some aspects of the film got rewritten during filming or changed during the editing and he just didn’t notice it.

(In truth, if "The Hitman" [Chris O'Donnell] really were an FBI agent, it would at least make sense that he recorded his contract meeting with "The Chief" [Russell Means], though it would do little to explain his actions throughout the rest of the movie.) But then, the whole film exhibits a general cinematic and narrative sloppiness that could easily attest to a general disinterest of all those involved—it does give one reason to wonder, in any event, when the director Leonardo Ricagni himself fails to list the flick as one of his projects on his own website.

29 Palms smells—and plays—like an intentional tax write-off that is substituting as rent-paying occupational therapy for a bunch of new and/or familiar faces of varying levels of thespian talent. And while it fun to watch Bill Pullman’s short but entertaining turn as "The Ticket Clerk" and Michael Rapaport does leave an impression as "The Cop", most of the actors really don't make much of an impression at all—but then, the script calls only for stereotypes and not characters, so it really doesn't give them all that much to work with in the first place. Worse, the film also doesn’t give one much to remain interested in, so the viewer has a hard time staying awake throughout the whole film.

Aside from the overuse of stereotypes, 29 Palms is also particularly aggravating in its story development and "big" scenes. The real city of 29 Palms is located in San Bernardino County, which more or less translates into the Californian Desert to the rest of the world. And the desert is not really a place where the paths of seven or ten characters traveling the back roads are necessarily going to regularly and easily cross paths. They do in 29 Palms, however, almost as if everyone were wearing homing beacons. The scene in which The Cop is trying to rape The Waitress (a cute-looking Rachael Leigh Cook) is typical in this sense: filmed with a 360 degree revolving shot, the first time the camera encircles the two nobody else can be seen for miles; the second time it circles, The Hitman's car is parked a couple of yards away. Equally groan-inducing is the scene in which The Drifter (an unmemorable Jeremy Davies) enters the Indian casino and a huge shoot-out ensues in which no one's gun ever runs out of bullets and nobody gets shot. Likewise, the jail—like The (pot smoking) Sheriff (Keith David)—is good for a momentary giggle the first time around, but not the second time. Lastly, for being so devastated by the murder of his girlfriend (wife?), The Drifter sure hooks up with the The Waitress mighty easily by the end of the movie. 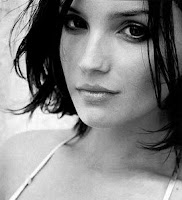 Let’s see, the basic plot of 29 Palms goes something like this: The Judge (Michael Lerner) is waffling on a court decision, and when his clerk (Jeremy Davies) questions him about it, The Judge tells The Chief that he’s working for the FBI. The Chief sends The Warrior (Litefoot) to kill the clerk, but instead The Warrior does a war dance and kills the clerk's gal. The clerk is now The Drifter, and The Chief calls in The Hitman to do the job right, paying him with a bag full of money. The Security Guard (Jon Polito) steals the bag but gets shot by The Hitman, which leads to The Cop stealing the bag from The Security Guard. The bag eventually gets to The Drifter, but along the way The Waitress shows up to steal the bag, too. Only now there are three bags. And so, stereotypes go this way and that way and quirky scenes happen and some people die and others don't and the viewer is left with the feeling that yes, they just wasted an hour and a half of their life.
If aspects of the plot as presented in the above critique of the film are wrong, put it down to the critic having dozed off from boredom now and then. But, to give credit where credit is due, 29 Palms never really got bad enough to turn off—it just also never got good enough to recommend.
Posted by Abraham at 1:53:00 PM

This is my favourite movie of all time.

There are also folks out there that think McDonald's in the pinnacle of culinary delight, that US Bud is the best beer in the world, that Lola Ferrari was a hot tamale and that Sarah Palin or Ron Paul would be the bee's knees as a US President... but what surprises me is that you list works by Dickens, Wilde, Tolstoy, Steinbeck, Shaw and Lawrence as your "Lieblingsbücher" (yes, I looked at your profile); somehow something so 2nd rate as "29 Palms" just doesn't seem right as your "[...] favourite movie of all time". Are you perhaps related to the filmmaker? May I just offer a few names: Murnau, Lang, Eisenstein, Whale, Wells, Hitchcock, Wilder, Fellini, Kubrick, Scorsese, Coen Bros., Kaurismaki, Fincher – even Ed Wood or Michael Bay or Fulci or Bava or Corman or Franco or Waters or Mattai have made better and more noteworthy and honor-due films than "29 Palms". Seriously, if it is really your favorite film of all time, dare I say that you simply haven't seen enough yet? How about starting with, say Leni's "The Cat and the Canary" or Murnau's "Sunrise" (or, if you want to start with sound, "The Third Man" or "The Mummy") and then let's talk again in a year.
Of course, the above rant is based on the concept of "favourite film of all time" as being one of the "best films of all time" around. That isn't always the case: I'd classify "Slugs" or the indefinitely much better "Dark City" as favs, but I would never say they are amongst the best ever. Fact is, I can't stand many a masterpiece – almost everything by Wenders or Fassbinder, for example, makes me gag.