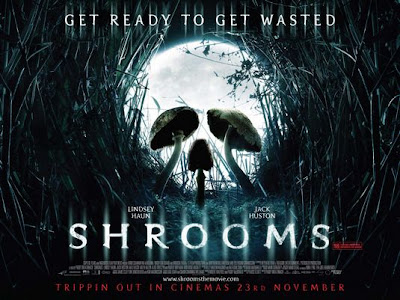 (Trailer. Spoilers.) A group of five Americans with way too much money fly all the way to Ireland to take mushrooms with a college buddy. Driving deep into an old wood forest that is populated by Irish-accented West Virginian hillbilly idgits, they lay camp at a lake close to a deserted orphanage. They take drugs and one by one but for one they die. And then there is a twist ending. Scary.

In terms of where the film belongs on one's DVD shelf, Irish director Paddy Breathnach's 2007 horror film Shrooms – providing one chooses to even keep the film once having seen it – belongs right up there next to the original Reefer Madness (1936, aka Tell You Children). For much like how the dead teenager films of the 80s propagated the basic concept that you'll die if you have sex, Shrooms propagates the idea that if taking mushrooms doesn't kill you, it'll drive you insane – which is exactly what Reefer Madness tried to say about pot. 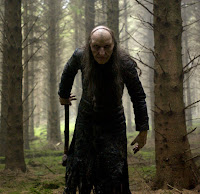 And much like how Reefer Madness now gives the Average Joe the feeling that the cast and crew of that camp classic had probably never actually smoked a doobie in their life, Shrooms gives the experienced viewer the feeling that no one is the film knows jack shit about mushrooms. Not that one has to know a drug to enjoy a good drug movie – or a good anti-drug movie – but if you do have the slightest knowledge about Shrooms, Breathnach's film tosses up some really lame stupidities that are hard to overlook. But then, the magic mushroom that is the true driver of the story – the death's head psilocybe – isn't even real, so perhaps it is aside the point to slag off on how misinformed and wrong the film is. The experienced with forgiving natures and those who have never taken mushrooms and don't know anything about them may well enjoy the film for what it is: A well shot teenage body-count film that agitates somewhere between Deliverance (1972/trailer) and either version of Friday the 13th (1980 or 2009/trailer) or any other teenage bodycount flick, with a slight nod to any number of films that involve a deserted house with a horrible legend.

If there is one half-truth in the film, then it is said by Jake (Jack Huston) to the five Americans as they drive to their future deaths. A worldly man of experience, he emphasizes that mushrooms are best taken "outdoors, in the right environment and with the right people." Well, the outdoor bit doesn't hurt but also doesn't have to be, but the latter two aspects definitely do make for a more pleasant experience – especially if the event is to be a social one. The thing is, for a man who spouts such wisdoms, Jake – like everyone else in the film – continually proceeds to make for bad vibes all the way up until the mushroom tea is finally drunk. Worse, in total disregard of common sense and drug etiquette, they all take the drugs while one of their gang, Blutto (Robert Hoffman), is missing – with the fucking car keys! – and a second, Tara (Lindsey Haun), is still suffering from a bad trip. (They might not deserve to die for taking drugs, but for being egoistic, brainless dickheads they sure do.)

But, ignoring the fact that all the victims-to-be lack both brains and proper drug etiquette, at least once the drugs are taken the story picks up a bit, even if most of the characters walk and look and talk and run around and act as if they had drunk Yogi Tea and not a hallucinogen. (OK, I admit I successfully acted "normal" in the distant past while tripping – in my younger and much dumber years, I even once drove a car across LA from a raided party while tripping the light fantastic – but I am sure I wasn't even half as "normal" as the kids in this film.)

Shrooms is for the most part pretty lame, but it does have some aspects that make it a clear choice over, say, Desperate Housewives or Lost reruns. For example, as dickie as all the characters are as a whole, the gals are at least hot (a real shame they don't get naked), and there are worse actors to have graced a horror film. Furthermore, the film does have nice (dank) colors, the editing is pretty nifty (always a good thing to have if the deaths happen off-screen), the camera work is pretty spiffy, there are a few good laughs (loved the talking cow – wish I had experienced one back in my younger days) and, after they finally start to die, the tension is OK. But Reefer Madness is definitely a lot more fun (no matter which version you see).