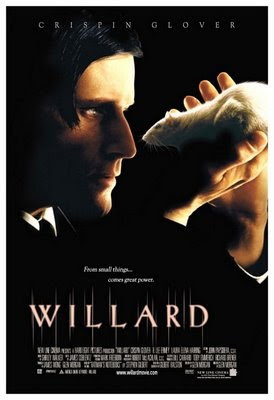 (Trailer) This movie made me think of my childhood. Not that my only friends were rats (though many of them came close to it), but at the tender age of 9 when the original Willard came out in 1971, I was forbidden to see it. But a year later in 1972 when its sequel, Ben, came out, my 2-year-older sister somehow convinced my mother that this time around she should take us to see the new film. (I think the fact that Michael Jackson's saccharine love song Ben, which was being played non-stop on the radio, may have been of help here.) So, one rainy evening we hopped into our 1967 Rambler and drove across the Woodrow Wilson Bridge from Alexandria, VA, to someplace called Anacostia and caught the movie, a fuzzy warm flick about a health-impaired child who befriends an intelligent rat. I remember liking it, but what I remember more is that we three were the only white folks in the entire movie theatre. It didn’t bother me much, but my mother didn’t really seem too relaxed; after the same thing happened again two years later when my sister convinced my mom to go take us to see Claudine (1974) (Trailer), my mom said it was the last time she would let my sister pick the theater. Not that that mattered much, ‘cause by then my sister had entered the age when she no longer wanted to go to any movie with the family. As for me, I had entered the age where I would sneak off for the flicks I wanted to see ‘cause I knew my mom would never let them see them if I asked. (As a result, I was twice more the only whitey in a black theater: once for Abby (1974) (Trailer) and, four years later, for Dawn of the Dead (1978) (US trailer or British trailer) – you should have seen the popcorn fly and heard the loud “boos” during the scene in Dawn when Peter (Ken Foree), the Afro-American character, plays waiter for the white couple during their "romantic" meal.) So, what does all the above reminiscing have to do with the 2003 remake of Willard? Not much, really, except that director Glen Morgen's remake of Willard – or, to be exact, Crispin Glover's cover version of the song Ben (done for the Willard) – simply brought up a memory that I thought I would share with you.
But now, time to get to the movie itself. 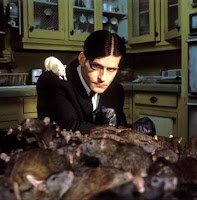 While not exactly bad, Willard is far from something to jump up and down and write home to momma about. In fact, in all truth, the music video on the DVD to Crispin Glover’s version of Ben, the all-time classic love song to a rat and theme song to the same-named film from 1972, is actually far more creative and interesting than the film itself (although it, too, would probably get a bit tedious if it were as long as the actual movie). For all the good points of the flick – a great Crispin Glover, loads of cute & cuddly rats, some nicely black and/or ironic humor, good editing, nice CGI – it suffers an odd feeling of under-development and seems greatly hampered by its PG-13 rating. And, although nominally a modernized “nature’s revenge” film, Willard is far less a horror film than a film about a very confused and pitiful loser – made both believable and likeable by Glover – that finally snaps. Still, the new Willard really adds nothing new to the old Willard; it is not some reinterpretation (like Ghost Ship (2002, Trailer), House on Haunted Hill (1999, Trailer) or House of Wax (2005, Trailer) – all of which, whether you found them good or not at least tried to be their own film), but is actually a straight-out remake... and, in adding little other than modern technology, Glover’s performance and a few cosmetic changes to the story, it seems almost totally unnecessary. The final scene is also a nod to that of Psycho (1960), but the reference – like the film itself – seems less clever or creative than superfluous. It is so obvious that Willard could have been so much more than it is that if the viewer puts on their thinking cap instead of turning off their brain, the viewer might get aggravated. (The painting of Willard’s father hanging in his house, by the way, is a painting of the actor Bruce Davison; his last memorable role was that of the asshole senator that turns to water in X-men (2000), but he also played the title role in the original version of Willard.) 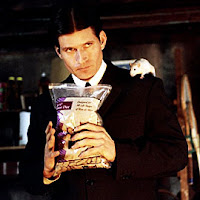 Willard is fine fodder for a rainy Sunday afternoon, and is so lacking in blood and guts and anything all that disgusting that you could probably even watch it with your kids. And, if you’ve never seen the original Willard (like me, thanks to my Mom, may she rest in peace), then you’ll probably find the film more than mildly interesting (like I sorta did). Still, while the young and impressionable might still get a nightmare from the movie, no one else will. (Another memory of the Dawn of the Dead screening: The people came to the late-night screening with their kids and babies and were left in – to an NC-17 film, no less!)
One can only hope that director Glen Morgen's next film, the remake of Black Christmas (2006, Trailer), offers a little more creativity and vision then this film does.
Posted by Abraham at 4:13:00 PM