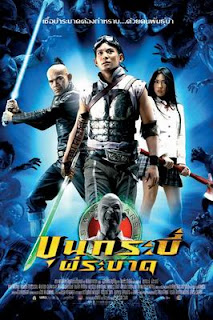 The Thai film industry is one of continual surprises. And Sars War is without a doubt one fucking great surprise! In what seems to be his first film, scriptwriter and director Taweewat Wantha decided to not only do a Thai take on the current zombie film resurgence, but to take the piss out of it (and everything else) as well. The result is a hilariously surreal and bloody comedy that (according to one Internet source) has a total body count of 110 people. But there is more to the film than just a body count and blood: Taweewat Wantha's humor swings back and forth and up and down and all over the place with such wild abandon that before one knows what’s happening, one begins laughing at even the stupidest joke. Indeed, the level of the humor often makes one think that the film was probably actually scripted by a room full of zombie-obsessed 13-year-old pubescent boys high on too much Thai and getting off on old sex ed books – but then, considering the supposed topic of Taweewat Wantha's second film, Asujaak/The Sperm (2007), perhaps the good man did indeed write Sars War by himself. (According to IMDB, The Sperm is about a rock musician who jerks off too much and whose flying sperm impregnates local women who in turn give birth to an army of little jerking clones that die when they have orgasm; things get complicated when an alien accidently turns one little creature into a giant...)

Taweewat Wantha is obviously a film junky, too, for the film liberally quotes dozens and dozens of films ranging from Star Wars series (the title and a sword) to Kill Bill (the occasional use of animation) to Demons 2 (the location) to Anaconda (the tertiary monster, a mutant zombie snake) and any dozen other films and/or genres. For that, the film remains a truly unique and enjoyable viewing experience for any and all people who can laugh at zombie babies on the rampage or hot Thai babes who turn out to be ugly, mustachioed transvestites. Hell, just watch the trailer or this funky video of a Thai industrial rap song sung by the main lead and hero of the film – if you don't find them to be the bee’s knees, go rent a copy of The Wizard of Oz. 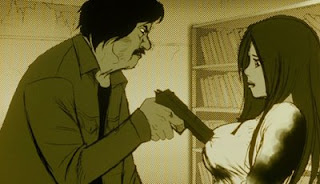 The opening credit sequence is a bloody and violent animation short of heroes on motorcycles slashing their way through zombie hoards, which is followed by a brief scene of a decimated African landscape during which the new, deadly strain of the SARS virus is explained. An almost Jan-Svankmajer-inspired scene using postcards explains how a SARS infected cockroach makes its way to Thailand where it bites a bald-headed guy (in the deleted scenes one finds out that he is a doctor working on a cure for the virus) who manages to make it back to his high-rise before he goes zomboid. In the very same building a bunch of low-level gangsters are holding a kidnapped virginal babe in a school uniform named Liu (Phintusuda Tunphairao) for ransom; her father sends in the young virginal swordsman Khun Krabii (Supakorn Kitsuwon – the guy doing the industrial rap song; also found in the Thai cult fave Tears of the Black Tiger) to save her. But when the epidemic breaks out and everyone in the building turns into flesh-eating zombies – and turns one pet snake into a mutant snake monster – Master Thep (Suthep Po-ngam) decides to come to the aid of his younger superhero protégé. He's unexpectedly aided by Dr. Diana ("Lene Christensen" – the same babe found in the Ed Woodian Thai horror film Devil Species/Phantugram ammahit (2004)) who is on hand to try out her new (but ineffectual) SARS vaccination. But time is running out: To prevent the spread of the virus, the government plans to bomb the building flat.

The plot is an excuse for a non-stop barrage of inane, almost post-modern jokes – at one point Master Thun even says something like: "zombies, a bomb, and now a giant snake! Boy, the producers really want to make money with this movie!" – about anything and everything, jokes that oddly enough even manage to meld well with the blood and guts and horror elements of the film. But for all the blood spilled and munching zombie hordes in Sars Wars, the flick is first and foremost an exercise of in hilarity and bad taste and is best enjoyed as such. Since Taweewat Wantha keeps his movie moving faster than a Porsche on the German autobahn, some logic and coherency does fly out the window, but neither are actually missed. (Love that noodles joke – one of the more truly disturbing and weird jokes ever caught on film.) 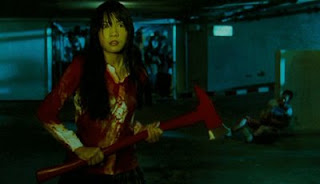 If a fast-moving film overflowing with exuberant inanity, pubescent surreal humor, hot babes and tons of blood sounds like your cup of tea, then you can't go wrong with Sars Wars.
Posted by Abraham at 2:55:00 PM