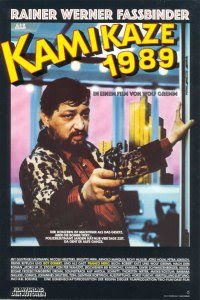 Based on Per Wahlöö's book Mord im der 31. Stock (which translates into Murder on the 31st Floor), Kamakazi 1989 is a good example of everything that was wrong with "modern" German cinema of the 1970s and 1980s. Pure intellectual bullshit convinced of its own importance and content but completely lacking humor, narrative structure, any decent cinematic technique or any other aspect that might make it interesting—including content. Was to be expected, seeing that Rainer Werner Fassbinder is playing the lead roll of Police Lieutenant Jansen. Perhaps the man did direct a good film or two, despite the inherent lethargy all his films wallow in, but the man never acted in a halfway decent one. 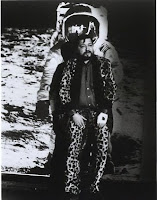 In Kamakazi 1989 Fassbinder portrays Lansen as a disinterested alcoholic, fat, egoistic and overly self-assured. In other words, a mirror image of what the man was, but possibly with less facial expression. Director Wolf Gremm, already well on the way to becoming the third-rate television director he is today, failed to get the fat man to even simulate acting, much as he failed to make his film in any way interesting. Kamakazi 1989 is so downright painful to watch that you're happy when the film finally puts you to sleep. Even the brief appearance of Franco Nero fails to generate any excitement, but then, like every role in this movie, his character is a half-baked empty shell lacking conviction, drive or intent—despite being the bomber sought for most of the film.

In some totalitarian system of the future in which everyone drives cars from the 1970s and wears the worst stylistic excesses of the New Wave 80s and everyone seems to try much too hard to act eccentrically, Janssen is called in to find out who is responsible for the bomb threats at "The Combine," the ultra-powerful television company that seems to control the world. Why they bother or why he bothers is hard to fathom, for no one really seems to care or wants anything to be discovered anyway. Given four days to solve the crime, he is informed that he must work in total secrecy, but his partner Anton (Fassbinder regular Gunter Kaufmann, who got to butt-fuck Brad Davis in Fassbinder's indulgently entertaining Querelle (French Trailer) that very same year) dogs him constantly—and even saves his life at one point. Throughout the whole film the who or what or why or where or when or how for anything seems to be totally irrelevant. The non-plot eventually starts revolving around some secret 31st floor in the Combine's office building where terrible things supposedly happen, but once the floor is finally entered (for the second time, actually), Kamakazi 1989 ends so abruptly that the whole film comes across all build-up and no point. (But then, the film is pointless.)

OK, supposedly it some sort of campy persiflage of both totalitarianism and crime novels, but it isn't. Much more, it is simply a good example to use if you ever want to argue that Germans have no humor. Truly terrible, Kamakazi 1989 is bad in a bad way, a torture to sit through: boring and humorless, it is as badly dated as it is badly made and full of itself. A bad, bad, bad, bad, bad, bad, bad, bad, bad, bad, bad film, but a good argument that Fassbinder should have overdosed a year earlier—maybe then this piece of shit would've gotten shelved and the celluloid used for something better.
Posted by Abraham at 6:37:00 PM

Not a great movie to be sure but your comments on Fassbinder only show your ignorance. Couldn't act? Directed only one or two good movies? Fassbinder's movies have changed the lives of millions. You don't get it and I feel sorry for you.

Thank you for revealing your interest in my opinions, and for the bravery you show by putting your name to such a radical stance. I admire people like you who are willing to go out on the limb like and put their names behind their opinions; such bravery is to be commended. Likewise, the refutations you make about Fassbinder’s talents are well founded, literate and convincing, and the intelligence of your argumentation, as intellectually sound and deftly written as it is, can only lead one to reconsider contrary opinions. Have you ever thought of perhaps writing yourself? You have a highly persuasive and elegant style of expressing yourself that truly leaves an impression.Mit freundlichen Grüße,

A brief addendum to the above:
It seems that "Anonymous" above does have a backbone of sorts, if only of jelly. Rather than respond via the blog, where everyone could see him put his name behind his forceful and intelligent arguments in support of his cultured opinions, he chose to search out my business email from the blog (under “How I Put the Bacon on the Table" and write me personally. If the name on his email (blackconnor@hotmail.com) is correct, the man whose soul I have so deeply touched is named Connor Black.
But I find it not right that he withhold his amazing abilities of expression and thought from the other readers of this blog, so herewith I present the one line of his "private" email to me verbatim:
“Hey - it's a shame that you have little to do with your meagre talents but pedal your sub hack film reviews as 'writing'. You are a facile bottom feeding cunt."
Faced with such intellectual and cultured argumentation, I admit I was at a loss to counter his statements and thus simply responded:
"My, aren’t we erudite. Look in the mirror while writing, did you? Mfg, bryin"
(For those of you who don’t know, “mfg” is German and short for “with friendly greetings”.)