Here's a short and silent little underground animated treasure from the days of yesteryear. As with our Sept 2013 Short Film of the Month Bambi Meets Godzilla (1969) and our Oct 2016 Short Film of the Month Bring Me the Head of Charlie Brown (1986), copyright laws were broken; and as with those films, no legal repercussions occurred. If Disney even noticed the film when it came out, why give it the publicity of a lawsuit?
Made in protest of the Vietnam War and originally on 16mm film stock, Mickey Mouse in Vietnam was considered lost for years until it suddenly resurfaced on YouTube in 2013. (Just wait and see: If and when London at Midnight [1927 / surviving bits] finally resurfaces, it'll be on YouTube.) The one-minute short takes the famous slogan "Join the Army, see the world, kill people" and redoes it as "Join the Army, see the world, die." 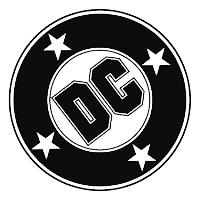 Originally screened at the 1968 Angry Arts Festival, the creative force behind it was [Whitney] Lee Savage (17 Dec 1928 – 6 Sept 1998), an American artist (see below) who went on to do shorts for Sesame Street, and Milton Glaser, a designer best known for having created the "iconic I ♥ NY logo". (As an "I ♥ Berlin" person, closer to our heart is the less known fact that he designed DC's Bronze Age "bullet logo" above.)
Two People (1964),
Painting by Whitney Lee Savage 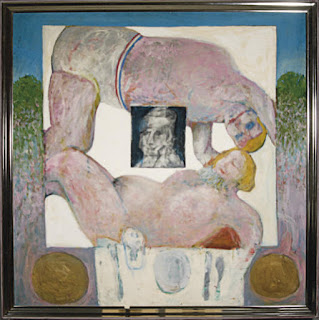 Mickey Mouse in Vietnam isn't exactly well drawn or masterfully animated, but then, it doesn't/didn't need to be to get its anti-war sentiments across. As Milton Glaser explains at Buzzfeed, "Well, obviously Mickey Mouse is a symbol of innocence, and of America, and of success, and of idealism — and to have him killed, as a soldier, is such a contradiction of your expectations."
As an added attraction, an old protest song
from Country Joe & The Fish:
Posted by Abraham at 2:26:00 PM