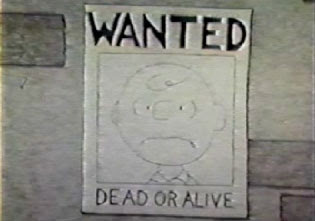 OK, yet another student short film from Cal Arts as our Film of the Month. (The other is April 2015's Happiest Monster [2006]; unlike what some online sites report, Bambi Vs Godzilla [1969], our short film for September 2009, is a student film from Art Center, not Cal Arts.)
The maker of Bring Me the Head of Charlie Brown, Jim Reardon, has since gone on to a successful career that includes a long stint (1997-2005) at The Simpsons and the credits "screenplay" for Wall-E (2008 / trailer), and "story" for both Wreck-It Ralph (2012 / trailer) and Zootopia (2016 / trailer). Like many of the short films we present, possible copyright issues pretty much ensure you'll never see this one on television — and also probably explains the miserable quality of the online version.

"The creator of this picture wishes to state that he does not in any way wish to tarnish or demean the beloved characters of Charles M. 'Dutch' Schultz's comic strip, Peanuts. No malice or damage to their goodwill was intended. So please don't sue me, because it will drag through the courts for years, and I haven't got a lawyer — and besides, you've already got half the money in the world, and I haven't got any. OK?"
Jim Reardon

Bring Me the Head of Charlie Brown:

Bring Me the Head of Charlie Brown is 100% less a short film than it is a faux trailer, but who wants to be that pedantic? "Sponsored by Madison Farms, makers of Ding Dongs, Twinkies, Pooftas and Wussycakes," the short advertises an upcoming Charlie Brown TV special in which the Great Pumpkin puts a bounty on Charlie Brown's head and the rest of the Peanuts Gang try to collect it. At first the wimpy loser that he always is, Charlie Brown finally "unleashes the beast within" and not only goes postal, but discovers he has testicles and gets the girl.
Supposedly, Jim Reardon's original inspiration for the film came from a National Lampoon parody of TV Guide, which listed the show Bring Me the Head of Charlie Brown; we were unable to confirm or dis-confirm this factoid. The title, in any event, is an obvious reference to Sam Peckinpah's Bring Me the Head of Alfredo Garcia (1974 / trailer), while Lucy shooting Charlie Brown in the back refs Peckinpah's Wild Bunch (1969 / trailer). There are also obvious nods to Taxi Driver (1976 / trailer) and Arnie and a variety of pop culture references of the time (1986) that probably no longer make any sense to many people today.
Oddly and famously enough, Reardon got sloppy with his credits and incorrectly credits the closing song, the 50's classic Charlie Brown (written by Jerry Leiber and Mike Stoller), to the Platters instead of the Coasters* (who were, by the way, the first group inducted into the Rock and Roll Hall of Fame, in 1987).

* "Leon Hughes is the only surviving member of the original Coasters. Some of the former members suffered tragic ends. The saxophonist King Curtis (the "fifth Coaster") was stabbed to death by two junkies outside his apartment building in 1971. Cornelius Gunter was shot to death while sitting in a Las Vegas parking garage in 1990. Nate Wilson, a member of one of Gunter's offshoot Coasters groups, was shot and his body dismembered in 1980. Former manager Patrick Cavanaugh was convicted of the murder, which took place after Wilson threatened to notify authorities of Cavanaugh's intent to buy furniture with stolen checks. Cavanaugh was convicted of the murder and given the death sentence in 1984, but his sentence was commuted to life in prison. He died at 60 in 2006, in Ely State Prison, in Nevada." (Wikipedia — status: Nov 2016)
Posted by Abraham at 9:59:00 AM