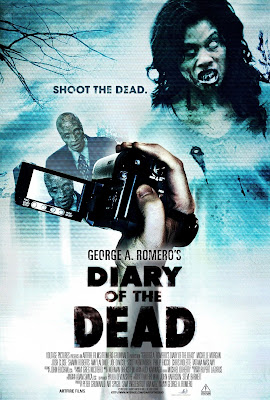 Over the course of film history, there have been some pretty big changes in the lore of the zombie. If in Victor Halperin's pre-code White Zombie (1932 / trailer) the zombies were still not exactly dead, most sure appeared to be by the time of I Walked with a Zombie (1943 / trailer) and they all definitely were by the time of Hammer's voodoo-controlled zombies in Plague of the Zombies (1966 / trailer); then, but two years later, in George Romero's Night of the Living Dead (1968 / trailer), they weren't just dead, they were hungry.

Nowadays, even the rare voodoo-generated zombie is most likely both dead and hungry, while the creatures on the whole can be either shamblers or sprinters, meat-eaters or brain-eaters, unthinking or intelligent, dead or alive, scary or funny — hell, going by Warm Bodies (2013 / trailer), not to mention Rotting Hill (2017), our Short Film of the Month for April 2017, they can even fall in love. 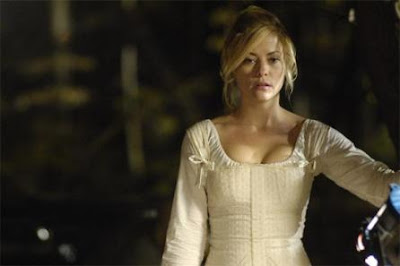 George Romero (4 Feb 1940 – 16 July 2017), however, generally preferred them dead, hungry, slow and meat-eating, although his dead are known to gain cerebral sentiency (see: Day of the Dead [1985 / trailer], Land of the Dead [2005 / trailer] and Survival of the Dead [2010 / trailer]). For a long time, however, his zombie movies have not been very scary, and the humor (if present at all) too dry or ironic to truly notice, and the allegorical message or theme loud and overt instead of subtle. Diary of the Dead is no exception — and not very good, if you get down to it. 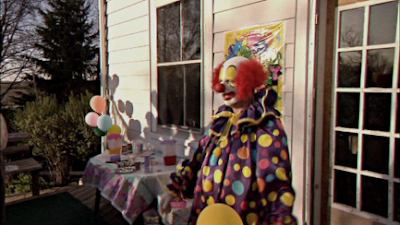 The story involves a group of college students and their alcoholic professor Andrew (Scott Wentworth) in the midst of filming a college project, a no-budget mummy flick, when the zombie holocaust breaks out. Two of the group, Ridley (Philip Riccio) and Francine (Megan Park), leave to Ridley's nearby home, while the rest head off with director Jason (Joshua Close of In Their Skin [2017 / trailer]) to get his girlfriend Debra (Michelle Morgan), the omnipresent and all-explaining narrator of the movie, and then travel through Pennsylvania to find her family. Along the way, Jason documents everything from behind the camera, ostentatiously to document the truth, but more so because he, too, is one of the many of the contemporary world that prefer to film than participate — just, where most people have a Smartphone, he has a product-placement camera. All along the way, society falls as the dead increase... 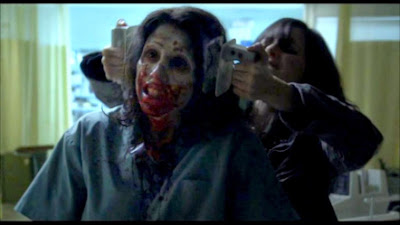 Obviously enough, Diary of the Dead uses the "found footage" technique — pioneered in Cannibal Holocaust (1980 / trailer) and made popular by Blair Witch Project (1999 / trailer) and long a flogged-dead horse — to create a megaphone critique of the contemporary media and its dehumanizing effects as well as mankind's estrangement from itself, not to mention the unreliability of the news media and how the powers-that-be spin it. (Today, "the fine people" of either side could, depending on their core beliefs, also interpret the film as an expose of the "fake news" that Trump and his followers eternally decry, or of the Trump government's addiction to spinning "untruth" as reality.) 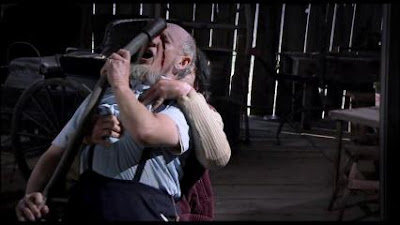 When it comes to Romero's intention to create a critical movie, it is hard to fault the film: intention and structure remains 100% true to one another, and just in case neither they nor the events allow you to catch the critique and criticism, Debra brings both to your attention a couple of times like some judgmental and didactic teacher who has long given up on the intellectual capabilities of her class. Perhaps one of the most theme-bludgeoning scenes of the movie is the last: When Debra reviews some scenes Jason caught underway of some fine American citizens (as in rednecks) blasting away at undead they have hanging in trees, after they blow away a living-dead woman hanging by her hair and all that is left is half a face, Debra intones "Are we worth saving? You tell me." as a badly made droplet of CGI blood trickles from an eye of the half-face like a teardrop. It is a portentous scene that generates all the laughter it wasn't intended to, as well as an insane desire in the viewer to throw popcorn at the screen. (Teacher, may we go to the bathroom?) 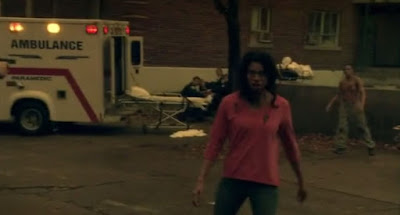 Due to the insistency and constancy of the movie's sermon, everything else in the movie suffers. Characterization is minimal at best, if unbelievable. As capable as the Texas babe of the movie is — Tracy (Amy Lalonde of Heartstopper [2006 / trailer] and 5ive Girls [2006 / trailer]) — less than ten minutes after her beau, Gordo (Chris Violette), bites the dust and she puts a bullet through his head, her main concern is lip gloss. Doesn't compute. Later, in a tissy fit due to Jason's placement of project before person, she just ups and leaves all her friends in a lurch — doesn't compute. And Debra: she travels across Pennsylvania to her family, and though upset to find that they have turned, basically never looks back or thinks twice about them (indeed, going by her voiceover, the loss of her dick-ass boyfriend Jason bothers her more than her family). Alkie Andrew, always so quick to help throughout the movie despite inebriation, not to mention a crack-ass bowman, suddenly prefers to watch Eliot (Joe Dinicol of The Marsh [2006]) die onscreen when he would well have had the time to run and intervene (if only by loudly sounding a warning); and Jason cares enough about other people go get his girlfriend, but is so obsessed with filming that he won't help Tracy nor save himself? He literally films his last zombie until it bites him, instead of using the camera as a weapon or simply dropping (or lowering) it and running. Okay, to accept the concept of zombie apocalypse does mean stretching the possabilities or reality, but is too much to ask for realistic character development and human action? 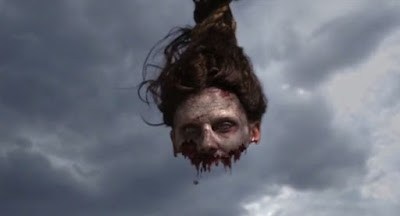 OK, let's accept that in stressful times people act oddly or inconsistently. But a horror movie should also at least have a certain level of scariness and suspense at times, and Diary of the Dead has little of either — in part, admittedly, because, at least in Romero's movie, the found-footage style generally kills both anytime there is a situation that should have one or the other. (Rather unlike, say, in the highly effective Spanish semi-found-footage, quasi-zombie flick, [REC] [2007 / trailer].) It also doesn't help that the special effects seriously suck most of the time in Diary: maybe the dead look dead and real enough, as do the intestines spilling out of a body as it rolls off a bed, but most of the CGI money shots — suicide by sickle, melting head, whatever — look cheap and unreal and added after the fact. And considering how much Romero always insisted the dead should move slow, some of them are pretty damn fast: the first ones of the movie, an immigrant family, seem to be direct descendants of Speedy Gonzales, while others seem to have the ability to teleport themselves into a situation, or walk faster than one can run. 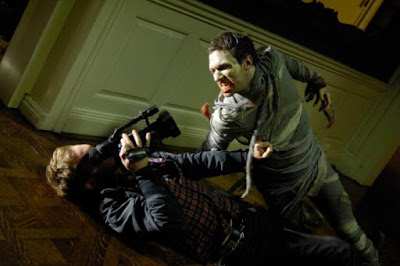 In the original Night of the Living Dead, the first film of the kind, the fact that the living dead always seemed to know where the living were was not bothersome because the situation was so new that logic was suspended. By now, however, the fact that dead always show up — even in droves, for the final scene — and always seem to know exactly where the living can be found, is a bit bothersome. Can they smell them? Hear the heartbeat? Was this coverd in an earlier film and we missed it? Much like all of Romero's color living-dead flicks, Diary of the Dead ends with the fate of many characters, major and minor, left open. (Seeing that the film is narrated in past tense, however, Debra obviously survives.) But unlike in Dawn of the Dead (1978 / trailer), one doesn't really care enough about the survivors to wonder their fate — other than the plucky Texas belle Tracy, that is. (Hope she found a new boyfriend, or at least some lip gloss.) 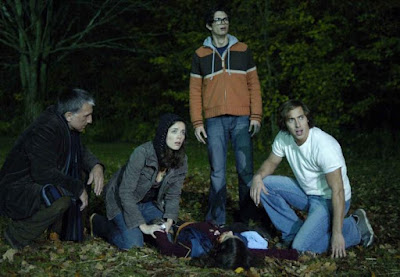 Diary of the Dead, hardly imperative viewing, is at least a breather from all the humor-heavy zombie movies that saturate the screen of today, for it is very, very serious. If it were only a little better, as well... 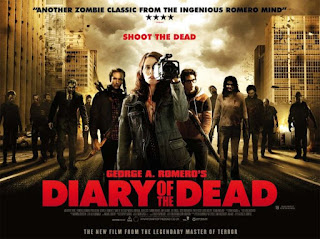