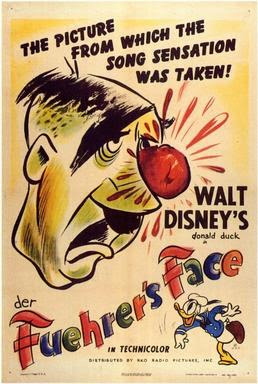 Originally filmed as Donald Duck in Nutzi Land. Directed by Jack Kinney, the "German" oom-pah song, written by Oliver Wallace, is actually older than the short: Spike Jones had released a version some time earlier; the song is, if you get down, to it, the inspiration of the film, which then took the name of the song.
Of all the Donald Duck films ever made by Disney, nine were nominated for an Academy Award. And of the nine, this one here is the only one to have won one: on March 4, 1943, it won the Academy Award for Best Animated Short Film at the 15th Academy Awards, even beating the similarly minded animated piece of propaganda from George Pal, Tulips Shall Grow, which unlike this Disney short the film was selected, in 1997, for preservation in the United States National Film Registry by the Library of Congress as being "culturally, historically, or aesthetically significant".
Yeah, unlike that short, this short was pretty much kept for decades in the lowest back drawer of the dungeon far beneath Sleeping Beauty's castle, ignored and mostly forgotten. (But not by us! And a few others — in 1994, it was placed Number 22 in Jerry Beck's book The 50 Greatest Cartoons: As Selected by 1,000 Animation Professionals.) Nevertheless, it is perhaps easy to understand why Disney preferred to ignore its existence for so long: not only does everyone's favourite duck literally say "Sieg Heil!" countless times, but there are some (by now) pretty embarrassing stereotypes are to be seen. Enjoy
The Academy Award for Best Live Action Short, by the way, went to Joseph M. Newman's Don't Talk, presented below as an extra. Joseph M. Newman went on to direct one of everyone's favourite sci-fi horror flicks of the 50s, This Island Earth (1955 / trailer).