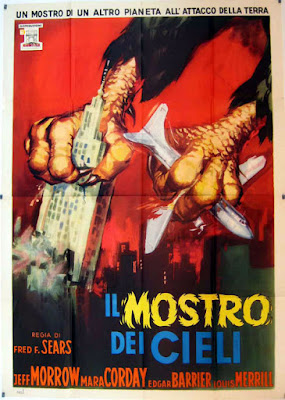 "The Giant Claw is every bit as unrepentantly bizarre as any Japanese or Korean creature film, and in exactly the same characteristic way. It is, so far as I’ve seen, the only true American kaiju."
1000 Misspent Hours

AKA The Mark of the Claw. A classic "bad film" high on our list of films to see — and as it easy to get online, we plan to see it soon. Director Fred F. Frears's short career — he died at the age of 44 (7 July 1913-30 November 1957) — was spent entirely at Columbia, where he was a regular collaborator with the legendary producer Sam Katzman (7 July 1901-4 August 1973), the man behind many a trash classic and not-so-classic, as well as one or two real classics, such as Earth vs. the Flying Saucers (1956 / trailer), which Frears also directed and featured special effects by the great Ray Harryhausen. Harryhausen was originally intended to do the effects for The Great Claw, also, but was replaced by some cheap model makers in Mexico City who supplied the legendary marionette that makes the movie what it is.
The story of The Giant Claw (1957), written by Samuel Newman (Invisible Invaders [1959 / trailer]) and Paul Gangelin (The Mad Ghoul [1943 / full movie] and The Boogie Man Will Get You [1942 / full movie]), is as follows: "Engineer Mitch McAfee (Jeff Morrow) is conducting a test flight of radar equipment for the Air Force in Alaska when he reports that his plane has been passed by something as big as a flying battleship. This is disbelieved back at base but he persists with his claim. Soon after, he is proven right as air traffic is attacked amid further reports of a giant flying bird. The Air Force attempts to shoot the bird down but it proves impervious to any type of attack. Scientists then realise that it is an alien creature made of antimatter, which is causing it to be invisible to radar and capable of projecting a shield to protect itself from any attack." (From: The Science Fiction, Horror and Fantasy Film Review) 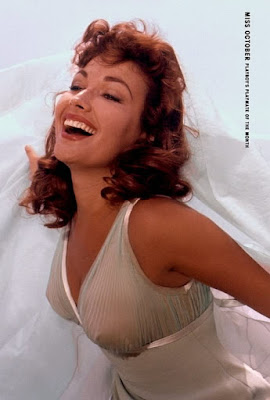 The Great Mara Corday
The babe of the film, "Sally Caldwell", is played by the exotically beautiful cult actress Mara Corday (born Marilyn Joan Watts on 3 January 1930), the Playmate of the October 1958 issue of Playboy (34-24-35, D cup) and an extremely popular cheesecake model of her day. Her most famous movie is undoubtedly 1955's Tarantula (trailer), and she can also be found in the not quite as entertaining "bad movie" The Black Scorpion (1957 / trailer).
Watch, gape at, and enjoy the trailer to
The Giant Claw: