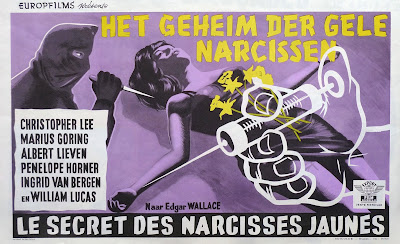 (Spoilers.) Based on the original Edgar Wallace novel The Daffodil Mystery, producer Horst Wendlandt made this film as a joint production with the British production firm Omnia in London. As a result, aside from the extraordinary amount of exterior scenes for a Wallace film (which usually tend to be studio-bound), two versions of the movie were filmed simultaneously, one in English and the other in German. Although both versions utilised the same crew and most of the same secondary and background actors, the lead roles were filled by different "stars", depending on the language. In the English-language version, entitled The Devil's Daffodil, William Lucas (of Vampire Cop [1990 / trailer], The Shadow of the Cat [1961 / full film] and Tower of Evil [1972 / trailer]) starred as Jack Tarling instead of Joachim Fuchsburger, Penelope Horner was Anne Rider instead of Sabine Sesselman and, unbelievably enough, Klaus Kinski was replaced by Colin Jeavons as Peter Keene. In truth, however, no matter which version of the movie one sees,* Akos Ràthonyi's unbelievably lifeless direction remains the same. Thus, of course, the final cinematic experience also remains the same: Das Geheimnis der gelben Narzissen is a dull sleeping pill, a snoozer that in no way requires re-evaluation, rediscovery, or even your attention when nothing else is on the tube. 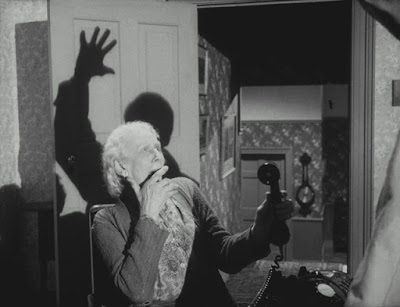 * We watched the German version. 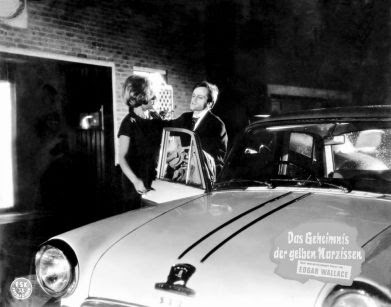 Not that it had to be so. The convoluted script, generally attributed to Basil Dawson and Trygve Larsen (real name: Egon Eis), had a lot of potential and features — amongst other aspects — a sleazy club, drug smuggling, addicted showgirls, a nameless killer, a mysterious Chinese man (an always fun to watch Christopher Lee, practicing for his future starring role in the Fu Manchu movies), a duplicitous Scotland Yard detective, a torture scene, and a bevy of dead babes (and other victims). That the final cinematic result is such a drag can indeed only be blamed on the director, who obviously had no interest at all in the project. That Ràthonyi had some 25 years experience as a director — he began making films in his native land of Hungry in 1936 — is not anywhere evident in plodding and dull direction found in Das Geheimnis der gelben Narzissen.* 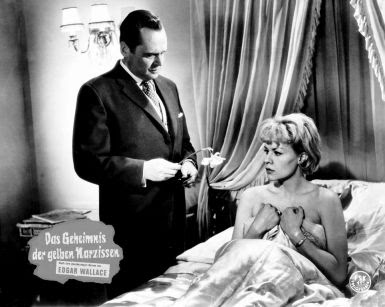 * While it is probably impossible to ever find out if his earlier, Hungarian projects were any better, he did make an entertainingly pleasant if not overly innocent and extremely dated vampire film in 1964 entitled Der Fluch der grünen Augen, a.k.a. Cave of the Living Dead or Night of the Vampires (full film). Ràthonyi died five years later in 1969, a year after ending his unspectacular career with the ultra-trashy and unfunny "sex comedy" Zieh dich aus, Puppe (opening 8 minutes). which translates literally into "Get Undressed, Doll." 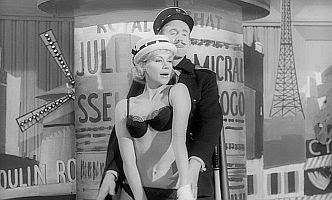 The German title Das Geheimnis der gelben Narzissen, if literally translated into English, would be "The Secret of the Yellow Daffodils." To talk of any mystery or secret about yellow daffodils is a bit aside from the point, however, for the "secret" is revealed within the first few minutes of the film, when Jack Tarling (Joachim Fuchsburger), the security officer of Global Airways reveals how hollowed out plastic daffodils are being used to smuggle drugs into England. Tarling is convinced that the drug are somehow tied to a series of murders in which the female victims are always found with daffodils, but Scotland Yard seems convinced that the dead girls are all victims of a sex murderer. Tarling barely escapes a bomb attack that destroys the intercepted shipment (and kills a few cops), but with the help of his inscrutable Chinese assistant Ling Chu (Christopher Lee) he traces the shipment back to the China Export & Import firm, run by Raymond Lyne (Albert Lieven). Interestingly enough, Lyne also owns the infamous Cosmos Club, where many of the dead girls had worked. Lyne, however, cannot be held accountable for anything and firm co-worker who originally placed the order is soon fished out of the Themes. Bad girl Gloria (Ingrid van Bergen, who in real life served 5 years for manslaughter after shooting her 12-years-younger lover Klaus Knaths in a fit of jealousy on February 3rd, 1977) gets to do a truly entertaining "bawdy" stage number, heroine Anne Rider (Sabine Sesselmann) is continually sexually harassed by her boss Lyne, Ling Chu eventually tortures the answer to everything from bar manager Jan Putek (Peter Illing), a lot of people die, and Peter Keene (Klaus Kinski) wanders around a lot before he finally flips his wig and kidnaps Anne, intent on killing her in a cemetery... 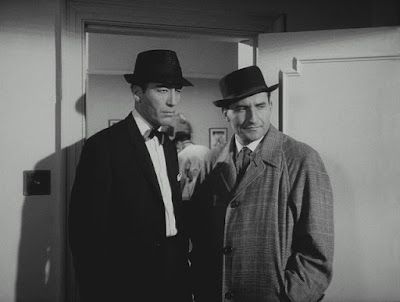 All this happens to an exceptionally competent and jazzy score by the unjustly unknown and forgotten Keith Papworth. Sound good, doesn't it? Well, as said before, thanks to the director, it ain't. 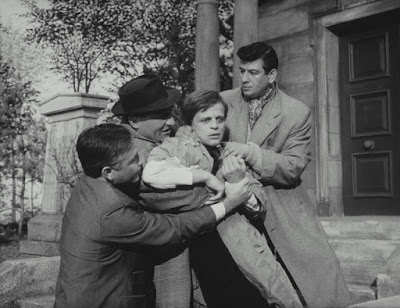 I am interested in the English version of The Daffodil Killer with Colin Jeavons. The film, stills, anything about this version

Can't help you much, my friend, but it would seem to us that is what the internet is for... finding the obscure, the rare, the lost.