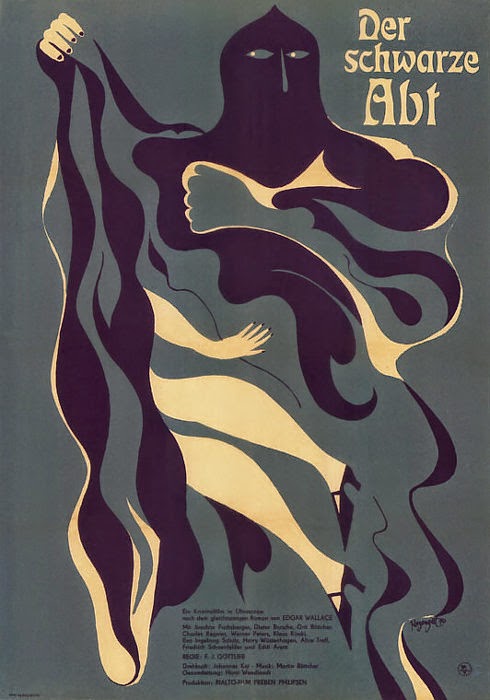 Whether or not one views Der Schwarze Abt aka The Black Abbot as the 13th or 15th of the German post-war Wallace series depends how you look at it: two earlier Wallace films of the 15 to the date of this movie's release, Der Racher / The Avenger (1960 / German trailer) and Der Fluch der Gelben Schlange / The Curse of the Yellow Snake (1963 / German trailer), were not Horst Wendlendt Rialto productions; purists, therefore, do not count them as among the "real" German Wallace films, despite the fact that they also shared many of the same actors and, in the case of Der Schwarze Abt and Der Fluch der Gelben Schlange, the same director, Franz Josef Gottlieb (1 Nov 1930 — 23 July 2006).

We took a small look at Der Schwarze Abt last year in Part II of our RIP career review of Joachim "Blacky" Fuchsberger, where we call it the 13th Wallace film. Recently we had the pleasure of re-watching it, and while it really wasn't quite as good as we remembered, we did enjoy it — as did our company that evening, who had last seen the movie around 30 years ago, when she was a wee lass much too young to even be described as prepubescent; she marveled greatly at the fact that once upon a time, the movie scared her poopless. It didn't now, and won't anyone — unless the viewer happens to be too young to even be described as prepubescent.

The Black Abbot is often claimed to be the first Wallace film to move away from straight crime and into the "Gothic", we would tend to disagree: Harald Reinl's Der Fälscher vonLondon (1961 / trailer), which shares the same castle as its setting — Schloss Herdringen as Chelford Manor (Abbot) or Longford Manor (Fälscher) — also moves well into the Gothic, possibly even more so due to the movie's Expressionistic touches and all the scenes of Jane (Karin Dor) running around darkened hallways in her white nightgown.

Between the two movies, we really must say that Reinl's film is the superior one, which isn't to say that the movie here doesn't have its high points, including an exceptionally effective Klaus Kinski as the two-face butler and a convincingly nutso Lord Harry Chelford (Dieter Borsche of Der Henker von London [1963 / trailer], Die toten Augen von London [1961 / English trailer] and Der Pfarrer von St. Pauli [1970 / TV trailer]).

Like all Wallace films, the plot is confusing and difficult to follow and pretty all over the place, but unlike so often in the series, the ridiculous aspects and the logical parts do jell to create a relatively comprehensible and linear plot, providing you listen closely. Hell, even the first murder gets explained, as does the whole subplot involving an old lady in black that shows up once or twice and a bearded man who pops up out of nowhere to steal documents from a secret passage. So listen carefully and you'll be able to follow the plot as well, despite all the characters that flit in and out and about the movie. (Red Herrings and too many characters are the salt and pepper of German krimis, after all.)

The two main threads around which the film is constructed and the bodies fall are, firstly, that of a lost hidden treasure at Chelford Manor and, secondly, the lead female Leslie Gine (Grit Boettcher of Der Mönch mit der Peitsche [1967 / German trailer] and [Der Tod im roten Jaguar 1968 / German trailer]), a relatively colorless and uninteresting woman that, for some odd reason, a variety of men are enamored with — including her arranged husband-to-be, the slightly unhinged Lord Harry Chelford (Dieter Borsche), who's also obsessed with finding the treasure, the crooked Fabian Gilder (Werner Peters, of the masterpiece of East German post-war cinema, Der Untertan aka The Kaiser's Lackey [1951 / German trailer]), and the possible good guy Dick Alford (Joachim Fuchsberger), who is reticent about his feelings as she is promised to his cousin Lord Harry Chelford, for whom he works as steward of the manor. Other figures of more and lesser importance slink around in the shadows of the castle, all pursuant of their own secret or not-so-secret agendas. Who is the good guy and who is the bad? For most of the movie you don't know, though you can be assured that, like the wet-rag lead female lead, the Scotland Yard Detective Puddler (Charles Regnier of A Study in Terror [1965 / trailer]) and his comic sidekick Horatio W. Smith (Eddi Arent) are good guys.

While an enjoyable Wallace, and perhaps even one of the better ones, The Black Abbot is a bit slow now then, visually and narratively. Some of the camerawork is rather inventive, if not humorous, but often enough it is also rather staid and stiffly blocked. Also, there is a lot of dialog in the movie: sometimes it seems as if all that really happens is that characters meet and talk, and then meet others and talk, and then re-meet again and talk. Nevertheless, there are a few murders and the big showdown in the cellar (if somewhat clumsy in how its staged) is fun enough and nicely ironic and is pretty good — though, as often is the case in the Wallace films featuring Eddie Arendt playing a dolt, he shows up to do a last gag which ruins the mood. Still, on the whole The Black Abbot is a fun and entertaining krimi and Wallace flick, and perfect for a rainy afternoon. 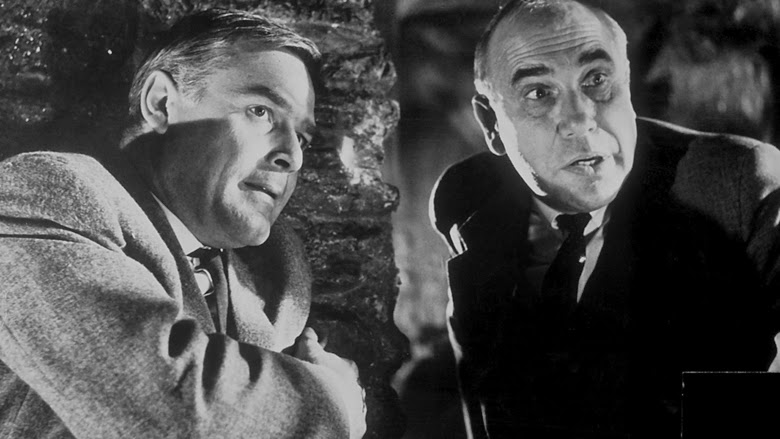 Director Franz Josef Gottlieb, by the way, was a highly prolific Austrian director. He followed The Black Abbott, his first Rialto Wallace film, with yet another Rialto Wallace film (Der Gruft mit dem Rätselschloß [1964 / German trailer]), a couple of Bryan Edgar Wallace films, a few Wallace imitations, an even larger number of dumb sex comedies, and a couple of low-brow classics, including the eternally entertaining Lady Dracula (1977 / German trailer). 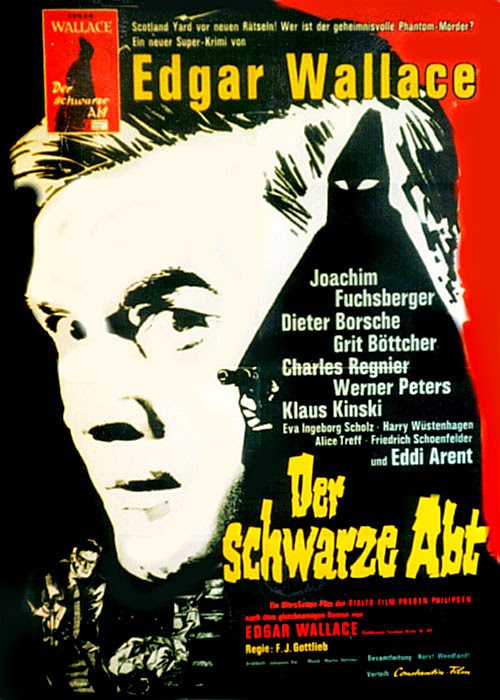