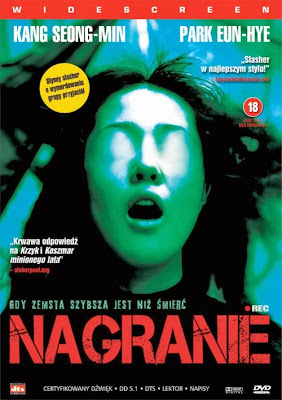 (Spoilers.) Over here in Germany, the DVD release (shorn of probably the movie's best and bloodiest 4 minutes) was saddled with the rather incongruous title Fear No Evil; the English-language title Record is without doubt much more on the mark, as home video plays such an important aspect to the movie's plot... but title and censored gore aside, what is perhaps truest about this film is that it is no wonder that most of those involved don't seem to have made another film — we really hope that none of them quit there day job to take part in this thing.* 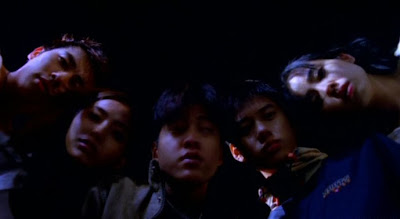 Which is not say that the movie, a slasher, has absolutely no redeeming values, it's just that its redeeming factors don't add up to a worthwhile film, as in the end there are only three: the fact that it's an Asian (Korean, to be exact) horror film that for a change isn't about some white-faced, long-haired, all-powerful ghost, and it features a hilarious and unexpected event that interrupts the fiery immolation of a "dead" body as well as a singular mildly innovative shock scene involving a cell phone and arm. 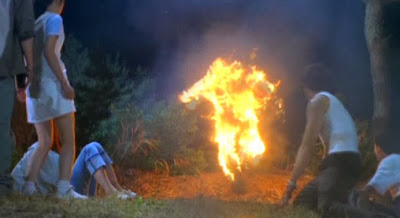 As just mentioned, Fear No Evil stands out as a rarity in that it is a Korean slasher flick, one modeled after the standard American template that hasn't changed all that much since first introduced who knows when. (Most people like to credit Carpenter's Halloween [1978 / trailer] as the genre's granddaddy, but while that film may arguably have been the one to start the modern Golden Age of Slashers, the genre itself can arguably be traced back to Coppola's Dementia 13 [1963 / trailer / full movie], Powell's Peeping Tom [1960 / trailer], or — if you're of the type that see slashers and bodycount films as one and the same — even the now rather dull films Terror Aboard [1933] or Thirteen Women [1932 / song about the film], the latter an early Myrna Loy film that holds the distinction of also being the only surviving film featuring a credited Peg Entwistle.**) In regards to the slasher template, Fear No Evil follows it so closely that for a while one is almost convinced that the film is meant to be ironic but that like, say, Tim Burton's non-slasher Planet of the Apes (2001 / trailer), the filmmakers play with the tropes so closely that it becomes impossible to see that they (and the film) are not being 100% serious. But after a while, it becomes obvious that in the case of Fear No Evil, at least, the film is less knowingly ironic than it truly is simply by-the-numbers and seriously sub-standard. 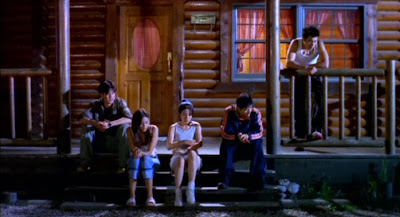 Like so many a dead-teenager flick, the driving instigation behind the revenge killings in Fear No Evil is the classic prank that goes wrong. In this case, prank played by the school's best (two babes, three dudes) on the school loser. The babes, sorta plain Hui-jung (Seong-min Kang) and hot stuff Eun-mi (Chae-young Han, "Korea's Barbie Doll" and only participant to have achieved a subsequent show biz career, in her film debut), invite the eternal loser to join them for a weekend alone at a secluded cabin as the set-up, unknown to the loser of course, to film a fake snuff film. But when the three dudes show up to play their parts as the masked killer home-invaders, they unintentionally use a real knife (!?!) and don't notice, until it is too late, that it not only punctures the boy's chest but that there is real blood everywhere — the latter is odd indeed, as obviously no one thought to bring fake blood with them in the first place. (As a whole, the events of the set-up give the viewer the feeling that if the five students are truly examples of South Korea's best and brightest, than the future of the region may indeed lie in the North.) 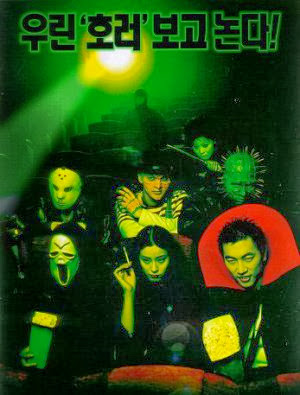 Needless to say, like the much better I Know What You Did Last Summer (1997 / trailer), the movie Fear No Evil emulates most closely, the five students don't want to ruin their futures due to the "accident" and decide to destroy the body (and the self-made video of their deed) — an event that also goes hilariously wrong. Nevertheless, convinced all is OK, they swear themselves to secrecy. But then, a year later, not only is the "snuff film" video online, but a masked killer in a red jumpsuit is out to kill them one by one... Five students being a relatively low number for a body-count movie, however, the unknown and unstoppable killer also does away with an occasional innocent (elder sauna worker, MILF school nurse, ambulance attendant, policeman) as well. 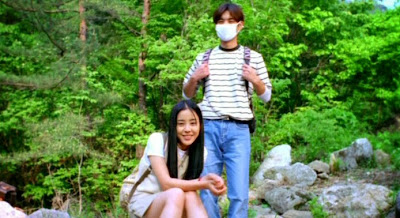 Our DVD version, cut, is hardly the most bloody of films, so we'll reserve comment on the gore, but we must state that seldom have we seen a film in which teenagers, conscious that someone is out to kill them, so consistently find a reason to separate or go somewhere alone. Indeed, they do it so consistently they could well have all worn "Kill Me, Please" signs on their backs — but as stupid as their actions are in this regard, they do give cause for regular laughter. Likewise, the killer(s) — yes, a nod to Scream (1996 / trailer) is at hand as well — are so obvious, that they each could just as well have worn a sign on their back saying "I'm a killer". Needless to say, on the whole Fear No Evil is rather lax when it comes to suspense or tension... 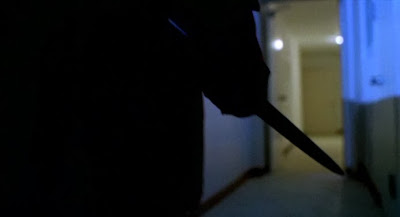 For that, it is mildly funny in a bad film sort of way. Aside from the above, who can't break out in guffaws when one student flirts with the MILF nurse by saying something to the effect of "I've got heat pimples on my inner-thigh, you want to see them?" Likewise, it is sort of amusing when the final girl and guy consciously hunt for the killer — they don't know it's more than one, of course — and then, when they finally find him, lose their cool and start running around like to chickens without heads. The fun ridiculousness of that bit is topped soon thereafter when, after surviving that, they end up having a wham-bang showdown with the second killer, who appears to be as unstoppable as Arnie in the first Terminator film (1984 / trailer). (A fun scene, perhaps the best of the movie.) As always, however, the filmmakers simply don't know when to stop and throw in a final after-graduation scene with a twist from left field that is as aggravating as it is prefatory to a possible sequel. 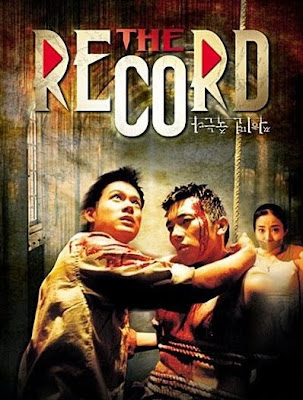 So is Fear No Evil any good? Not really, but as derivative and idiotic as it is, there are many far worse slashers out there, many of which you find reviewed elsewhere on this blog. The end question is, does the fact that there are worse films out there really make it worth your time to watch this movie? In our humble opinion, your money would be better spent on kimchi... 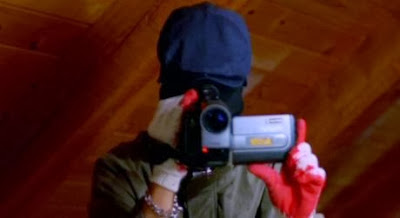 Antipodal to Fear No Evil —
a trailer to film that doesn't exist:


* Jae-hwan Ahn, who plays the wimpy teacher in the movie, no longer has to worry in this regard: he killed himself in 2008 at the age of 36.
** In the case of the last two and earliest films, however, it must be said that they are definitely far less slashers than body counters, while with the exception of Dementia 13, all the historic precursors listed — including Halloween — listed lack a key ingredient of the modern slasher: that the killer remains unknown until the final showdown.
Posted by Abraham at 12:58:00 PM