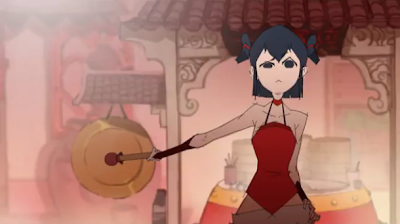 "What a waste of food"

Written by Cloverxie and Jin Roh, the latter of whom also directed. When we first saw this cute little film, we assumed that it was a parody of the modern Asian sock-em-chop-em film, complete with terrible subtitles. Only recently did we learn that this slightly more than 8 minute long and under-known animated treasure — complete with a quick nipple shot — is indeed truly from China; Shanghai, to be exact, "the largest city by population in China and the largest city proper by population in the world" (Wikipedia). It is a product of the small and relatively unknown animation studio Wolf Smoke, which has since gone on to do the three-episode, stylistically similar micro-series, The Bat Man of Shanghai (2012 / full series). And yes, we are talking about the Batman.
Kung Fu Cooking Girls features a strong and appealing style, fast action and a simple story, and never fails to make us smile when we watch it. To simply quote the Wolf Smoke webpage, the "background of this short set in a Chinatown in a fictional time, and the town is very hustle and bustle every day. As the saying goes, the person of the same trade is enemy. In order to attract more customers, a young talented Chinese girl and an extraordinary western lady open a duel with each other. Since we put the elements like Kung Fu and cooking into this short, of course, there should be lots of delicious foods. A joy and yummy comedy [...]!"
Their disingenuous plot description is, of course, a smokescreen to hide the true thematic of their subversive yet appealing film so as not to run into trouble with the powers that be. Kung Fu Cooking Girls is, in fact, much more than just a "yummy comedy". The narrative is actually a symbolic manifestation of the capitalistic conflict between the East and the West, personified by the Asian and Western female cook and their proffered wares, to capture the commercial trade of the less affluent underdeveloped countries, personified by the itinerant youth. As is often the case in real life, the simple needs of the object of possible capitalistic exploitation are overlooked and lost in the heat of the globalist battle, thus forcing the less affluent to look elsewhere.
As the final, mildly lesbian-tinged credit sequence of Kung Fu Cooking Girls indicates, life would be better if the capitalistic battle was replaced by love, sweet love....
Enjoy!