Werewolf in a Girls' Dormitory (1962, Italy/Austria) 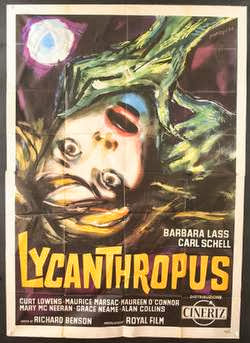 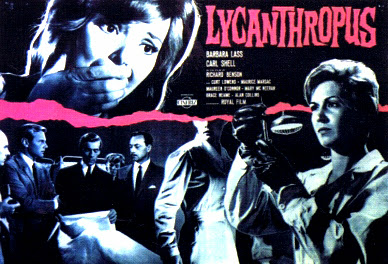 This Austrian-Italian horror film was originally released under the names Lycanthropus (Italy) and Bei Vollmond Mord (Austria/Germany), but when it was brought to the US in 1963 to join a double-bill with Corridors of Blood (1958 / trailer), it was not only given a wonderful pop title track, Ghoul in School, sung by the unknown (possibly studio-created) group named "The Fortunes", so as to increase its appeal to the younger crowd, but was also bestowed with its best-known and catchiest title, Werewolf in a Girl's Dormitory. Tune and title aside, the teens of the day were most likely disappointed by the movie, which is less a teen horror film than an oddly schizophrenic amalgamation of German krimi (ala the German Edgar Wallace films that had just gained popularity in Europe) and Italian Gothic.
Fan-made video: The Fortunes – The Ghoul in School 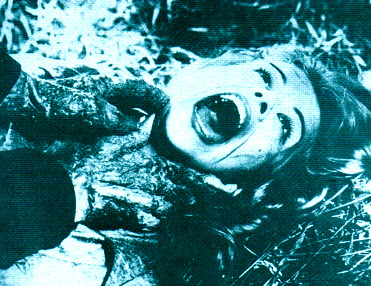 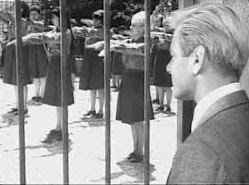 The director of the Werewolf in a Girl's Dormitory, Paolo Heusch (26 Feb 1924 — 21 Oct 1982) is likewise Italian, but the movie's cast is international, with actors and actresses coming from Poland, France, Austria and Germany. (Interesting to note that Heusch, perhaps herewith the director of the first Italian werewolf film, is also the director of The Day the Sky Exploded [1958 / trailer], which many consider to be the first Italian science-fiction film.) Who knows what language Werewolf in a Girl's Dormitory was actually filmed in — as sometimes some mouths actually move in synch with the dubbing, it is conceivable that everyone simply spoke their own language — but the English-language dub does serious damage to the movie. One is often hard-pressed to believe that a native speaker wrote it, particularly when they start talking about this or that "assassinated" person. 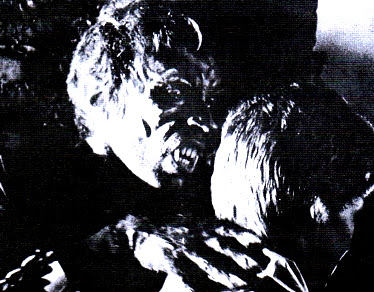 But while the dub, much like some the narrative events, does garner a giggle or two now and then, it, like the whole movie itself, is not terrible enough to make Werewolf in a Girl's Dormitory a truly hilariously and enjoyably bad film event on the level of, dunno, The Brain that Wouldn't Die (1959) or Jail Bait (1954) or Mädchen from the Mambo Bar (1959) or Bloodlust! (1961) or Isle of Sin (1960) or Horrors of Spider Island (1960). Amidst all that is bad, too much is sometimes good — the B&W cinematography, the camera work and compositions, the gothic touch, the intriguing mystery angle — to make Werewolf in a Girl's Dormitory craptastic. The film is an oddity to say the least, for it has enough personality to not truly be simply mediocre, but at the same time is neither good enough nor bad enough to truly be any "good" as a good film or a bad one. 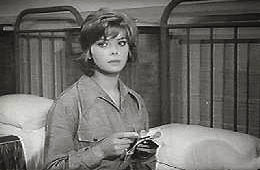 In itself, Werewolf in a Girl's Dormitory is a bit of a misleading title, as although there is a (relatively hairless) werewolf at work in the movie, it not only never enters the dorm, but all the action occurs in and around a girl's reformatory. (Had the film ever been re-released during the women-in-prison phase, it surely would have been called "Werewolf in a Girl's Reformatory".) And it is to this reformatory that the new biology teacher Dr. Julian Olcott (Carl Schell, the least successful of the Schell family of actors, also found in Escape from East Berlin [1962 / trailer]), a disgraced doctor with a secret past. And no sooner does he arrive than does the pretty troublemaker Mary Smith (an unknown Mary McNeeran) get killed on her way home from a midnight visit to the nubile-loving benefactor of the school, Sir Alfred Whiteman (Maurice Marsac, a French-born character actor that can even be found in films as big as How to Marry a Millionaire [1953 / trailer]), whom she has been blackmailing. Two other reformatory gals, Priscilla (the highly attractive Barbara Lass, of Der Pfarrer von St. Pauli [1970 / German trailer], at the time still Roman Polanski's first wife) and Sandy (Grace Neame), saw her slip out into the night, and when Priscilla learns that the dead Mary was blackmailing someone, she decides to find out whom and, she assumes, thus find out who the murderer is. 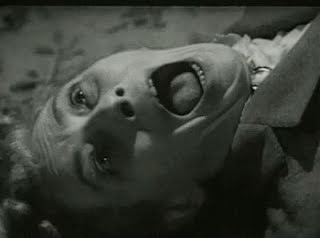 There are is no lack of suspects, either: aside from Dr. Olcott and Sir Alfred, there is the crippled caretaker Walter (Luciano Pigozzi, "the Italain Peter Lore" doing Peter Lore, also found in the background of Alien from the Deep [1989] and Seven Dead in the Cat's Eye [1973]); the seemingly benign director of the school, Dr Swift (war hero and familiar character actor Curt Lowens of, among others, Necronomicon: Book of Dead [1993 / Japanese trailer], Mandroid [1993 / trailer] and The Entity [1982 / trailer]), the teacher Leonore MacDonald (Maureen O'Connor), the aged and icy wife of Sir Alfred, Sheena Whiteman (Annie Steinert), and more... Mrs. Whiteman, in any event, is quickly taken off the list of suspects by falling victim not to the werewolf that killed Mary, but to a mysterious killer wearing black gloves. 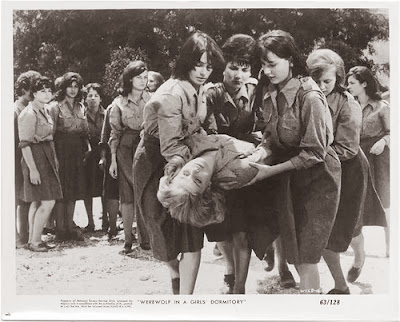 Despite its title and the presence of a werewolf of sorts, Werewolf in a Girl's Dormitory is less a horror film than a somewhat talky mystery film, and as such is a disappointment for those expecting the traditional innocent-cursed-to-kill every full moon. Indeed, the lycanthropy in this movie is not even due to some unnatural curse, but rather to purely biological grounds: a rare malfunction of the pituitary gland that goes haywire when triggered by the full moon is the cause — and damned if Dr. Olcott's past fall from public grace isn't directly tied with his former research into the sickness; research that more than one person at the reformatory desperately wants to get their mitts (furry or leather) on. Mary, in turn, just wants to find out who the killer is, and she continually puts herself in danger to do so. 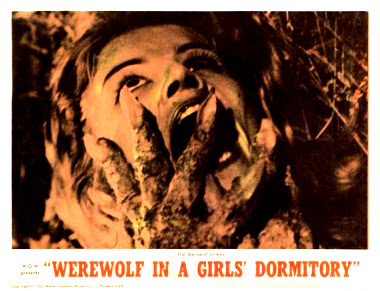 It is the mystery that she so wants to solve that is the true focus of this too-oft slow-moving movie, and Werewolf in a Girl's Dormitory milks the mystery as much as it can, with Mary's suspicions — like those of the viewer — continually shifting directions until both the werewolf and the killer are (disappointingly) revealed to the viewer mid-way into the movie not by any sleuthing on part of Mary, but simply as an element of the plot development. 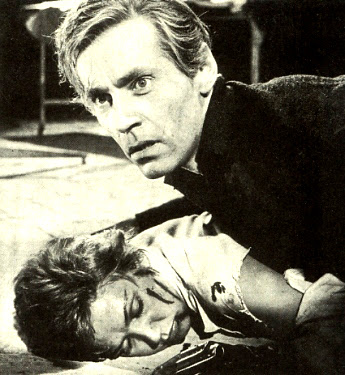 Werewolf in a Girl's Dormitory is one of those movies that we here at A Wasted Life really don't know what to do with. We would like to say that we like it, and we would like to be able to recommend it, but we can't. At best, we can say we enjoyed and found it interesting. But in all truth it does drag, some of the key actors are rather bland, and the script not only offers one too many idiotic turns (such as the scene with the caretaker at the local bar or his later midnight murder of a girl and subsequent death) but is also extremely dialogue heavy — a flaw intensified by the bad dubbing. On the other hand, the Euro-babes are attractive schoolgirl fantasies and the gothic trappings are nice, as are aspects of the direction and both the giallo and mystery elements. However, none of it is in any way helped by the inferior quality of the digital versions of the film available online or as a DVD. 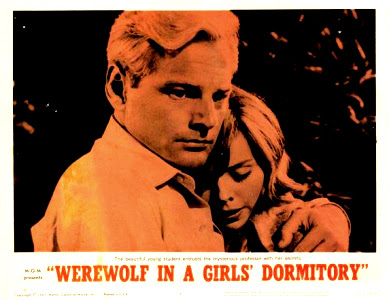 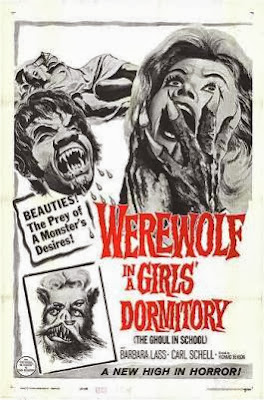 As an extra attraction and just for the hell of it, we would like to present the trailer to I tabù (1964), the second-to-last film produced by Guido Giambartolomei, the producer of Werewolf in a Girl's Dormitory. An early Mondo Cane (1964 / Italian trailer) imitation, the English-language release, entitled Taboos of the World,  is narrated by no one less than Vincent Price...
Trailer to Taboos of the World:
Posted by Abraham at 2:11:00 PM