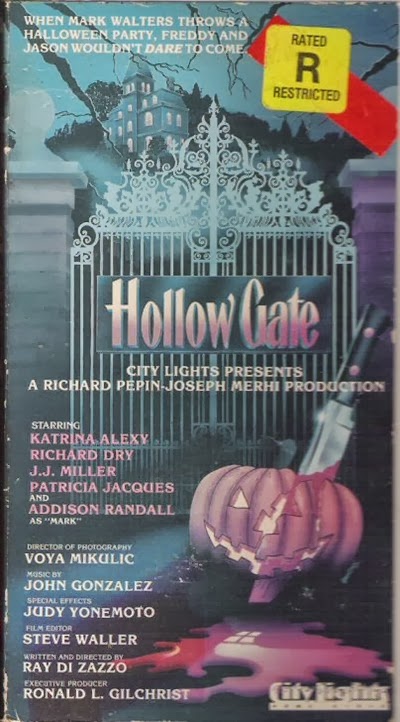 (Spoilers.) As dedicated purveyors of filmic flotsam, we here at A Wasted Life can say with authority that truly crappy films that are nevertheless good due to their very badness are a lot rarer than one might believe. Mediocre bad, like mediocre normal, reigns the day, only surpassed in number by that which is really shitty in a non-entertaining way, which in turn is overshadowed by Hollywood bland. Thus logic would say that if a film is truly prime celluloid feculence and thoroughly career-destroying fun, as in 100% jaw-dropping in its total incompetence, it would gain a certain reputation. Not true, as this film here proves. Indeed, we can't help but wonder how it is that films like Slugs (1988) or Trolls II (1990 / trailer) have gained such a large reputation as enjoyable craptastic cheese and a film of almost equally bizarre inability like this one here can languish in obscurity. 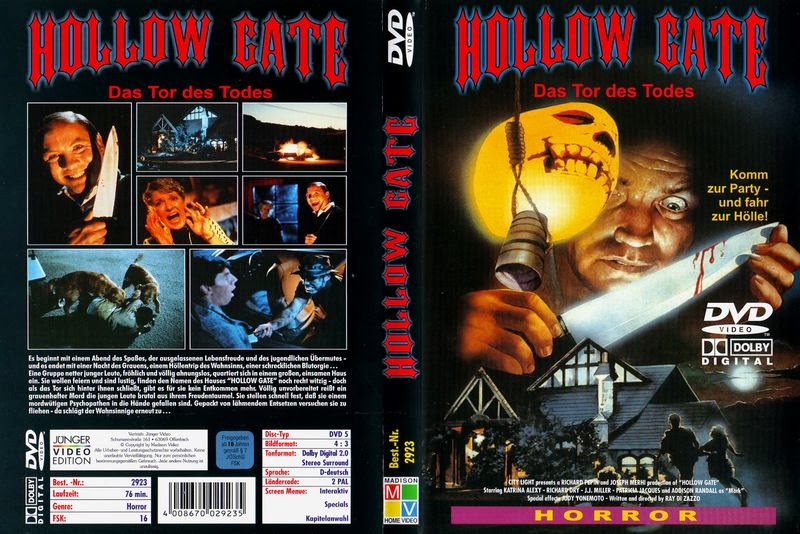 Hollow Gate seems to be piece of regional filmic failure from the state of Oklahoma, a state we for one only ever remember because it's named after a musical (1955) we saw as a kid — a pretty stupid film, too, if you get down to it. (What? The state came first? Surprise, surprise, surprise!)
Trailer to Oklahoma:

Hollow Gate is, without a doubt, if not an example of limited scriptwriting talent on the part of the scriptwriter, then a prime showcase of a total lack of directorial talent on the part of the director. As it is, Hollow Gate was written and directed by one and the same person, an unknown named Ray DiZazzo, "a communication specialist, [who] teaches seminars on improving communication skills in both corporate and personal relationships", and who, as far as we can tell, has yet to write or make another movie. He should probably change his name if he ever plans to do so. The only true saving grace of the movie is that someone actually hired actors of less talent than the director/author and also hired a special effects person (Judy Yonemoto?) for the blood and guts and gore that seems to have more-or-less known what (s)he was doing — though the emphasis here does lean lightly towards "less" and not "more". The resulting concoction is as an unbelievable piece of total incompetence that would be a total bore were it not for the occasional sloppy gore highlights and the constant bombardment of unbelievable ineptitude. True, the film does have many deep points that tend to drag, but really, it also has rather a few enjoyable highpoints that instigate truly deep belly laughs. And as we all know, laughter is good for the soul... 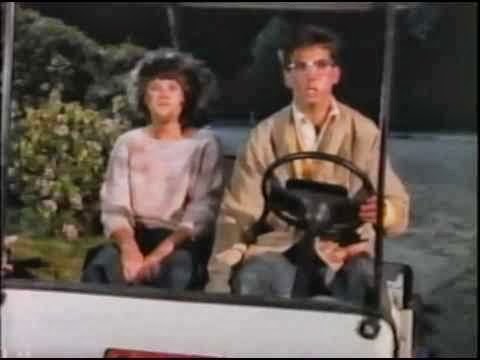 Any way you look at it, Hollow Gate plays out a bit like a color Jerry Warren film (see Teenage Zombies [1959] for a prime example of his product); had that Great Talentless Master Hack ever made a body-counter, one could imagine it might have the pacing and appearance of Ray DiZazzo's movie. Thankfully, however, though DiZazzo evidences little directorial talent in this movie, the little he seems to have is still more than that which Warren ever had. 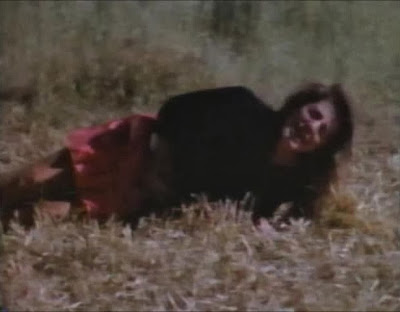 As is typical of the slashers of the day, Hollow Gate begins with an interlude from the past to explain the planting of the seeds that give birth to the maniac of the film. In this case, poor young Mark (Bartholomew Bottoms) is not just dressed in a dorky clown costume for a Halloween party, but when he proves to be incapable of bobbing for apples his alcoholic dad (Richard London of Freeway Maniac [1989 / trailer]) dunks his face deep into the barrel and almost drowns him. Alki dad who hates him and a shitty clown costume — combined, this of course turns the boy into an unhinged killer as an adult. 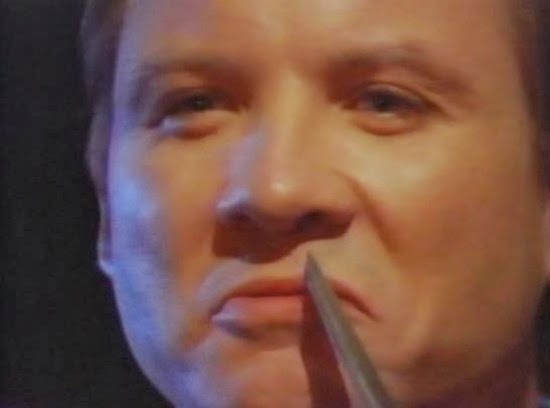 And we promptly see him action as the film jumps forward ten years: when a totally average American high-school couple tease him by — as all normal, American high-school couples are apt to do — screwing in the front seat of their car while gas-station-attendant, young adult Mark (now played by Addison Randall) fills the tank, and then even have the gall to give him the gal's panties as a tip, he blows up their car. Go, Mark, go! 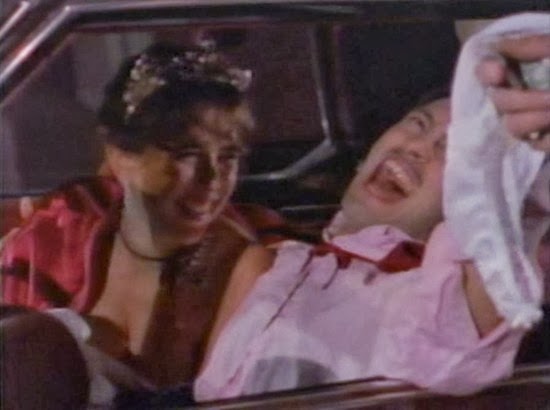 Unlike most slasher films of the era, the ten-years-later scene is not the beginning of the body count; no, first the film jumps forward another two years to a scene in which a bitchy gal who likes neither ice cream nor movies get terrorized — Mark being a firm believer of "No" means "Yes" — and then Hollow Gate finally jumps forward to the main section of the movie, in which Mark basically confronts what looks like a live-action version of the Scooby Doo gang without Scooby: You got Shaggy (Richard Dry as "Allen") and Thelma (Katrina Alexy as "Kim") and Fred (J.J. Miller as "Billy") and Daphne (Patricia Jacques as "Mandy"). 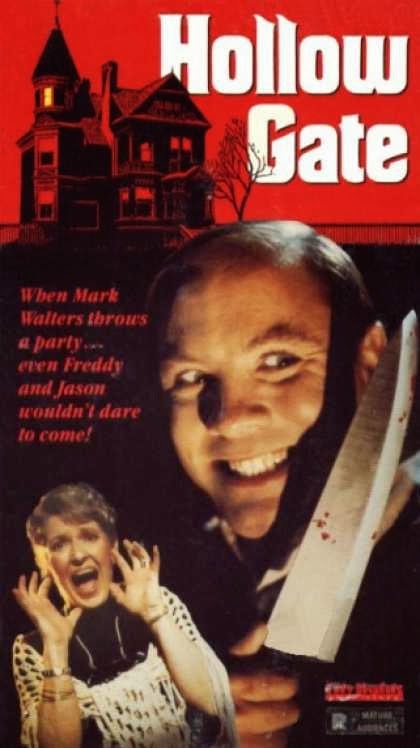 But unlike in an episode of Scooby Doo, where all's well that ends well, in Hollow Gate most of them die. (Here Hollow Gate most be given some points for originality: for the first time that we can ever remember, the fat chick is the Final Girl.) Not surprisingly, it would seem that not one of the four young non-thespians has since had a speaking part in another film, for they are one and all obvious flunkies from whatever acting school they might have ever attended. We are talking about four pieces of putrefied walking gorgonzola without a convincing facial expression between them. 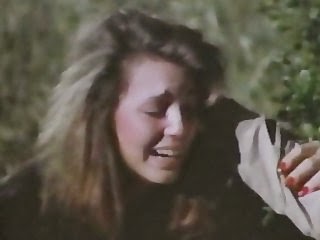 Be what it may, such a total lack of talent can be fun to watch, particularly when it is matched by a total lack of directorial talent — we're talking about some truly boring framing and shots and anything that might be regarded as relating to the visuals — and a script that was plotted by the mentally impaired. Add some gore as spice and you have a film that can be a lot of fun — if you're in the right state of mind. (Beer and drugs might help here.) 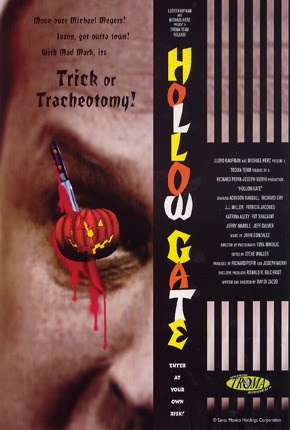 So what is the main set-up of the film? Well, four dislikable idiots on their way to a rave spend all their money on lunch and, to earn some wigs (seriously), deliver four costumes to Hollow Gate, where crazy Mark lives with his granny (Pat Shalsant). (By this point in the movie, "lived" is actually the proper tense.) Once there, he locks them onto the expansive grounds of the estate and, taking up a personality appropriate to the given costume he dons, hunts them down one by one — and they, of course, facilitate his endeavor by being totally stupid. Some of the murders are really entertaining, as the level of gore almost matches the blandness and slowness of the camerawork and action, which in turn is only surpassed by the previously mentioned incredible lack of any notable thespian talent on the part of the teen victims. 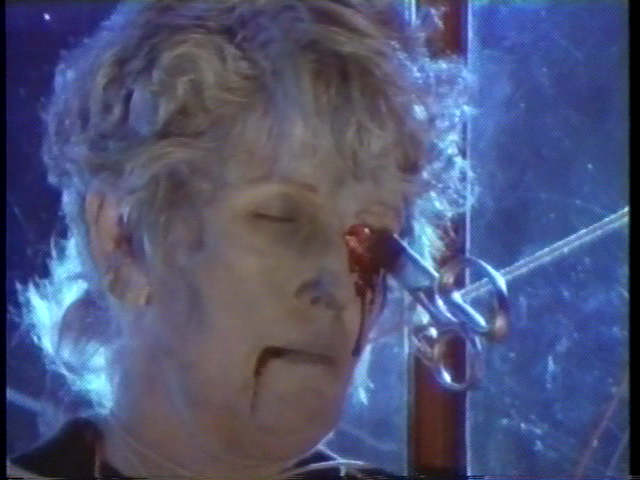 As previously mentioned, they are not very intelligent, thus they make so many "What-the-fuck-?" choices that never once does the film in any way manage to get the viewer to hope that they might survive. Personally, our favorite demise is that of Fred, who gets ripped to pieces (Not!) by two terrifying (Not!) Golden Retrievers that wag their tails happily as the lick him bloodily to death. A scene as breathtaking as it is stunningly inept... but equal in its cinematic affect as to when Mandy simply stands there for minutes on end until she finally gets shot and then mowed over by a super-slow threshing machine.
Killer Golden Retrievers:
As the adult Mark, the killer of the movie, Addison Randall, the grandson of Hal Roach, is sort of entertaining to watch despite being way too old for the part. The baby-faced actor, who began his limited career in Al Adamson films (namely Girls for Rent aka I Spit on Your Corpse [1974 / trailer] and The Naughty Stewardesses [1975 / trailer]), fares fairly well when he slips into the role of the given killer, at one point even doing a relatively fey John Wayne imitation. The most talented actors of the entire movie, however, are the two cops Bill (George Cole) and John (Robert Gallo of To the Limit [1995]) that finally show up to save the overweight Final Girl. Regrettably, they don't show just show up late to do the job but, instead, appear a couple of times throughout the movie for extensive scenes obviously meant to pad the running time in which they tell their respective life stories. Boring — but without them, Hollow Gate wouldn't have a feature-length running time. 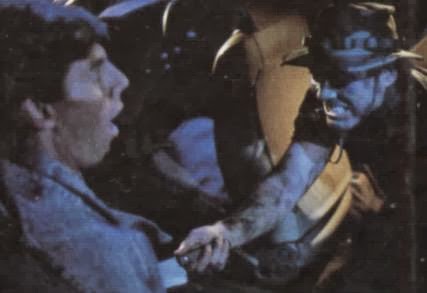 Hollow Gate: an asinine and totally unsuccessful body counter that, when viewed as a straight horror film, deserves its obscurity, but when viewed as a bad film, arguably deserves a wider rep. It is truly one unbelievably crappy film. 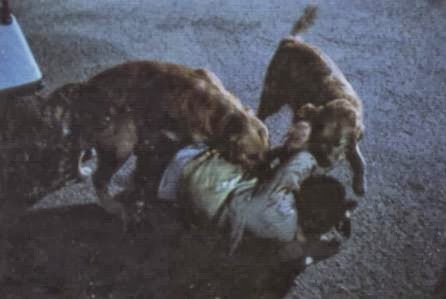