Actually, A Kitten for Hitler really isn't all that good, and the comedy in it is as puerile as the production is cheap, but it does appeal to the adolescent aspects of our humor here at A Wasted Life, so in honor of the passing away of the talented director Ken Russell and the holiday season coming up, the Short Film of the Month for the end of November is this almost 9-minute, shot-on-video short – made by Russell on a dare – originally hosted on the website Comedybox.tv.
In an interview in The Times (published 27 September 2007) Russell explained how the film came about: "Ten years ago [...], Melvyn Bragg and I had a heated discussion on the pros and cons of film censorship. Broadly speaking, Melvyn was against it, while I, much to his surprise, was absolutely for it. He then dared me to write a script that I thought should be banned. I accepted the challenge and a month or so later sent him a short subject entitled A Kitten for Hitler. 'Ken,' he said, 'if ever you make this film and it is shown, you will be lynched'."
If Melvyn Bragg actually truly believed that, it would seem that he was (perhaps still is) spectacularly unaware of such past filmic projects as Mel Brooks's 1968 film The Producers (trailer) with its superlative musical number Springtime for Hitler or, relatively more recently, the hilariously stupid British TV series 'Allo, 'Allo (Helga's striptease), 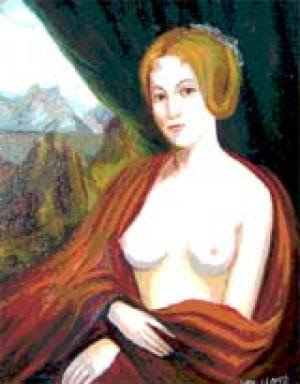 a farce/sitcom which aired from 1982 to 1992 (thus lasting longer than the war it was set in) – although, admittedly, Hitler never appeared in the latter. (The painting seen here right, by the way, entitled Fallen Madonna with Big Boobies, was the basis of a long-running gag on the show, which sadly was never broadcast in Germany.) Both Bragg and Russell must also have been unaware that Hitler – along with Eva Braun – did receive a sitcom of his own in England in 1990 on BSB (British Satellite Broadcasting); only one episode ever aired. Entitled Heil Honey, I'm Home, it was explained as a persiflage of the typical, classic US family sitcom format of the 1950s like The Honeymooners or I Love Lucy; the basic scenario had Adolf and Eva living happily together in the suburbia until their new Jewish neighbors, Arny and Rosa Goldenstein, move in next door. It is a weird, perverse mess of a program.
Above, with A Kitten for Hitler, Russell once again indulges his penchant for bad taste, scurrile images and juvenile humor – not to mention his odd obsession (considering that he had converted to Catholicism from Judaism around 1956) with Jews and Nazis. For a change, there does not seem to be a phallic symbol anywhere in the film – though it could be we just haven't noticed it (after all, a Russell film without a phallic symbol is like a peanut butter and jelly sandwich without peanut butter).
Enjoy A Kitten for Hitler – and if you like it, perhaps you should checkout the website Cats that look like Hitler.com.
Lastly, if you are interested in seeing just how surreally unfunny a sitcom about suburban Hitler and Braun is, embedded directly below is ten minutes of Heil Honey, I'm Home. More can be found on YouTube.com.
The first ten minutes of Heil Honey, I'm Home:
.
Posted by Abraham at 10:45:00 AM