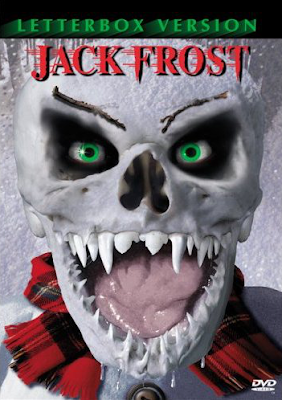 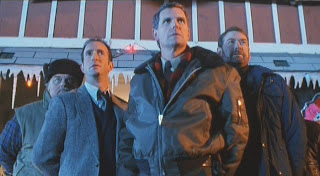 It's been awhile, but finally another intentionally bad film that actually works as a good bad film. Unlike, say, such recent displeasures like Frostbiter (1995), which almost works at times, or Timesweep (1987), which doesn't work at all ever, ever, ever, Jack Frost has the proper amount of self-awareness, cheekiness and vision to actually work. Thus, the direct-to-video film, with all its low budget and "flaws" – the bad acting, the cheap sets, the funky special effects, the ridiculous story – as visible as a neon sign is a true barrel of stupid fun. 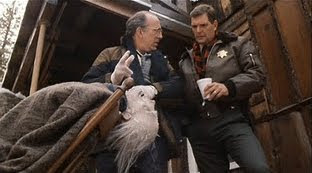 Let it be clear: Jack Frost is crap, but damn if it ain't platinum-plated crap – just like we like it here at A Wasted Life. And obviously enough other people have liked it as well: three years after its release, Jack Frost was followed by a sequel, Jack Frost 2: Revenge of the Mutant Killer Snowman (2000 / trailer)... which, needless to say, we definitely plan to see one day.
Jack Frost is the directorial debut of Michael Cooney, who prior to this deliciously fragrant visual fart had written a few thrillers – namely Tracks of a Killer (1996) and Murder in Mind (1997 / trailer) – and then went on to script one of James Mangold's best films, the highly enthralling and well-made horror thriller Identity (2003 / trailer). 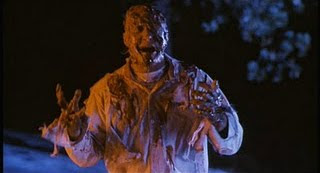 For Jack Frost, however, he obviously wasn't going for creativity or intelligence as much as he was going for fun, and fun he achieves. And while one might argue that the concept of a killer snowman is relatively original, and thus creative, the method in which it is created is not: if you have seen Mosquitoman (2005 / trailer) or Sharkman (2005 / trailer) or even Shocker (1989 / trailer), then you know the score – something happens that turns someone into an unstoppable something. 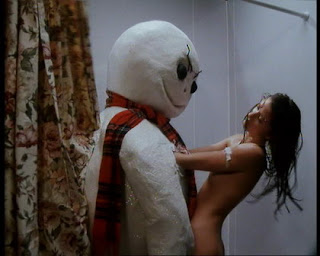 In the case of Jack Frost, a few days before Christmas a homicidal maniac (see Mosquitoman & Shocker) named Jack Frost (Scott MacDonald) is being transported to his execution when the transport wagon collides with a truck full of an experimental liquid from the local genetic research labs. The liquid turns the killer into Jack Frost, a homicidal snowman. Obsessed with getting revenge on the man that originally caught him, Sheriff Sam (Christopher Allport*), who just happens to live close to the accident site, Jack Frost shows up in the town of Snowmonton and begins to play ten little Indians with the unsuspecting town inhabitants....
Featuring the acting debut of Shannon "Love Pillows" Elizabeth in minor part of a horny teenage that literally gets fucked to death by a snowman – carrots are good for more than just being a nose – Jack Frost lacks anything that night resemble logic or believability, but overflows with devil-may-care mirth. (Oh, wait, you question how I could use the word "believability" when talking about a killer snowman movie? 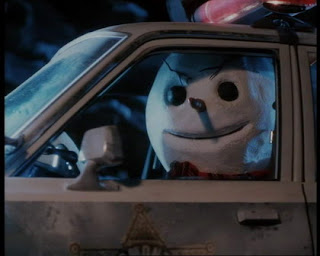 Well, the word refers less to the concept of the killer snowman – as a film, it is a given that a certain level of fantasy must be accepted as "real" – than to, for example, a sister that is not only hot to fuck her boyfriend a mere few hours after her brother loses his head, but also breaks into the sheriff's house with her squeeze to do so; a son who makes oatmeal for the father he loves using antifreeze; a snowman – as in: without legs – that can drive; etc. etc.)
Like Freddy and Chucky, Jack Frost can't seem to do anything without spouting totally lame one-liners, but they are so stupid that they compliment the film as a whole. The deaths are not very bloody – body-count lite, so to say – 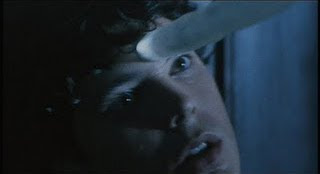 but plentiful, and for the most part good for a hearty laugh. One or two demises even overcome their obvious low-tech execution to become surprisingly icky – the puking scene of Stone (Robe LaBelle of New Nightmare [1994 / trailer] and Fido [2006 / trailer]) is the most memorable in this regard. More amazingly, the movie even manages to achieve a certain level of tension at times, though it usually dissipates quickly due to the giggles or laughter that always follows soon thereafter. 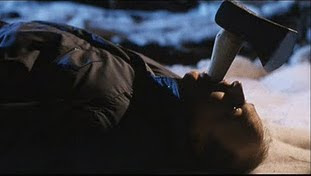 *In a bizarre and deadly case of irony, Christopher Allport was literally killed by snow in January, 2008: He was on a skiing trip at the Mountain High Resort in at the San Gabriel Mountains when he and two others (Michael McKay and Darin Bodie Coffey) were killed in a series of avalanches.
Posted by Abraham at 10:21:00 AM