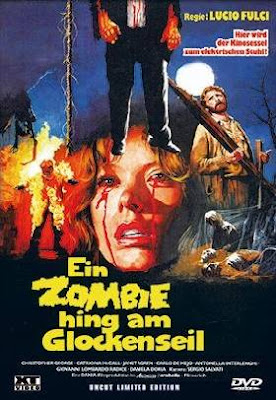 "The city of the dead. The living dead. A cursed city where the gates of hell have been opened."
Mary Woodhouse (Catriona MacColl) 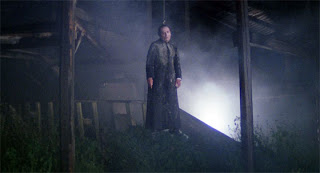 (Massive spoilers.) More like Small Town of the Living Dead, but that is the smallest quibble with the film, the first "installment" of Lucio Fulci's unofficial Gates of Hell trilogy – followed by the great The Beyond (1981 / trailer) and the entertaining The House by the Cemetery (1981 / trailer) – and arguably the least satisfying of the three.
Could it be that Fulci was actually sitting on three different films, all featuring the same stars and the same wardrobe so as to save money, 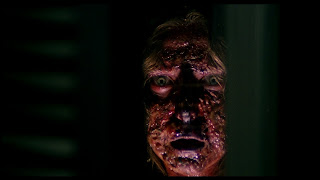 all started at different stages of the given plot, and then all desperately edited together when the productions fell through so as to create the semblance of a complete film? Or could it simply be that the concept of a coherent plot and the semblance of any logical, consecutive narrative structure interested Fulci far less than the visual effect of the various memorable shock scenes and, occasionally, the establishment of a surreally disorienting sense of absurdly non-sequitur horror? 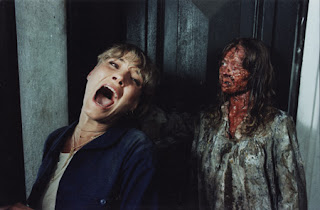 Needless to say, any fan of Fulci – or Italian horror films of the Golden Age of Grindhouse in general – knows that the latter is the fact of the matter. But, likewise, the common fan of such Italo-trash is also more than willing to overlook the broad lack of coherent logic or narrative and/or directorial acumen innate to the genre far beyond the limit that would drive them to mercilessly rip apart an exploitation, trash or horror film by a US director. And City of the Living Dead is no different: one of the many popular horror films of the Italian "Godfather of Gore", with the exception of its special effects – re: gore – and cinematography, it is a dud in all things that generally make up a professional production.

"Will you check her out? Talk about a 'box lunch'."
Blonde gravedigger (Perry Pirkanen) 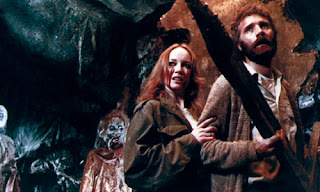 Not that this has ever hampered the film's popularity and wide-spread acclaim: it is, in all intents and purposes, an accepted and indisputable classic of the Golden Age of Grindhouse. A position it holds, possibly, due to the fact that despite its lack of the commonly accepted denominators of professional filmmaking, City of the Living Dead nevertheless achieves a sort of surreal rhythm that, peppered with the shock sequences, not only makes the numerous flaws of the movie easy to overlook but also makes the movie oddly fascinating if not extremely compelling. (Unlike the other two films of the Gates of Hell trilogy, however, City of the Living Dead is never really all that scary – although, as is common to most of Fulci's film, it does often make you squirm.)

The film opens with a levitating priest, Father William Thomas (Fabrizio Jovine of Fulci's The Psychic [1977 / trailer]), who kills himself by hanging in the graveyard of Dunwich, a small town built upon the ruins of Salem, MA.* (OK, so we never see the priest levitate, but how else does he manage so easily and effortlessly to hang himself so high? There is no ladder or chair or anything below him upon which he could have reached the noose, much less tie it in the tree.) 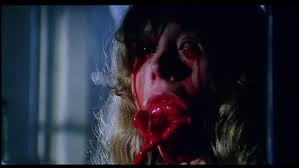 Meanwhile, at a séance in NYC, the psychic Mary Woodhouse (Catriona MacColl of Hawk the Slayer [1981 / trailer] and both other entries of the Gates of Hell trilogy) has a visions revealing that his death has opened the portals to hell – and promptly dies. This leads to a prolonged scene with a NYC detective and the other participants of the séance in which the conversation continually returns to "The Book of Enoch", which, as the rather unnecessary character Theresa explains, "[....] Provides the explanation in every detail of a crime, before it has been committed." Swell – only the book has nothing to do with the rest of the film and is never mentioned again.

"Mr. Bell, if those gates are left open, it could mean the end of humanity. We've got to get them shut again. At midnight on Monday, we go into All Saints' Day. The night of the dead begins. If the portholes of hell aren't shut before, no dead body will ever rest in peace. The dead will rise up all over the world and take over the Earth! You must get to Dunwich, Mr. Bell. You must reclose those gates!"
Theresa (Adelaide Aste) 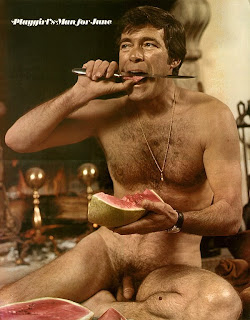 At Mary's funeral the next day, to which only the reporter Peter Bell (Christopher George of Mortuary [1983 / trailer], Graduation Day [1981 / trailer], Pieces [1982 / trailer], The Exterminator [1980 / trailer] and Grizzly [1976 / trailer], seen here eating watermelon as the centerfold in Playgirl's June 1974 issue) shows up, she revives in the coffin and he frees her.** Soon they are on their way to Dunwich to close the gate before All Saints' Day, for otherwise all hell will be on earth.
In Dunwich, where not only do blow-up sex dolls inflate themselves by themselves, but girls puke their guts out and teleporting zombies are ripping the brains out of the hapless townsfolk, they hook up with the shrink Gerry (Carlo De Mejo, also seen in The Dead Are Alive [1972 / trailer], Contamination [1980 / trailer] and Guardian of Hell [1981 / trailer]) and his neurotic but sexy blonde patient Sandra (Janet Agren of Ratman [1988 / trailer], Hands of Steel [1986 / trailer], Mystère (1983 / trailer], Eaten Alive! [1980 / trailer] and L'assassino ha riservato nove poltrone [1974 / trailer]

– seen here not as she appears in the film) and the little boy John-John Robbins (Luca Venantini of Exterminators of the Year 3000 [1983 / trailer]) to dawdle and delay until Emily and many others are dead.

"Don't tell me. You're a newspaper reporter. I can smell you guys a mile away."
Policeman (Robert E. Warner)
Finally, after it is theoretically too late because All Saints' Day has dawned, they enter the crypt of Father Thomas to destroy him – as powerful as the teleporting dead are, they can be killed by simply stabbing them in the stomach with the nearest sharp object. But wait! Just when you think everything is ending well and John-John is skipping happily to the survivors exiting the crypt, Mary grimaces in horror, freeze frame, scary noises, cheap scraggly lines on the image and the film ends on a note of unknown dread... 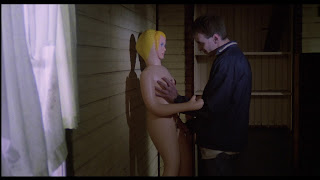 The City of the Living Dead is a fun film, but not necessarily a good one – it is very much an obvious stepping stone to the two Gates of Hell films that followed, both of which are far more moody, surreal and successfully nightmarish than this. City has some long dry spots and the whole NYC part seems extraneous (it would seem to make more dramaturgical sense to have simply scripted everything into one location), but the flaws of the film only add to the film's overall goofy appeal. 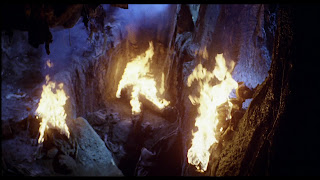 In turn, the goofiness of the film is easily balanced by some true highlights of grindhouse gore, in-particular: the infamous gut-puking scene and the later equally infamous head-drilling scene in which a minor character named Mr. Ross (Venantino Venantini of Bandidos [1967 / trailer] and Seven Dead in the Cat's Eye [1973 / trailer]) kills the town's simpleton Bob (Giovanni Lombardo Radice of dozens of films, including Stage Fright: Aquarius [1987 / trailer] and The Church [1989 / trailer]), who initially appears to be a much more important of a character than he turns out to be. (His death may stand out as a highlight of the film, but it also stands out as typically extraneous to the overall plot of the film – not that something like that has ever stopped any Italo-trash master from inserting a possibly memorable scene when if given the chance.) Add bad dubbing – including the screeching of jungle animals in a New England forest – wild zooms and crazy pans, oft-inspired (and oft-idiotic) editing and a meandering, logicless script, and you have some prime Eurotrash grime. 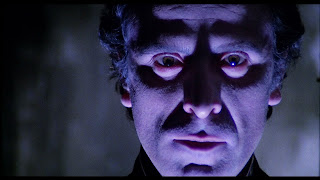 The City of the Living Dead – a flawed but memorable classic of Italo trash from the Golden Days of 42nd Street. Well worth seeing, perhaps even required viewing if you are into Eurotrash, but not the masterpiece so many claim it to be. It is more like, dunno, Van Gogh's Siesta to his Irises or Bedroom in Arles or Starry Night or Night Café: good it is, with all the common stylistic features of the artist that you know and love, but simply not fully up to par with the best of the work. But in the end, it doesn't matter, because it is still a joy (of sorts) to see...

*One assumes that Fulci, a foreigner, simply did not know that Salem, MA, is not only still standing but is also a popular tourist town. But, perhaps, more likely, he simply didn't give a rat's ass.

** How did she survive the embalming? The autopsy? Why do none of her friends show up? Do funerals happen that fast when the death is considered suspicious? 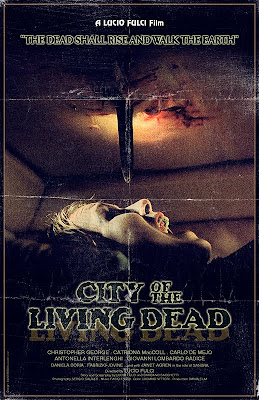