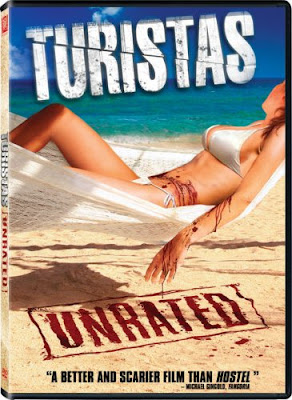 Don't take this personal, okay? If it makes you feel any better, please know that I'm doing this for a good cause.
Zamora (Miguel Lunardi)

Actor/director John Stockwell has been quoted as having said that "[Screenwriting is] a lonely, miserable profession—but the pay can be okay and you get to spend a lot of time in Hawaii." Well, directing is not a lonely profession—what, with the cast and crew and all the rest—but the pay is probably OK and, if you’re lucky, you might just get to spend your time making your film in someplace like Brazil. And that is surely the only reason that this film, yet another mindless example of US-fueled xenophobia caught on film, was made: Stockwell and others involved wanted an excuse to get paid while catching a tan and drinking pina coladas. Whether the film they made was good or not was definitely a secondary consideration…

Turistas rehashes the basic plotline used by Eli Roth the year earlier for the far more offensive Hostel (2005): in short, privileged airheads are no longer safe in foreign countries. This time around, however, it isn’t vegetarian Dutch men who eat with their fingers that the never-to-be college students have to worry about, but rather South American doctors supposedly sick of their lands being drained by the richer occidental lands of leaches.

Run right now. This guy has plans for you and your friends and his plans are pretty fucking elaborate and pretty fucking fucked. So if I were you, I'd just run.
Nurse (Julia Dykstra)

Unlike in Hostel, where the three main characters are unlikable dickheads, the endangered westerners of Turistas are a mostly likable pack. Handsome, level-headed Alex (Josh Duhamel) is accompanying his hot sister Bea (Olivia Wilde) and her hot, happy-go-lucky girlfriend Amy (Beau Garrett of Unearthed [2007 / trailer]) through Brazil when they barely survive a well-filmed bus wreck (undoubtedly the carcass of that bus is still rusting away today deep down in the gorge of some beautiful coastal ridge of Brazil). Joining up with a babe named Pru (Melissa George of 30 Days of Night [2007 / trailer]) and a couple of fun loving lads named Liam (Max Brown) and Finn (Desmond Askew, who played one of the cannibalistic mutants in The Hills Have Eyes [2006 / trailer]), the group stumbles upon a dream beach with a tropical bar full of friendly Brazilian fuckables. But paradise turns into paradise lost when they awaken from a drugged sleep the next morning to find all their money and belongings gone. Their reception at the nearby village is less than friendly, and act of stupidity on the part of Liam wins them no additional popularity. Saved through the intervention of the seemingly friendly local dude Kiko (Agles Steib), they follow him deeper and deeper into the jungle to the supposed safety of his uncle named Zamora (Miguel Lunardi)...

The message of Turistas, if there is one, is less "American go home" than "American don’t leave your homeland"—the basic lesson of so many an urban legend dealing with people’s experiences abroad. Indeed, although the “nasty others” concept is lifted from Hostel, the nasty intentions of the nasty others in Turistas are a simple riff of an old timer amongst urban legends: organ harvesting. But unlike in the urban legend, in which the victim awakens later in the hotel without a kidney, in Turistas the victim no longer awakens anywhere...

The whole history of our country is taking you from us and our land – rubber, sugar, gold. And from our bodies – for slaves, for sex. And now, for – for our insides.
Zamora (Miguel Lunardi)

(Spoilers.) Turistas is well shot, the scenery fabulous, the main characters good looking and (due to the inordinate amount of time given to character development for a film as slim as this one) relatively likable. Still, they are all dimwitted idiots, and particularly the long scenes in which they follow Kiko like well-trained dogs (despite the fact that they first met him at beach-side bar where their troubles started) leave the viewer cringing in exasperation at their brainlessness. The horror in the film kicks in too late and is too little, and the film seldom reaches any level of tension or suspense, but at least the intermittent but effective moments of blood and violence are not as pointlessly or nihilistically sadistic as in Hostel or the endless Saw series. Again, as in so many of these cheesy films, a gun in the hand is about as useful as a water balloon because no one can hit the side of a house.

The resolution is particularly unbelievable in many ways: the long underwater cave scenes in which no one drowns, the sister that stops her bro from the final act despite having herself killed to survive, the continual crossing of paths of the hunted and hunters in the final chase, the change of attitude bad guy's minion, the bad guy’s obvious supercilious distaste of the native races despite his supposed altruistic reasons for his actions, etc., etc.
In short: Turistas is perhaps good to look at but it is not very good, lacking either tension or true scares, and it functions better as a tax write off and excuse for a film team to take a vacation in Brazil than it does as a real film.
Posted by Abraham at 6:43:00 PM