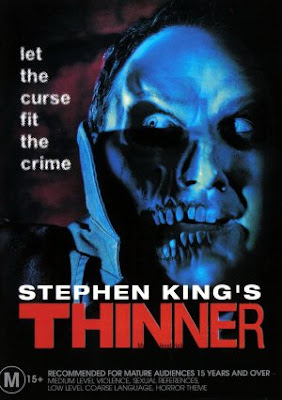 Tom Holland proved his stuff in the late 1970s by providing scripts for such fun stuff as television’s The Initiation of Sarah (one of four writers needed to flesh out a really cheesy Carrie [1976 / trailer] variation, featuring Morgan Fairchild, Shelley Winters, Robert Hays and Tisa Farrow!), Class of 1984 (trailer), Mark Lester’s 1982 remake of Blackboard Jungle (1955 / trailer), and Richard Franklin’s entertaining body-counter Psycho II (1983 / trailer). In 1985 he was finally given the chance to direct one of his own scripts, and the result was the mildly entertaining teenage vampire thriller Fright Night (trailer).

While Fright Night is good, Holland actually only secured his place in the history of modern horror films two years later with the third film he directed, also from his own script. No matter how low he might ever go, no matter how many bad or mediocre films he might one day make, Holland has the honor of having co-created, in Child’s Play (1988 / trailer), one of the horror icons of that decade, everyone’s favorite bloodthirsty and erudite doll, Chucky.
Regrettably, he seems to have shot his load with that film. For since then his projects have been passable at best, and have even sunk as low as the idiotic television adaptation of Stephen King’s The Langoliers (1995 / trailer), a dramatization of the trials and tribulations of Mr. & Mrs. Packman with rabies. Why Holland would choose to return to Stephan King—or, in this case, “Richard Bachman”—as a source for another film the year later is a mystery only he can answer.

King, this century’s Herman Melville when it comes to the number of pages his turgid novels usually have, has been trying to write The Great American Horror Novel for years. As a result, he has cranked out more second-rate crap than the whole rest of Maine has yet to shit, little of which has translated very well onto the film. True, there were excellent film adaptations of Misery (1990 / trailer), Dolores Claiborne (1995 / trailer), Carrie (1976) and Dead Zone (1983 / trailer), but the passable adaptations are easily outnumbered by the likes of Pet Sematary (1989 / trailer), Christine (1987 / trailer), Maximum Overdrive (1986 / trailer) and the numerous unbearable television mini-series that regularly flicker across the small screen. At this point in time, King, undoubtedly the most filmed author ever, spits out so much verbiage so quickly that one has little time or interest to read the book before the film comes out. Thus, any comparisons between King’s novel and Holland’s film are rather pointless. The question can only be, is Thinner the movie any good?

Well, it isn’t exactly bad. True, the story is full of holes, none of the characters are likable and the motivation of virtually everyone is questionable at best (if not completely inconsistent), but Thinner does feature some good special effects and make-up, not to mention an oddly pervasive oppressiveness as well as one skin crawlingly sick kissing scene. Besides, any film that features a half-way decent performance from Robert Burke can’t be that bad. Burke might be excellent for such entertaining arthouse fodder like The Unbelievable Truth (1990) or Simple Men (1992 / trailer), or even for such artsy fartsy horror excursions like Dust Devil (1992 / trailer), but there is a reason that he is primarily a bit-part actor or star of such crap as Robocop III (1993 / trailer): he can’t really act. In Thinner, however, he obviously tried to—and the results are okay.

Burke actually holds his own against Joe Mantegna, an Italian character actor whom time has proven to be much better than his inauspicious start in Xanadu (1980 / trailer) ever indicated (the scenes were all cut). In Thinner, Mantegna plays Richie Ginelli, a machinegun toting Mafioso that fat slob of a lawyer Billy Halleck (Robert Burke) gets off of some charge at the film's beginning. Soon after we are introduced to the band of gypsies parked across from Town Hall in the little Maine town, including Tadzu Lempke (regular television character actor Michael Constantine) and his hot-stuff daughter Gina (Kari Wuhrer, the silicon upholstered hot thing best remembered as either Abigail on TV’s Swamp Thing or for dying by getting too close to Jon Voight’s crotch in Anaconda [1987 / trailer].) They get driven out of town, but later on, while driving home from some restaurant and getting a blowjob from his wife Heidi (Lucinda Jenney), Billy accidentally runs over and kills Tadzu’s oldest daughter. At the trial, of course, Billy gets off much too lightly, so Tadzu places a gypsy curse on him. Low and behold, the fat slob begins to lose weight—and no matter how much he eats, can’t stop doing so. Soon he finds out that the cop and judge that helped him get off so lightly were likewise cursed and are also both suffering terribly—one getting advanced acromegaly, the other advanced dandruff. And to boot, is his wife screwing around with the local doc or not? A mere wisp of a man searching for the gypsies and hiding from the cops (that wife and doc, convinced that he is bonkers—or maybe to make sure he doesn’t get the curse undone—have sicced on him), in desperation he turns to Ginelli for help. Ginelli might believe in curses, but that doesn’t stop him from helping....

The character Ginelli seems more narratively convenient than realistic, but he serves his function, and is probably the most charismatic person in the film. Billy’s constant pleading for Ginelli to not to spill more blood rings hollow considering both his prior actions and what he does once the curse is “lifted.” The anger of the gypsies might be justified, but never do they act in such a way to gain any sympathy from the viewer. All that aside, while the level of tension is never that high because of the general predictability of the events, the acting and makeup are top notch, and there are moments of truly great, dry humor. And again, if the big kissing scene doesn’t turn your stomach, then nothing will.
Oh yes, lest we forget: Stephan King also does his mandatory three-minute appearance in some incidental part.
Posted by Abraham at 6:40:00 PM

You didn't exactly get all the movie facts while you were very rudely reviewing this underrated king gem, predictable or not

One can only wonder what would touch Stephen King, as a former English teacher, more: your defense of him, or your inability, within one single sentence, to follow the rules of capitalization or punctuation. And could it be that you left out a word or two? For future reference, take to heart: "Stephen King is a king of grammatically correct verbosity." We cannot help but also say that you do not particularly detail what you found so indefensible. When we look at the date of the review – it was written 11 years ago – and what is written in it, we would say the review is pretty much on the mark in every way. On the other hand, were the review a recent one, some aspects would be questionable. That is due to something known as the passage of time: it can make something that was once true less true or untrue because new things occur in the meantime. And as we have become somewhat less combative with age and are scarred by four years of Trump, we would probably include less dissing. (Let's leave that to the Republicans, okay?) In any event, over the years we have also since come to the conclusion that King is a master of the written English language and (going by his tweets and public statements) a man of intelligence, honor and integrity. And his commitment to the American culture of letters and cinema is commendable. That said, going by the four books of his we have read since 2009 – and the odd baker's dozen we read prior to 2009 – he can still start his stories better than he can resolve them. "Cell" and "Rose Madder" both grab you by the balls but peter out limply, while "The Colorado Kid" begins with one of the best structured, German-language-length, English-language sentences we've ever read but quickly turns into a sleeping pill. "On Writing", on the other, hand: excellent. As for the feature films based on King's work, well, as many recent adaptations have shown, they are getting better — but his name in the credits is not an indication of cinematic quality.