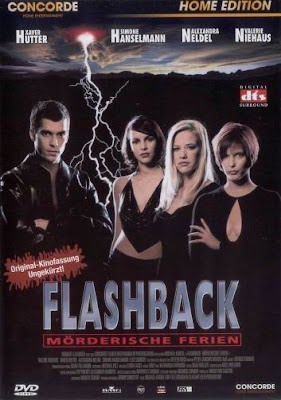 It all started with that overrated but enjoyable piece of fluff entitled Scream (1996).
Well, actually, it all started years ago during the golden age of slashers, but it took the financial success of Scream (trailer) to bring the genre back. In the U.S., Wes Craven's film was followed by a whole slew of imitations, most of which were more and more like substandard but flashier versions of the original product of yesteryear than the ironic, self-referential movie that made Neve Campbell a brief shooting star.
Elsewhere in the world, the foreign movie industries also noticed that there was once again money to be made in body-counting. Nonetheless, it took the German film industry four years to jump on the bandwagon, but then it promptly spit out two full theatrical releases.

The first was Anatomie (2000/trailer), a Franke Potente vehicle which actually tried to be a little up-market, or at least tried to look good. Hot on the heels of that film came Michael Karen's Flashback – Mörderische Ferien, which didn't bother to try for anything other than to cater to the cheapest product demands. Written, directed and staring mostly television no-names from such lousy daytime soaps as Verboten Liebe ("Forbidden Love"), Klinik unter Palmen ("Clinic Under Palm Trees") and Gute Zeiten Schlechte Zeiten ("Good Times Bad Times)", Flashback is a simple, unpretentious body count film which often — unintentionally — seems like a satire but mostly just bides its time between one bloody death and the next. True, there is one big unexpected and wonderfully inane twist in the middle of the film when everyone is revealed to be egoistical conniving assholes and the real murderer is revealed, but up until that point little happens in the movie that isn't predictable or hasn't already happened in some other film. In truth, other than that we-are-all-assholes twist, the only thing original about Flashback is its location, the blood all flowing amongst the impressive beauty of the Bavarian Alps. But even if the film is not all that innovative or good, at least it does have blood, blood, blood...

Supposedly the original story to Flashback comes from the pen of Jimmy Sanger, who any true fan of horror remembers as the scribe of such classics as The Curse of Frankenstein (1957/trailer), Dracula (1958/trailer), Maniac (1963), The Nanny (1965/trailer), Who Slew Auntie Roo (1971) and dozens of other genre films, usually of better quality. (True, he also worked on crap like The Brides of Dracula (1960/trailer), but then, everybody has a bad hair day.) It is easy to imagine the story Sanger probably supplied (as he desperately tried to fix his hair): "Uh, like, some young woman goes somewhere where there are no parents and like, uh, young people start dying." Not exactly Gone With The Wind or Les Miserables — or a Bee-Line publication for that matter — but more than enough for the actual scriptwriter, some unknown named Natalie Scharf, to regurgitate the semblance of a beginning, middle and end.

Unlike most slashers, Flashback opens with not one but rather two introductory scenes. The first, which occurs on a train, is used to introduce a sickle-wielding nutcase in a flowered housedress and is filmed so incompetently that one first expects the whole thing to be a film within a film, and that when the real film starts it will be revealed that the characters are simply watching some lame horror film. But no, it soon becomes obvious that one is really simply watching a lame horror flick. After the introduction of the third-rate Norman Bates, another scene is used to introduce the character of Jeanette Fielmann as a child (Nicola Etzelstorfer), who gets to find her daddy murdered, watch her mother have her throat sliced by the sickle-wielding cross-dresser, trip over her slit-in-two doggy and somehow survive the dark and stormy night. (Scriptwriter Natalie Scharf does manage to work in a classic urban legend into this scene which is effectively unnerving.) Then the adult Jeanette Fielmann (a surprisingly likable Valerie Niehaus) snaps awake on the couch of her shrink, Dr. Martin (Erich Schleyer). It is ten years later, and we learn that the seemingly normal Jeanette, who is unable to remember how she got away that night, has spent the last ten years being raised by Dr. Martin in a nut house. No, he is not some mad scientist, but rather a kindly, sympathetic father-figure who thinks it is time that Jeanette returns to the real world, so he arranges that she should go to the Alps for the summer to act as a French tutor for the Schroeders, a group of three rich and spoiled teenagers whose parents are off on a trip somewhere. No sooner does she get there than does someone steal her flowered housedress, a sickle disappears and mysterious lights start appearing in the old coach house across the way. Elke Sommer (born Elke Schletz in Berlin in 1940), looking much worse for wear than she did back in Blood Baron (1972/trailer) and Lisa & the Devil (1973/trailer), is on hand as a possible suspect, playing the bitter, limping and sinister housekeeper Frau Lust. (At the latest, she proves her innocence when she takes her last ride on the ski lift, dropping body parts along the way.) In no time flat, Jeanette is unsure whether or not she is having flashbacks or if there really is someone running around wearing a housedress and wielding a sickle, but between all her nervousness and her tutoring she still finds the time to start messing the bed-feathers with Leon Schroeder (Xaver Hutter). A hot-looking bitch in a wig named Ella (Katja Woywood) dies soon after her dog does, and some asshole in a Volkswagen becomes the running joke of the film once he gets a sickle through his head. Soon after, the film's big twist is revealed — so unexpectedly, in fact, that it is indeed effectively surprising — and from that moment on the bodies pile quicker than women have orgasms in porno films. (Likewise, the individual characters — by their idiotic actions, anyway — seem just as willing to die as the average woman in a porno flick is willing to fuck. True, they do all try to run away, but isn't that much the same as a woman saying "No" when she actually means "Yes"?) The final scene of the movie, of course, reveals that in all likelihood the entire process will repeat itself somewhere someday.

In all truth, had the dialogue not been so universally atrocious and had the direction been a bit more competent, Flashback might have been a rather good film. As it is, it veers back and forth between effectiveness and total idiocy and, as a result, becomes a jumbled mess whose only redeeming features are the blood, blood, blood and great landscape. In the last scene, the German director and actor Detlev Buck makes a brief guest appearance as the psychologist of the film's sole survivor. Aside from making one wonder what the hell he is doing in a project like this one, it also causes one to wonder about how much better Flashback could have been had someone with his talent done the direction. Undoubtedly, had Flashback been made by someone with a decent sense of comedy, the movie could have been a lot more fun than Scream ever was.
Still, in comparison to the next German produced slasher Swimming Pool (trailer), which came out in 2001 and was filmed in Prague, Flashback is a masterpiece of intelligent filmmaking.
Posted by Abraham at 4:49:00 PM