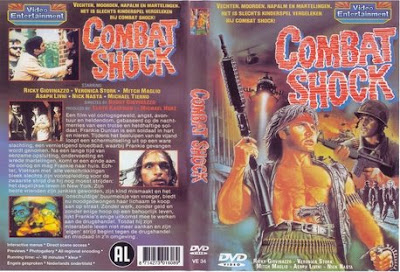 (Trailer) After Buddy Giovinazzo made American Nightmare with the lowly budget of $40,000, he eventually sold it the legendary purveyors of contemporary crap Troma Films, who promptly re-edited parts of his film, cut in a bunch of rice patty fields and gave it the new title Combat Shock. Adding a Rambo inspired cover that has nothing to do with the actual film, Troma released the film into the lost world of cheap videos, where, against all odds, it didn't simply disappear. Over the years, Combat Shock has gained a rather vocal cult following, constantly referred to as some sort of skid-row hybrid of Eraserhead (1976/trailer) and Taxi Driver (1976). 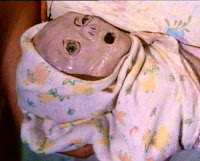 While there are indeed aspects of this grimy, low budget and rancidly depressing strip of celluloid that seem to refer to the aforementioned films, Combat Shock is individual enough to be seen as something more than simply a "hybrid" of other, equally individual films. The famed baby, according to the filmmaker himself, was not part of the original script, in which the baby was meant to be heard off camera but never seen. The grotesque mini-E.T. was added to the film due to the desire of the special effects man, who claimed he could deliver a mutant on a budget of $60 and actually did so. 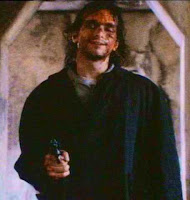 In March of 2001 in Berlin, Germany, Giovinazzo screened his own personal copy of the original edit of American Nightmare following a midnight reading of outtakes of his written works at the Xenon movie theater, a tiny movie house known for its interesting (but primarily of Gay interest) film scheduling. The rice paddies weren't missed, but the length, lethargic pacing, depressing tone and unadulterated ugliness of the film itself did manage to make half of the audience leave before the film's legendary finish. Simply said, American Nightmare is not everybody's taste. Still, for all its ugliness and pain, for all its first time filmmaker flaws (for which Giovinazzo seemed compelled to repeatedly apologize), the film still packs one mean sucker punch. Too slow to be an action film, not enough T&A to be exploitation, not enough war to be a war flick and not enough horror to be a horror movie, American Nightmare is a dirty, direct and aggressive slice of life gone to hell, it's obvious cheapness serving only to underscore the lost, pointless and painfully futureless lives of everyone involved. In all likelihood, no one in this movie would sing along with a Bruce Springsteen paean to the American way of life, for they live the American Nightmare. Troma wasn't all that wrong when they gave the video box the tagline: "Fighting, killing, maiming. Agent Orange and the torture cages were the easy part." 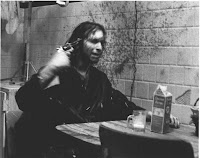 Buddy's brother Rick Giovinazzo does a surprisingly effective and convincing job as Frankie Dunlan, an unemployed, shell-shocked loser living in a wreck of a dumpy apartment located next to some subway tracks somewhere in the slummy backwaters of Staten Island. Saddled with a mutant baby that never stops crying and an ugly, nagging slob of a wife (Veronica Stork, who seems less to be acting than just being herself), Frankie suffers continual flashbacks to his Vietnam experiences as a P.O.W. and has a social circle consisting only of junkies and cheap, abusive and ridiculously dressed gangsters. On the eve of being evicted from his hellhole of a home, after another unproductive visit to the employment office — watch for director Giovinazzo as the guy with the ugly beard who briefly pops his head in asking about his Vegamatic — and an unproductive call to his estranged, sickly father who wants nothing to do with his "dead" son, Frankie finally loses it completely when the thugs he owes money to beat him up once too often. As to be expected, a bloodbath follows, the last scene being an excessive orgy of blood and unbridled tastelessness. 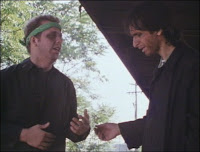 American Nightmare is one bent film, wallowing in its own filth and ugliness as it mirrors the deeper aspects of a futureless, scuzzland, USA. Uncompromising in every aspect, it is surprisingly well made considering its budget, though its ragged sleeves can be seen in the "Vietnam" scenes and most of the acting of its secondary characters. Often oddly funny, one ends up laughing and feeling disgusted at the same time. The film has a slow, almost monotonous pacing and camera work which, whether intentional or not, serves well to underscore Frankie's squalor and futureless situation. The music, supplied by the film's star, is unbelievably bad in a way only a low budget, 1980’s synth score can be. Less music than an unnerving dirge with an occasional rhythmic embellishment, it annoys and alienates, thus being oddly compatible to the whole distasteful cinematic experience.

Methinks Giovinazzo doeth excuse too much: American Nightmare might be an ugly, perverse film, but for a first film it is an exceptionally strong piece of work, far more interesting and honest than many a more celebrated debut (not to mention most follow-ups). It's a fat, stiff ten-inch dick shoved up the viewer's butt made in a land known for thin, limp one-inchers that never penetrate. Giovinazzo should be proud. Still, one has to wonder how a filmmaker goes from a movie like this to scripting She's Back (1989), aka Dead & Married, a seldom-screened black comedy starring Carrie Fisher.
Posted by Abraham at 12:52:00 PM

"In all likelihood, no one in this movie would sing along with a Bruce Springsteen paean to the American way of life."

If you're talking about "Born in the USA," you're way off. that song is about the plight of Vietnam veterans. Other than that, good review.

"The music, supplied by the film's star, is unbelievably bad in a way only a low budget, 1980’s synth score can be."

It was actually his brother Ricky that supplied the music. He's gone on to have quite the career:

Hi Jesse,
Thanks for your feedback. It’s always nice to find out that people not only actually read this Blog, but pay attention while doing so.
You’re right about the music being supplied by Buddy’s brother. Dunno where I got my “facts” way back when I wrote the review way in 2001, but IMDB says you’re right. Nice to know that “Ricky G” has gotten better with age and experience, 'cause what he did for Combat Shock was/is really typically low budget 80s awful. (Talk about a big jump, though: From Combat Shock to Horton Hears a Who!... Still, he doesn’t actually seem to do all that much composing anymore, even if does obviously have a decent career in the industry.
In regard to Bruce “Born in the USA” Springsteen, I would say you are technically right but miss the reality of the situation. You are obviously one of the few, the proud, the brave that still know or remember what his song was/is about. Whatever the lyrics as a whole might be, however, the song itself — and its archetypical, defining line and riff — has long been re-appropriated by the masses as THE song expressing American patriotism and aural confirmation of the American Dream. If you go to a rally or event anywhere and hear this song (again, usually in an abbreviated version), you can be sure nobody there is thinking about the wrongs done to the Vietnam Vet. (Just like no US American, when hearing the The Star-Spangled Banner, ever thinks of The Anacreontic Song even if they do think about having a nice cold beer after the fireworks.)
It is this new, re-appropriated meaning of the song that I was referring to and thus I not only see my reference to Springsteen as valid, but also see that given song as his biggest artistic failure…
Not that I actually like his music in general in the first place, but despite my personal tastes I do see him as a serious musician and, at times, a damned good composer and lyricist.
Anyway, time to post some new reviews...
Thanx again for the feedback!
Bryin

Oops! I just saw that (according to IMBD), Ricky G. was the star of the film, playing Frankie Dunlan... so I was/am right about the music being supplied by the movie's star...
Bryin