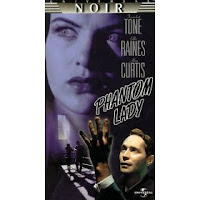 Phantom Lady is the first movie to be produced by Joan Harrison, one of the few female producers to work in Hollywood in the 40s and early 50s. Originally hired to be Alfred Hitchcock's secretary, she went on to help pen some of his classic B&W thrillers, including Suspicion (1941) and Rebecca (1940) before moving into production. Despite her writing skills, however, this time around scriptwriter Bernard C. Schoenfeld is responsible for transferring Cornell Woolrich's novel to the screen. Schoenfeld has a limited but interesting resume of films—including the film noir fluff Macao (1952), the forgotten Lucille Ball noir The Dark Corner (1946) and the grandmamma of women in prison films Caged (1950)—but his script for Phantom Lady is definitely substandard in comparison to the original novel, which kept the identity of the true murderer secret until the end and, likewise, neither characterized the person as an obvious psychopath or had him suffer any ridiculous dizzy spells.
Despite this and other flaws (both in comparison to the original novel and film in general), Phantom Lady remains an intriguing, engrossing and often surprising film noir which not only keeps one interested until the end but also features some truly memorable and stylized scenes—such as the long sequence in which Carol "Kansas" Richman (Ella Raines) tries to psych-out the bartender or, later, the almost nightmarishly ecstatic scene at a jazz jam session where, pretending to be a cheap floozy, she tries to pick the brains of the drummer Cliff (Elisha Cook Jr.). (Love that look she gives herself in the mirror when she suddenly realizes that she has, if but briefly, actually become that which she is pretending to be.)
If Sidmark doesn't seem to always have had a good control of his lead actors, he at least was generally highly effective at presenting those sombre wet streets, dank bars and overall feeling of degeneration that film noir bathes in. Aside from such occasional highpoints of Sidmark's otherwise uneven direction, more than anything else it is the performances of Ella Raines that carries the film. Only 24 year old at the time, she is only not fabulously beautiful but also out-acts everybody else in the move—possibly accepting Thomas Gomez and various peripheral characters, most of whom actually play more to type than act. Amongst the more entertaining "types" cast in the film is a Carmen Miranda imitation played by none other than Carmen's real-life sister Aurora Miranda.
Phantom Lady begins just like the book. Having had an argument with his wife, Scott Henderson (Alan Curtis) goes out for the night, eventually spending the evening with some depressed woman (Fay Helm) with whom he never even exchanges names. Coming home he is confronted by the police and the dead body of his murdered wife, with all evidence pointing against him. The "phantom" lady with whom he spent his evening is nowhere to be found, and nobody who remembers seeing him that night remembers seeing her. Sentenced to die, the only people left who believe him innocent is his secretary Carol "Kansas" Richman (Raines) and Inspector Burgess (Thomas Gomez), one of the very cops who helped put him in jail. In a race to save Henderson before his execution in 18 days, the two begin to investigate on their own, but every lead ends up (literally) dead and cold. At this point the movie swerves dreadfully from the novel, for when Henderson's best friend Jack Marlow (Franchot Tone) returns from South America to help with the investigation, Siodmak and Schoenfeld promptly blow his cover to the viewer and reveal him as the murderer, thus robbing the movie of a lot of suspense and the big surprise ending of the book…
Despite this major flaw, the often second rate acting and the absolutely terrible characterization of the murderer, Phantom Lady remains visually enthralling and exciting, and is well worth searching out and watching.

And now that the review is over, the down and dirty trivia on the two lead males of the film: Alan Curtis is without a doubt one of the weaker aspects of the movie, or at least his acting is. Born Harry Ueberroth, Curtis was a one-time male model who eventually got invited to Hollywood, initially just as background filler. Smoothly handsome, he eventually graduated to leading man status and was given juicy parts in such movies as High Sierra (1941), Hitler's Madman (1943) and The Invisible Man's Revenge (1944). Despite the juicy roles, as is evidenced in Phantom Lady, his thespian abilities were as limited as his skin was good, and by 1947 he was reduced to playing the lead in two of poverty row's PRC Philip Vance productions (P.V.'s Secret Mission and P.V.'s Gamble). A few forgotten z-films later he was in trying his luck, but after about four foreign productions he came back to NYC to die of complications on an operating table on . (Like so many second rate and mostly forgotten actors of yesteryear, there is even a star honoring him on Hollywood's Walk of Fame.)
If Curtis displays a remarkable lack of acting abilities in Phantom Lady, Franchot Tone does the exact opposite and displays some emoting best suited to the theatre background from which he originally came. But though he may be a striking figure and more than capable of displaying both megalomania and a sinister demeanour, Tone’s performance nevertheless tips into burlesque and is hardly an asset to the film.
Unlike Curtis, Tone was a relatively big name in Hollywood at one time and, aside from the obligatory star on The Walk of Fame, was nominated for an Oscar for Mutiny on the Bounty (1935) and was even married to Joan Crawford from 1935 to 39. The product of well-bred bluebloods, he slummed his way through the Cornel Theatrical Department before deciding to go completely bohemian and moving to NYC. There, his involvement with the influential but leftist Globe Theatre in the 1930s eventually got him invited to . Though never officially blacklisted, his involvement in the leftist theatre might possibly be one of the reasons behind the decline his career suffered beginning around the time of the Great Red Scare; he was pretty a has-been by the time he died of lung cancer in 1968. His scandalous relationship and eventual seven week marriage to Barbary Payton in 1951/52, one of Hollywood's legendary troublemaking and (in the end) tragic sluts, probably didn't help his faltering career either, especially since a fistfight caused by it (on September 13th, 1951) resulted in substantial plastic surgery and effected his ability to speak. (According to legendary B-movie producer Herman Cohen, for whom Payton unwillingly made the cult classic Bride of the Monster (1951), Payton "was screwing everybody on the lot" and "like all whores…she had a heart of gold." Gold heart or not, "Hollywood's Hell-raising Hussy" (as the press called her) played ping-pong between Tone and an equally scandalous and hard-drinking Tom Neal—best remembered for the movie Detour (1945) and, later, for killing his third wife in 1965—before she decided to marry Tone and just bonk Neal on the side. Regrettably, Tone found out and eventually, during divorce proceedings, pretty much lost all self-respect and ruined Payton's limited career by anonymously circulating photos (taken by a PI he had hired) of a gartered Payton going down on Neal in a seedy hotel room. Payton went on to a drunken slugfest of a relationship with Neal before slowly sinking into a whirlpool of alcohol, drugs and debt from which she never managed to recover. Found unconscious beneath a dumpster behind a Thrifty Drug Store at Sunset & Fairfax in February 1967 after roughly ten years of living as an itinerate $5 whore and skid row alcoholic, she was sent to live with her parents in San Diego where she died of heart and liver failure on the 8th of May.)
Posted by Abraham at 1:49:00 PM