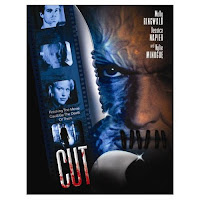 Kimble Rendall, a founding member of the Australian cult band Hoodoo Gurus, left the said band to pursue a career making music videos, television commercials and, if one is to go by this movie — his singular feature film solo credit to date — crappy films. How he ever got around to becoming the second unit director of the two Matrix sequels is a mystery, for in Cut he reveals little if any directorial talent. The best thing this overly hyped and easy to forget body-count production has going for it is a brief appearance by Kylie Minogue as the first dead body. God only knows what she is doing in this mess, though, for the film is very much the type a career-killing celluloid that might be expected of someone desperate for some sort of follow-up to a crappy cover version of a song like The Loco-Motion, but not from someone whose career has been solidified by a duet like Where The Wild Roses Grow or some of her other recent seminal pop dance anthems.
If Minogue's brief appearance in Cut is a surprise, Molly Ringwald's prolonged lead appearance is not. Ringwald, the least visually appealing but (for a time) most successful of all the female Brat Packers of the late 1980s, has little or no real career left to speak of, though she obviously is still able to pay the rent with appearances in crappy television miniseries and lousy films. In Cut she not only looks particularly unappealing and more than a few pounds overweight, but she plays one of the most unconvincing film divas ever. Maybe her casting may have been meant as some sort of hip, film-referential joke on part of the filmmakers, but it actually comes across as little more than desperation on her part. (Jesus, woman, if you're reduced to crap like this, shouldn't you retire?)
The movie opens with a truly innovative, never before utilized concept of "film within film." An over-aged Ringwald (as Vanessa Turnbill as "Chloe") faces off with Scarman (Frank Roberts), but the (intentionally?) incompetently filmed scene ends with Scarman screwing up the shot. Fired from the production by the angry director Hilary (Minogue, easily the best thing the film has going for it), the actor flips out and kills her. He tries to do Turnbill in, too, but she turns the tables on him and pins him to the wall—an action that is immediately followed by a mysterious sizzle of blue sparks. Twelve years later, we learn that the film — entitled Hot Blooded — was never finished. A bunch of film students decide that it would be an excellent career jump-start to finish the movie, and they even manage to contract Turnbill to come back to reprise her role. Off they go, dumpy diva in tow, to finish the flick at its original location, blithely ignoring the movie's supposed curse which spells out death for anyone who tries to finish it. The various faceless victims-to-be become victims one-by-one, with no body else on the production ever noticing. One or two characters — like the lesbian producer — seem to have interesting background stories, but as to be expected, none of them are pursued. Eventually the few survivors left realize that there is not just a killer in their midst, but that the killer is of a supernatural nature, an epiphany of "the total sum of all the creative energy that went into that film." ("What creativity?" the viewer is left to ask.) The big showdown ends with the destruction of the film and of Scarman, but the filmmakers, obviously hoping that there celluloid regurgitation would be a hit, manage to tack on a crappy epilogue permitting the possibility of an eventual sequel. Gag. Cut is to be avoided at all costs.
Posted by Abraham at 4:13:00 PM