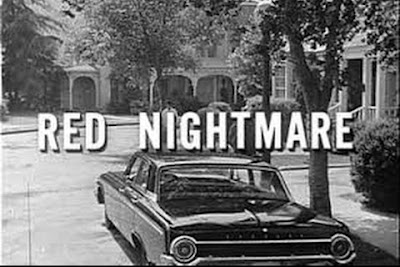 Original entitled Freedom and You, Red Nightmare is vintage US propaganda ala the Twilight Zone — only instead of Rod Serling, you get Jack Webb.
Made for the US government by Warner Bros, Red Nightmare stars a then-cast of TV Who's Who (most now unknown to the average millennial) and was directed by George Waggner (7 Sept 1894 – 11 Dec 1984), an early actor (his film debut was alongside some guy named Rudolph Valentino in The Sheik [1921 / full film]) who ended his years as a TV director; somewhere in between, he also directed such movies as Man Made Monster (1941 / trailer / full movie), Horror Island (1941 / trailer / full film), the classic The Wolf Man (1941 / trailer) and, The Climax (1944 / trailer), a Karloff film featuring Turhan Bey. 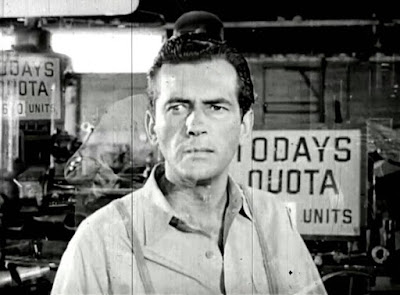 The plot, as given by Through the ShatteredLens:  "Jerry Donavon (Jack Kelly of Cult of the Cobra [1955 / trailer], Forbidden Planet [1956 / trailer], She Devil [1957 / full film]) and The Human Tornado [1976 / trailer) takes his freedom for granted.  So, Jack Webb shows up and casts a magic spell, which causes Jerry to have a dream about what it would be like to live in a communist society.  In fact, you could even say that Jack Webb gives Jerry a red nightmare! [...] A histrionic but sincere time capsule of what was going on in the psyche of 1962 America." 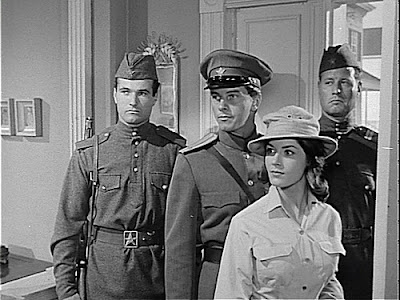 Scriptwriter Vincent Fotre (14 Feb 1901 – 20 Dec 1975), who had previously conscripted the classic non-classic Missile to the Moon (1958 / trailer), went on to write to the stories cult favs Baron Blood (1972 / trailer) and Night of the Witches (1970 / trailer).
Red Nightmare:
One can't help but wonder what the Russian-fearing conservatives of yesterday would think about having a Conservative president helped into the White House by Russia. (They'd probably tweet "Sad!" — or maybe, like our Dad, leave the Republican Party after over 60 years.)
For your reading pleasure —
not from the movie: 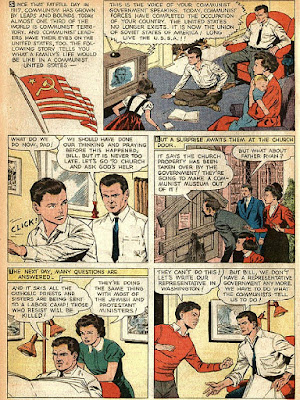