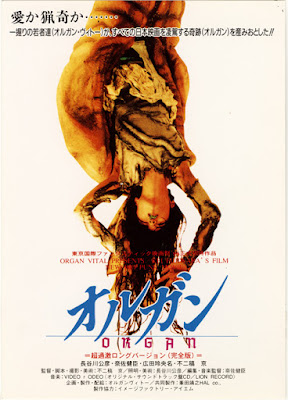 Thank our non-existent god for Wikipedia. If you really don't know what the fuck the film you just saw was about, Wikipedia is normally there to tell you at least the basics. So, after we finished screening our murky DVD of this obscure Japanese "biopunk classic", off to the computer we went to find out that Organ (more or less) tells the tale of "Two undercover detectives, Numata and Tosaka, [who] infiltrate a plastic-covered den where they discover a gang of organ thieves led by the teacher Saeki and his one-eyed sister Yoko (Kei Fujiwara), who are cutting open a victim who is still alive. After a gun battle ensues, Tosaka is captured and Numata escapes. Saeki works at a girls' school where he offers private lessons to teens whom he later harvests for organs. We learn later that Saeki's mother bit off his genitals when he was young and, like his victims, Saeki is now rotting away." 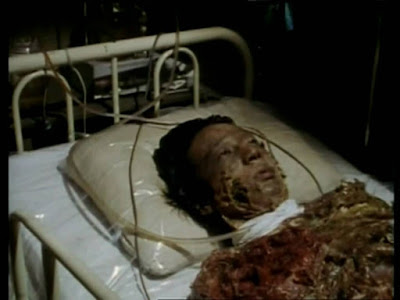 Wow. Sounds intriguing. But it isn't. 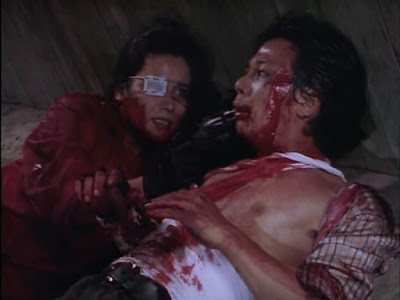 Why? Well, assuming that it wasn't the DVD transfer that sucked — after all, it came with a slipcase and "Four Collector's Cards" so it wasn't bootleg or illegal — then the cinematography sure did: often, it was so murky it was like watching a film through a very dirty car windshield on foggy night. And then the acting: when it wasn't stiff, it was silent-film level. Particularly the guy who played Numata would often glare into the camera and pull faces — whether of terror or of constipation we know not, nor for what reason. Indeed, often one is left with the feeling that he was simply following the off-camera orders of someone who decided that something, anything, had to happen at that moment, reason be damned. (That, we imagine, would be director Kei Fujiwara, who does a half-way decent if one-dimensional and occasionally beady-eyed job as the one-eyed villainess Yoko and who, seven years before Organ, was in the indefinitely better B&W sci-fi horror classic Tetsuo: The Iron Man [1989 / trailer below].) 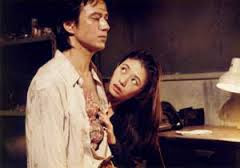 Other problems with Organ are that it truly has too many storylines and too many characters. If the basic thread is that of a policeman searching for his partner, that narrative gets lost often within the tale of the brother and sister — or rather, "tales", as their past is also revealed — and tangents involving corrupt cops, disharmonious family life (do the Japanese really just piss on newspaper in their apartments?), the school situation of the organ-harvesting bio-teacher brother who has a penchant for killing the girls he has sex with (considering his mother bit off his dick as a kid, one wonders how he fucks), a poorly identified twin brother (of the missing cop, who spends most of the time armless and legless and half bio-mass in a box), the various bio-infections and skin conditions suffered by this and that person, and the organ-dealing yakuza. Perhaps if one were to watch the movie two or three times, the various plot lines would tie together in a bow of sorts, however loosely, but the movie is hardly interesting enough to watch once, let alone multiple times. 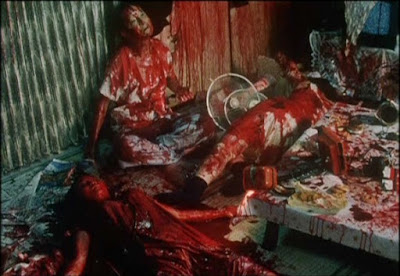 Like Tetsuo, Organ is more art film than anything else, but whereas Tetsuo has an energy and drive and visual and technical creativity that engages the viewer, Organ lacks everything but for an occasional shocking idea and some bizarre imagery. Suspense is non-existence, as is any form of character identification. As a viewer, you can do little but let the movie wash over you, but even then there is a good chance that the dirge might put you to sleep. (Of the group of five that watched this movie when we did, Organ did exactly that with two of us.) And by dirge, we mean the movie: the music of the music is actually pretty good. 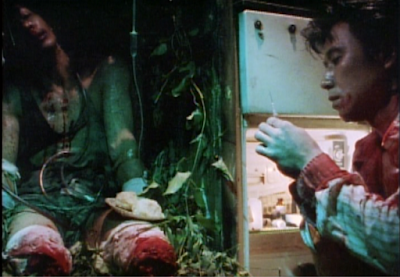 One could, were one feeling forgiving, say that the movie is ever-so-slightly reminiscent of a David Lynch film, but one would also have to add "on a very bad day." There is an obvious penchant for the perverse and the unnerving interlaced throughout Organ, only its presentation is extremely poor and uninvolving. For all its cheap attempts to shock and awe, little remains remembered a few hours later. Organ is, so to speak, an exceedingly unmemorable for a movie that so obviously wants to stick in your mind. 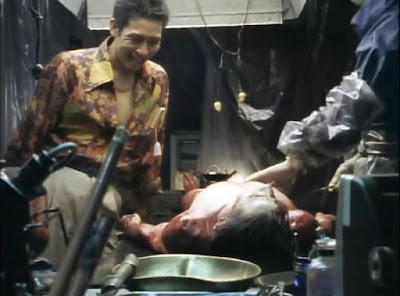