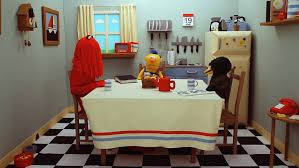 Sesame Street from Hell. This is the first of a series of short created by Becky Sloan and Joseph Pelling. It and the others in the series seem to have been rather popular on-line — regular memes, so to say — but like normal we missed the fuss and only recently stumbled upon this and their other fabulous shorts.
To simply steal from Wikipedia: "Each episode is made to appear like a typical children's television program, consisting of singing and talking puppets similar to those of Sesame Street, but eventually takes a dark turn, usually involving gore. The videos parody children's television shows by ironically juxtaposing puppetry and musical numbers against psychedelic content and disturbing imagery."
Dunno how many episodes have been made to date, but this is the first one made and the first one we ever saw, so we want to share it with you.
Now let's all agree to never be creative again.
Posted by Abraham at 6:34:00 PM