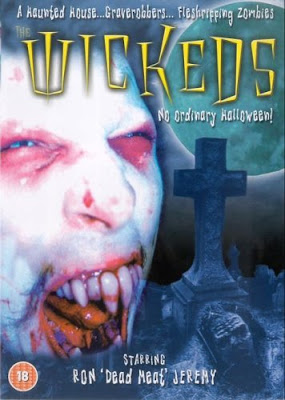 Aka The Flesh of the Living Dead. Supposedly filmed on a budget of $50,000 — so we can only ask: where did the money go? 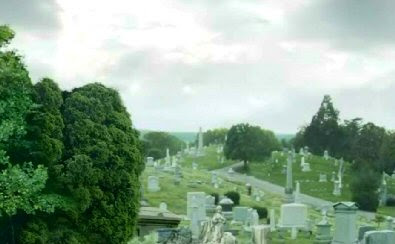 Many a year ago, way back in 2008, we reviewed a typically low budget Tiffany Shepis flick entitled Corpses (2004) and within our typically verbose review we complained that "Corpses sort of feels like a group of actors and their neighbors got together one weekend, smoked a lot of pot and then suddenly decided to make a horror film just for the hell of it." Today, were we to see that movie again, we would surely be much more forgiving, for not only do we now have a greater appreciation of Tiffany Shepis, but we have also seen a lot more movies that make Corpses look like a masterpiece. Some of those much-worse movies, admittedly, by the dint of their innate shittiness, are far more entertaining than Corpses, but most are not. 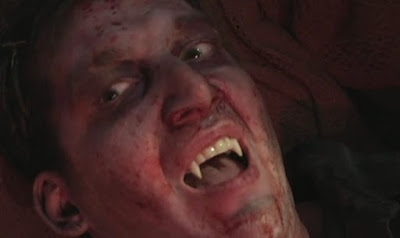 The Wickeds is one of the latter, a perfect example of a total waste of time, a movie that truly and completely looks and "feels like a group of actors and their neighbors got together one weekend, smoked a lot of pot and then suddenly decided to make a horror film". It is an indefensible and painful bore that no one should be subjected to while alive, but would function well as a form of torture somewhere on some level of Dante's inferno. Hard to believe that either the scriptwriter (David Zagorski) or director (John Poague) ever went on to do another film, but they have... and what we know for sure is that we won't be seeking out any of their subsequent projects: a film like this one cannot be forgiven. The Wickeds is one of the worst films we've seen this year, if not years, and not in a good bad way in any way at all. 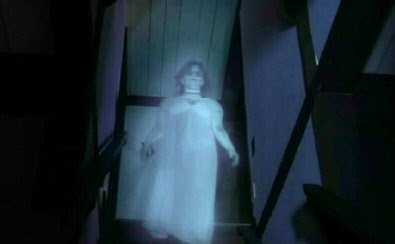 The basic plot is an ancient chestnut: twens out for a party break into a deserted house next to a cemetery when suddenly the dead start to rise and the idiots die one by one. In The Wickeds, the seven one-note victims-to-be are augmented by two graverobbers who, when they steal a magic amulet, cause the dead to rise. Sounds like a straightforward plot, but hardly: added to the brew of angry zombies and meta-references* in the dialogue is a weird and non-jelling combination of vampires, ghosts, possession, and inane scenes and segments that, in the bright sun of the day, never tie together into even the loosest of knots and — far worse — never scare and never entertain. (The characters themselves also seem to have problems with the plot development: when the dumb sex-hungry woman [Kelly Sue Roth] comes screeching into the room and tells everyone about what just happened upstairs, for example, virtually nothing that she says corresponds to what the viewer just saw happen.) 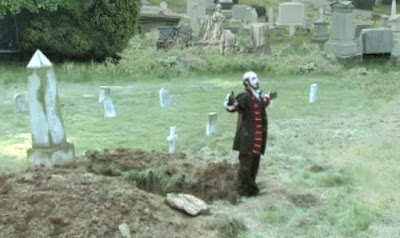 * Examples meta-references in the movie: "I see lots of dead people"; "What would Bruce Campbell do?" and "They're coming to get you, Barbara" — the last of which has been used so often by now that it should be made illegal for film characters to say it. 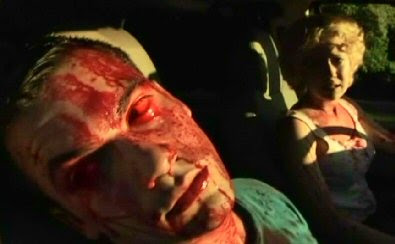 Of course, it is perhaps to be expected that a movie in which the "star power" is supplied by an over-the-hill, overweight porn actor — the ubiquitous Ron Jeremy as one of the graverobbers — won't exactly be a masterpiece. On the other hand, even if Jeremy's fame isn't due to his acting abilities, he actually is sometimes an effective actor in his non-porn films (see, for example, the otherwise overly lauded flick, The Boondock Saints [1999 / trailer]). Likewise, even if the budget really was only (an obviously wasted) $50,000, there is also a such thing as a good low budget horror movie (see, for example, the film that this movie refers to once too often in word and visuals, Night of the Living Dead [1968 / trailer], or one it doesn't, A Carnival of Souls [1962]). 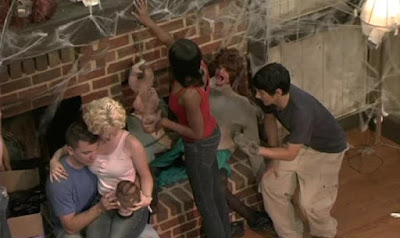 But the fact this straight-to-video (possible) tax deduction is so shitty is not just the fault of the fifth-rate acting of Jeremy or the faceless twens, who are not given anything to work with as characters. It's the fault of the disjointed script, the terrible editing, the chaotic direction, the dull pacing, the predictability (despite the presence of everything and the kitchen sink) of the plot development, the silliness of some of the events — in other words, the general total lack of concern and talent evidenced by everything in regards to the scriptwriting and direction. Were this a film school project — and to say that The Wickeds looks like one does disservice to film school projects around the world — only the most liberal of graders would have given it a D minus. 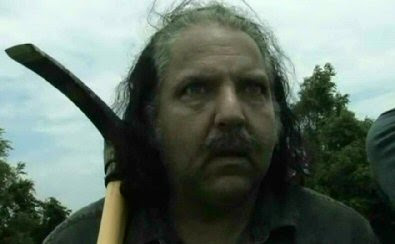 The Wickeds does have one special distinction that we find notable: it contains the longest, most boring and incompetently filmed non-sexy sex scene we have ever had the displeasure of being subjected to — and we've seen a lot of them. Prior to the shit hitting the fan, two characters make-out and dry hump un-erotically for what seems like forever in a scene so sloppily edited that their positions change indiscriminately and clothes reappear and disappear from one cut to the next — and the scene never even pays off with as much as a decent breast shot, despite the fact that the girl does take off her top at one point. (When she comes running downstairs in terror a little later, however, she obviously takes the time to put her bra back on.) A second thing that we also noticed, perhaps only due to the fact that we put the bacon on our table by working with the English language, is that while in the movie itself the characters do at one point speak (grammatically correct) of "the wicked", the title itself is the grammatically incorrect "The Wickeds" — but then, it is a sign of how boring the flick is that anyone (even us) should even notice that. 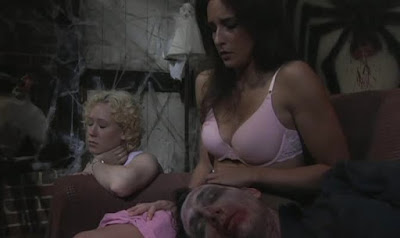 A movie to be avoided — and should you already have the DVD but haven't yet seen it, do yourself a favor and give The Wickeds to someone you hate. 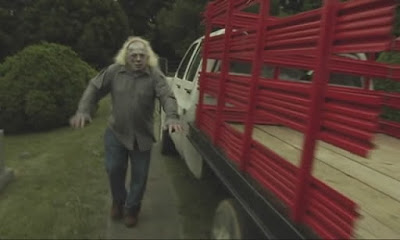