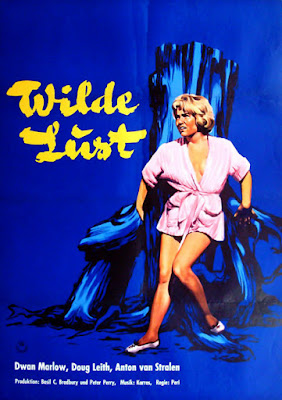 "Oh Frank, I don’t think I should get pregnant right away."
Marion (Dwan Marlow)

Written & Directed by Pete Perry, a.k.a. Ecstasy on Lovers Island — not to be confused with Irwin Meyer's Honeymoon of Horror (1964 / trailer), which doesn't look so bad itself. Honeymoon of Terror was made in the days when couples split the pajamas: the man got the pants, the woman the shirt.
Plot description from TCM: "Marion (Dwan Marlow) and Frank (Doug Leith) are disappointed with Las Vegas and its nightclubs on the first night of their honeymoon and decide to spend the rest of their vacation on Thunder Island. Upon arriving on the island the following day, Frank has to return to the mainland to pick up fuel for the portable stove. Marion remains behind to enjoy the swimming and sunbathing. Although a stranger attacks her, she is able to escape the would-be rapist, who has a club foot. In town, Frank hears tales of a logger known as the 'Ridge Runner' (Anton von Stralen), who went mad, raped two women, killed a third, and has not been seen for 8 years. Frank hears some hunters tell of finding tracks on Thunder Island that might belong to the lumberjack, and he rushes back to the island, arriving to find Marion in the fiend's grasp..." 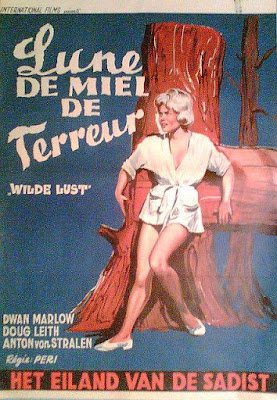