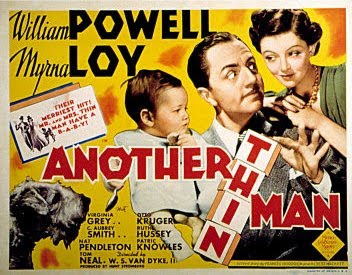 Another Thin Man
(1939, dir. W.S. Van Dyke)
Trailer. The third of the six Thin Man movies, which were based on the writings of Dashiell Hammett and star William Powell and Myrna Loy as the eternally tipsy sleuthing couple, Nick and Nora Charles. This time around, the Hammett story used was The Farewell Murder. 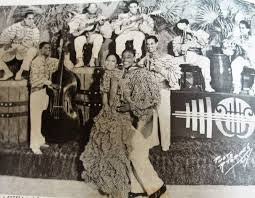 Here, in the midst of their investigations, Nick finds himself at the West Indies Club enjoying his companions more than the dance performance of René y Estela (otherwise known in real life as René y Estela la Hermana de Arsenio Rodríguez). Stella does all the work, but the dance is smooth. 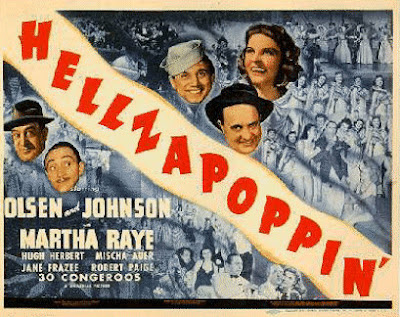 Hellzapoppin'
(1941, dir. H.C. Potter)
A Faux Trailer. According to imdb, Dan Rowan and Dick Martin cited this movie as the main inspiration for the style of their comedy show, Laugh-In (1967) — completely believable, if you've ever seen either the long-gone TV series or this underrated and mostly forgotten movie.
Fantastic Movie Musings and Ramblings explains the film: "Any movie this wild is bound to slip over into fantastic cinema territory a few times before it's all through [...]. Try to imagine Busby Berkeley, Spike Jones and Tex Avery all pooling their talents to put together a live-action movie, and you might have an idea of the mayhem in store. Once again, there are so many gags that the bad ones don’t count [...]"
There are also some pretty wild dance scenes, like this one here (beginning at around 2:45) — which, though the music is very much of its time, seems extremely contemporary in its physicalness. Breakdance Swing, anyone? 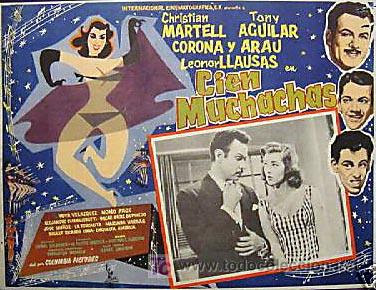 Cien muchachas
(1957, dir. Jaime Salvador, writ. Fernando Méndez)
Director Jaime Salvador (4 Nov 1901 — 18 Oct 1976) went on to do the John Carradine cheapies La señora Muerte (1969 / full, subtitled film) and Pacto diabólico (1969 / scene), not to mention the yet-to-be-rediscovered slice of Mexican psychotronica, The Terrible Giant of the Snow (1963 / scene). Scriptwriter Fernando Méndez (20 July 1908 — 17 Oct 1966) went on to direct a number of notable Mexican horror films: The Vampire (1957 / trailer) and its sequel The Vampire's Coffin (1958 / trailer), The Black Pit of Dr. M (1959 / Trailer from Hell), Ladrón de cadáveres (1957 / full film while it lasts) and The Cry of Death (1959 / trailer).
Cien muchachas is obviously not a horror movie, but we know absolutely nothing about it. Nevertheless, we love this dance scene featuring — we think — Alfonso Arau and Sergio Corona. We also love the music, too. But then, we're major fans of mambo... and cumbia, for that matter. And of the tango, bolero and vallenato, too, actually, though our true love remians milango...

If I recall correctly my Helzapoppin' (and I'v seen it so often that my VHS is dead), I don't think you have the original music by Slim&Slam on the video.

Could be... it's been such a long time since I've seen the movie (we're talking decades here, way back before I even had to shave my now grey facial hair), that when I found this clip I online, I couldn't even remember the scene. But the dance is still the cat's meow.

I found this one : https://www.youtube.com/watch?v=qrcZqnICYbs