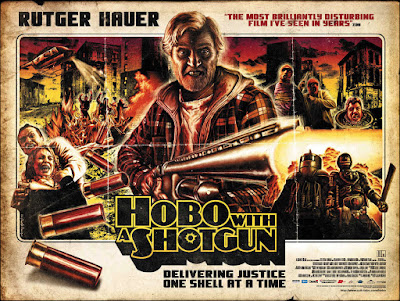 "Please! Please! Don't shoot my dick off, okay? I'm young.
I got too much fuckin' left to do. Please!"
Slick (Gregory Smith)

An unapologetic if postmodern exploitation movie, Jason Eisener's feature film directorial début, like Jon Watts's Clown (2014), began its genesis as a faux grindhouse trailer. As part of the publicity machine for Quentin Tarantino and Robert Rodriguez's fun if uneven double feature Grindhouse (2007 / trailer), which included a variety of faux trailers — namely, Robert Rodriguez's own Machete (original faux trailer), Eli Roth's Thanksgiving (O.F.T.), Edgar Wright's Don't (O.F.T.), and Rob Zombie's Werewolf Women of the SS (O.F.T.) — the dynamic duo held a Grindhouse trailer contest at South by Southwest. Eisener, along with co-writers Rob Cotterill and John Davies, won with his submission (directly below). In Canada, the Hobo with a Shotgun faux trailer was added to the original four for some screenings of Grindhouse; along with Machete (2010 / trailer), it went on to become a real film of its own. (Unlike Machete, it has yet to have a sequel.)
Hobo with a Shotgun —
Original fake trailer from 2007:


Anyone who has seen Eisener and Cotterill's excellent Christmas short Treevenge — our Short Film of the Month for December 2012 — pretty much knows what to expect in Hobo: excessive gore times ten, an obvious appreciation of classic grindhouse product, and a lot of fun, totally tasteless off-the-wall black humor.

And much like in Treevenge, which announces its intentions of excess by using one of the all time most beautiful, classic exploitation themes ever (by Riz Ortolani) from one of the most extreme exploitation films ever (Cannibal Holocaust [1980]), Hobo with a Shotgun lets you know that boundaries are going to be tested by opening with the generally overlooked theme — which in all likelihood inspired Riz Ortolani's masterpiece — by Michael Holm to Michael Armstrong and Adrian Hoven's classic and extreme (not to mention extremely depressing) exploiter, Mark of the Devil (1970 / trailer / music).

Not everything from the faux trailer made it into the real film, but for the most part the adaptation feels faithful. The feature film, however, feels less like a true grindhouse movie of the 70s and 80s than an almost cartoonish metaversion of classic cinema trash. Its over-the-top, wink-wink postmodern execution owes as much to the macabre humor of EC comics as it does to the grindhouse, and the overly saturated, nearly Pop Art-like colors already present during the opening credit sequence reveal that the movie is presenting a reality of all of its own. And while the colors are seductive in a psychobilin kind of way, the dystopian semi-present cum slightly retro yet nevertheless timeless future is bloody, hopeless, and rotten to the core. (Basically, what you can expect in the near future in the US after Trump moves into the White House.)

The town in which the events transpire — a fictional "Hope Town" referred to as "Trump Town" (just kidding: it's "Scum Town", which in all truth is pretty much the same thing)  — owes far less to any sense of reality than it does to those typical towns of terror found in so many cheap-shit Italo Max Max (1979 / trailer) rip-offs that flooded the market in the wake of that movie's success. Only here, no war has destroyed the world, leaving the remnants of mankind to fight or die; in Hobo with a Shotgun, Scum Town is more like a Detroit that never caught the curve (or a poverty-ridden Gotham City, perhaps, without any style, grace, or any architecture of note) and that has been taken over by a psychotic, blood-thirsty Donald Trump incarnation with two equally psychotic sons. And into this town rides not the Lone Ranger or "Snake" Plissken, but a half-there hobo who proves that even the downtrodden can be pushed too far.

The narrative is of course pure comic-book logic and far removed from any sense of reality. Aside from the stock Mr. Big character, Drake (Brian Downey), and his two psycho offspring, Ivan (Nick Bateman) and Slick (Gregory Smith), there's Abby (Molly Dunsworth), the stock hooker with a heart of gold (she even lets the unwashed Hobo [Rutger Hauer] sleep in her bed without taking a shower first), and a variety of lesser-important minor characters who all die. Going the full monty of la-la-land typologies, the filmmakers Eisener and Davies even introduce two nothing less than supernatural super-killers known as "The Plague" — Rip (Nick Bateman, again) and Grinder (Peter Simas) — who, watchful eyes will notice, have even Jesus Christ and Abraham Lincoln on their list of successful hits. And the shotgun, of course, is of the never-ending-bullets kind, usually ready to blow off a hundred heads one after the other without requiring reloading. As can be expected, all of that is heavily peppered with exploding and spraying gore and guts and blood and entrails and goo and red mush.

To say Hobo with a Shotgun is not meant to be taken seriously is almost ironic; the question is whether you as the viewer can laugh at it. If you like comic-book violence that presses boundaries — How about a school bus full of kids burnt crisp with a flamethrower to the tune of the dance classic Disco Inferno? — and can laugh at things like when a woman's hand gets stripped of its flesh when pressed into the rotating blades of a lawnmower, then this baby is for you.

Indeed, if you get down to it, when speaking of lawnmowers Hobo with a Shotgun is perhaps one of the bloodiest and must successful low budget gore comedies since Peter Jackson's Braindead (1992 / trailer). The lawnmower is one of many quick references to past classics, as obvious a reference as the coffin that the Plague drag behind them is to the original Django (1966). Eisener and Cotterill even get a verbal reference to good ol' Mr Tarentino by having a scumbag scream "This is a mother-fucking robbery", and also do a laughable homage to the scene from The Evil Dead II (1987 / trailer) in which Ash does a major job of preparing for war with the evil dead — a scene which in itself is probably a jokey reference to Clint Eastwood's almost-persiflage Dirty Harry flick, The Gauntlet (1977 / trailer).

In any event, someone who pops a DVD entitled Hobo with a Shotgun into their player surely has a specific kind of movie in mind, and that type of person will surely find this movie highly entertaining. Made by gore-film fans for gore-film fans, Hobo with a Shotgun delivers everything it could possibly promise with its bitten-off tongue planted firmly in it cheek. As with Treevenge, but for a whole feature film long, Jason Eisener and John Davies (and producer Rob Cotterill) wallow in in-your-face black and sick humor, presenting a well-made but variably acted obvious labor of love (or at least "let's do what we want" movie) in which the inane is presented as a matter of course and the blood and guts are thrown across the screen with wild abandon. (The dialogue ain't to bad, either.) Recommended.