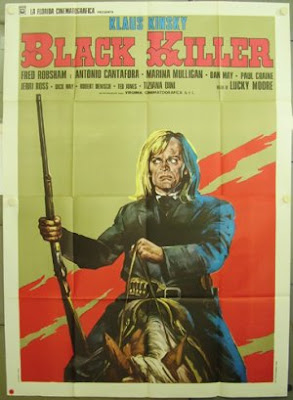 Opening Credits to
the French release:
(Spoilers.) One might assume that we came to this movie by way of everyone's favorite child molester, the cult legend Klaus Kinski, but that is not exactly 100% correct. The actor that initially drew us to this sub-standard, obviously low-budget spaghetti western is the forgotten Norwegian actor Fred Robsahm, who died this year on March 26, 2015, at the age of 71.

Robsahm, after what initially seemed to be a promising start of a pan-European film career with his lead in the once much-lauded but now mostly forgotten movie Flashback [1969 / scene], was ancient and forgotten history by the time Even G. Benestad got around, in 2007, to doing his documentary, Natural Born Star [trailer]), on the washed-up and HIV-positive actor. It was a photo of the young, handsome Robsahm that brought us to Black Killer, and Kinski, of course, was an added attraction, but what really made us look for the film was the presence of the beautiful Marina Malfatti — of, among others, The Night Evelyn Came Out of the Grave (1971 / Italian trailer), The Lady in Red Kills Seven Times (1972 / trailer), Seven Blood-Stained Orchids (1972 / trailer), All the Colors of the Dark (1972 / trailer) and Red Stained Lawn (1973 / Italian trailer) — at her prime (she was 32 when the film came out). And while she — as Sarah, the attractive Indian squaw with a plastic surgeon's nose, perfect aim, and way too much brown pancake make-up — is indeed one of the more enjoyably ridiculous aspects of a movie full of ridiculous aspects, neither her presence nor even her naked ass help save Black Killer from, well, being what it is: a mess.

One knows not where to begin with listing what is wrong with this movie because, well, just about everything is: Black Killer is so badly acted and badly shot and incoherently edited and poorly paced that the cheap-looking sets and even cheaper-looking costumes almost manage to slip by unnoticed. What doesn't slip by unnoticed, however, is that the movie drags once too often, and occasionally even verges on being boring — and that despite a plethora of laughs that it instigates (never intentionally).

One of only two movies the Italian actor Carlo Croccolo (born 9 April 1927) ever directed — credited as "Lucky Moore" he made the undoubtedly equally inept spaghetti western One Gun, A Hundred Graves (trailer) that very same year, with some of the same actors and, possibly, with the same threadbare sets — Black Killer displays a notable lack of directorial talent, if not laziness and disinterest. In regards to style, despite the genre, Croccolo seems to be channeling the work of Jess Franco and not, say, Sergio Leone or Sergio Corbucci. The result is bizarre, to say the least, and perhaps because he seems more to mimic the look and feel of Franco on a truly bad day than Franco on a good day, the odd cuts and pans, bad blocking, excessive and pointless use of zooms, and total lack of visual competency do have an oddly entertaining appeal, if only because the final culminating result is so funny. But funny or not, Croccolo's filmic "style" also makes the movie hard to follow on occasion, despite the fact that the plot is relatively linear, if full of meandering tangents.

Despite the focus on Kinski as the headlined star, Kinski's character, James Webb — one assumes he must be the "Black Killer" of the title, but who knows for sure — is more of a major supporting character than anything else; Fred Robsahm's Burt Collins is actually the central character around which most of the action transpires. Kinski's Webb, in any event, rides into town one day with a horse loaded with books; claiming to be a lawyer, he spends most of the time wandering around town with big books in his hands or watching from windows or explaining the law to the town's judge, Wilson (Dante Maggio). The rest of the time, he busies himself with pulling strings behind the scenes, hiding guns in his hollowed-out books, or shooting bad guys with his books. (No matter how many bad guys involved in a shootout, none ever think of shooting the guy wandering around in the background with books in his hand.) Whether or not Webb is a good guy or bad guy, or what his intentions are, is left unclear for most of the movie, and his propensity for "loaded books" is less logical than simply another (truly ridiculous) nod to the quirky affections of so many spaghetti western heroes following the release of Corbucci's Django (1966).

Burt Collins's intentions, on the other hand, are clear: initially he returns home simply to visit his brother Peter (Jerry Ross of Karzan, Master of the Jungle [1972 / trailer]), but when quick-draw Burt cheats at cards and ends up killing a few of the bad guys, he not only becomes Sheriff but more or less causes a lot of people to die before he finally kills all the manly O'Hara Brothers, all of whom have a truly atrocious fashion sense.

That, at least, is what we were able to distill from the extremely disjointed movie which transpired on our screen.

Kinski does OK as an actor, relying as so often simply on his presence and not on any display of true acting ability. Robsahm, well, there's a reason his career went nowhere; he smiles a lot and is sort of handsome despite the grime, but he is hardly convincing. Most of the other actors — particularly Dante Maggio as the judge, Calogero Caruana  (of Mandinga [1976 / trailer]) as Miguel O'Hara, Enzo Pulcrano as Pedro O'Hara, and to an extent even Croccolo himself as the Deputy Sheriff — seem to think that they are acting in a silent movie, and thus arch and bulge their eyes or exhibit over-exaggerated body language more typical of an early D.W Griffith or Charlie Chaplin movie than a modern western. The female characters are all of the laughable kind, and totally superfluous. Consuelo (Tiziana Dini) seriously exists for no other reason than to be or get nude, and she is or gets nude in almost all her scenes — in fact, at one point, during an exchange with bad guy Ramon O'Hara (Antonio Cantafora, of Juan Piquer Simón's Supersonic Man [1979 / trailer]), she starts out naked, gets dressed, and then gets undressed again. (She dies with her clothes on.) The sexy Indian Sarah (Marina Malfatti) doesn't expose as much skin, but she looks more like a European in a politically incorrect costume on the way to a Halloween party than a Native American, and her presence is far more enjoyable for the laughs she gets than for being convincing. She shoots a mean arrow, though.

Some credit should be given to the music by Daniele Patucchi, which sounds so much like a soundtrack to a spaghetti western that it occasionally verges on becoming a parody of spaghetti western music. Often, hints of incidental themes from more famous movies (Once Upon a Time in the West [1968 / trailer], for example) or western songs (Ghost Riders in the Sky, for example) echo weakly in the background. Still, if the rape scene is in any way uncomfortable, it is due only to the disquieting carpet of sound that he puts behind it, so he obviously put some though into what he was composing. (Patucchi, who that same year did the music to David Friedman's The Terrible Swift Sword of Siegfried [1972 / trailer] and Mario Mancini's Frankenstein '80 [1972 / German trailer], went on to do the music to Il sesso della strega / The Sex of the Witch [1973 / scene], Umberto Lenzi's Mondo cannibale [1972 / German trailer], and two José Ramón Larraz movies, La muerte incierta [1973 / 5 minutes] and Estigma [1980 / excerpt]).

One thing for sure, when talking about the obscure and forgotten movie Black Killer, we aren't talking about some long-underappreciated masterpiece — unless, that is, you want to talk about masterpieces of crap. And even then, as laughable and as bad as Black Killer is, it has one too many dry spell and thus simply drags too much to be a truly enjoyable piece of craptastic cinema. Black Killer borders the edge of psychotronic enjoyability, often wetting its toes if not its ankles in the waters of the surreally stupid, but for all its teasing, for all the come-hither-and-enjoy-my-inability allure it exudes, Black Killer just never truly goes overboard to being truly enjoyable, fabulously fun flotsam, despite being unmitigated flotsam.
Recommended with major reservations, if at all, to fans of bad movies; fans of westerns, spaghetti or otherwise, might want to avoid Black Killer. 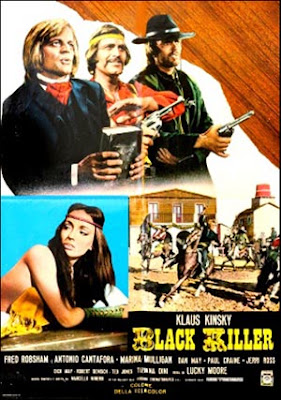