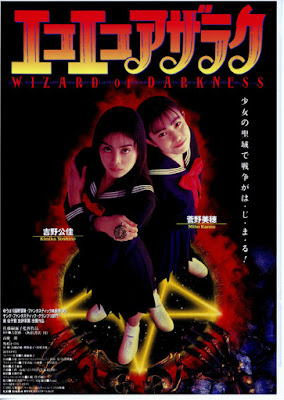 (Spoilers.) Another obscure movie (for Westerners) found in our DVD pile of "unknown movies", a mound of Sisyphean proportions accrued over the years that never seems to shrink no matter how many times we blindly pull out a DVD to watch.
Trailer:
Eko Eko Azarak: Wizard of Darkness, like the name of the director, Shimako Satō, was totally unknown to us. And after having seen the movie and having researched the flick's background a bit, we just couldn't help but think of that highly (if sadly) entertaining Tumblr blog, Shit People Say to Women Directors, 'cause, like, women directors are a rare thing... and what do you know, but "Shimako" seems to be a women's name in Japan and the flick was made by one of the "weaker sex". Not that anything about the film would've indicated the sex of the director — which is why we thought of the previously mentioned blog. And as our meandering mind tends to wander, thinking of the above Tumblr made us think in turn of that disgusting paean to intellectual retardation, the Tumblr Women Against Feminism. What does all that have to do with Eko Eko Azarak: Wizard of Darkness? Hello! Turn on that light bulb in your head and connect the dots yourself for a change. 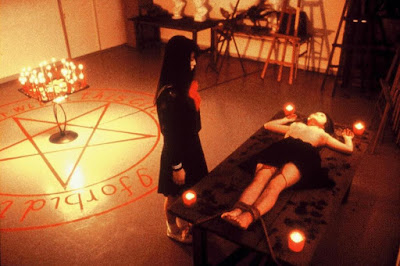 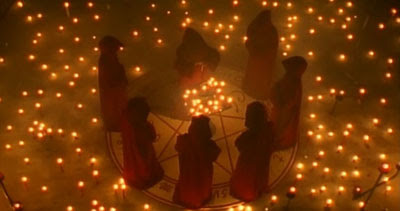 At its core, Eko Eko Azarak: Wizard of Darkness is basically a teen bodycounter (with a bodycount of around 15), the minor difference is that the final girl and heroine of the flick, Misa Kuroi (Kimika Yoshino) is a witch. She transfers to a school which, we learn, is the location where Lucifer is to be summoned by a group of unknown Satanists and, rather ineffectually, she tries to stop both the event and save the lives of a variety of her classmates doomed to die as their deaths are a key to the summoning. Kept after school one evening to retake a maths exam, much like in the absolutely dreadful Danish bodycounter Final Hour, also from 1995, the students are suddenly unable to leave the building and start dropping like flies. Unlike Final Hour, however, as cheesy as Eko Eko Azarak: Wizard of Darkness is, it is also relatively well made, highly atmospheric, occasionally even scary, is populated by at least some characters that gain viewer sympathy and, at least until the final scene, remains both an interesting and effective movie. It's a shame about the last ten minutes, though. 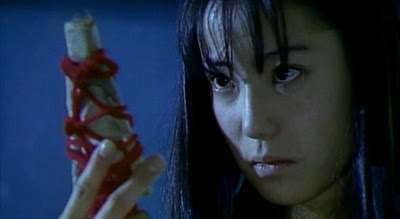 Personally, we were rather happy to finally see an Asian horror flick that didn't fixate on ghosts with long hair and not only included some nice gore (as well as some cheesy computer-generated stuff) but also had a couple of totally gratuitous and exploitive lesbian scenes. (Less happily, in this regard, is that lesbianism is presented as either a reflection of a person's corruption or, if you are not corrupt, then as an act that requires punishment. Also in this regard, the old chestnut about "if you have sex you die" is less applicable, because many [probable] virgins die in the movie.) The first death of the flick, of an unknown women fleeing in terror through the streets of an unnamed town who meets her death by way of steel girder, is a highlight and is really never again equaled throughout the entire movie, though the lesbian student nailed to the table and the death by overflowing toilet are almost as memorable, each in their own way. 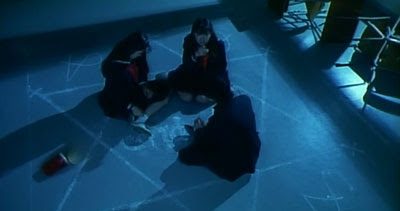 We would be hard-pressed, however, to call this the movie "Japan's response to Buffy the Vampire Slayer" (as is done on the DVD cover) because, well, not only was Buffy consistently campy, but Buffy was also usually effective at what she was doing. Unlike in Eko Eko Azarak: Wizard of Darkness, which is far more cheesy than campy, and in which Misa is not at all effective: she not only fails to save anyone, but is herself killed and Lucifer is also summoned — upon which the movie suddenly becomes an unsatisfying headscratcher as, going by the fate of the summoner (and confirmed by Misa's inability to save anyone), there was no reason for the good witch to even bother showing up at the school in the first place. And how the fuck does she manage to suddenly return from the dead? 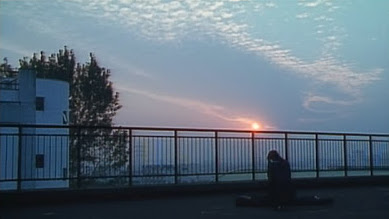 In the end, we would say that Eko Eko Azarak: Wizard of Darkness is more about the journey than the destination. Shot on a low budget in two weeks, it is better directed and made than many flicks of its ilk and this, combined with a relatively low-fat story and linear narrative, makes it an enjoyable B-film experience up until the final ten minutes, after which the movie falls totally apart and deflates like a pin-pricked blow-up sex doll. 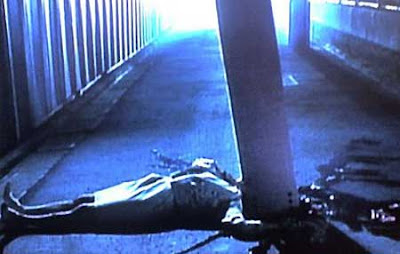 On the whole, when compared to the last dead teenage film we saw featuring kids trapped in a school — the previously mentioned example of dripping santorum, Final Hour — Eko Eko Azarak: Wizard of Darkness is a frigging masterpiece. But taken on its own, it is ultimately a disappointment, and is thus recommended only with reservation. (Nevertheless, we do plan to someday watch another Eko Eko DVD, Eko Eko Azarak III: The Awakening [2001], which currently still languishes in our Sisyphean pile of DVDs.) 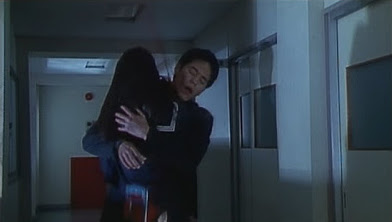