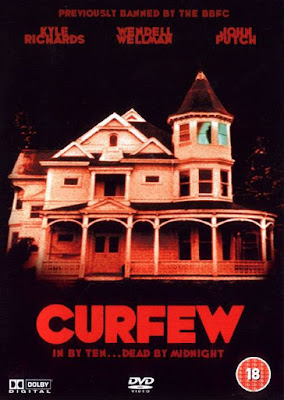 Our significant other does not like to watch the same kind of movies that we do. When watching DVDs together, a compromise is usually achieved by watching "art" like Titus (1999 / trailer) or something from France (we both love Jean-Pierre Jeunet, for example, the director of Delicatessen [1991 / trailer], City of Lost Children [1995 / trailer], Amelie [2001 / trailer], and Micmacs [2009 / trailer] — as well as the mildly disappointing A Very Long Engagement [2004 / trailer] and the black comedy that is Alien 4: Resurrection [1997 / trailer]*), but in general we end up with Hollywood mainstream products like Men in Black I (1997 / trailer), II (2002 / trailer) and III (2012 / trailer) or the type of crap often referred to as "women's films", worthless fertilizer with gag-worthy titles like What Women Want (2000) or Dirty Dancing (1987). 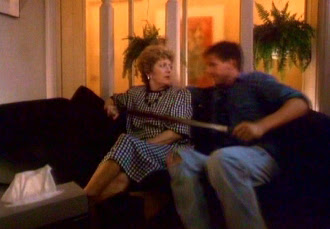 * We have to say, though, that even his worst films are better and more enjoyable than most mainstream flicks coming out of Hollywood.
One "women's film" night, owed to her after a few tacky selections on our part, she pulled out some obscure DVD entitled Letter to Juliet (2010). And though it sounded bad, since its cast did include Fabio Testi (What Have You Done to Solange? [1972 / trailer], Four of the Apocalypse [1975 / trailer], Dead Men Ride [1971 / trailer] and much more), the great Franco Nero (Django [1966 / trailer] and much, much, much more), the occasionally interesting Vanessa Redgrave (Blow Up [1966 / trailer], Ken Russell's The Devils [1971 / trailer] and more), and the undeniably extremely hot Amanda Seyfried* (Jennifer's Body [2009] and Lovelace [2013 / trailer]), we said "OK." 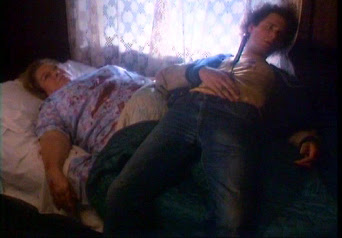 * Whose presence and beauty is only matched (at 180 degrees reverse) by the quality of her projects — if she doesn't start choosing better scripts, she's going to disappear in the same way as "superstar" Thora Birch.
Oh — The Pain! The Excruciating Pain! For months of Sundays thereafter, the mere thought of Amanda Seyfried did the exact opposite of before and rendered us a limp noodle. Yes, Letter to Juliet was crap, it was total shit, it was almost a reason to go single again. And it was also directed by Gary Winick (31 March 1961 — 27 February 2011), the man who made the movie we want to write about tonight, 1986's "horror thriller" entitled Curfew. In fact, Curfew is his directorial début. We would perhaps make some comment about Letter to Juliet and Curfew being as different as night and day, were it not that they do have something major in common: they both suck. And not mouse dick, but elephant dick. 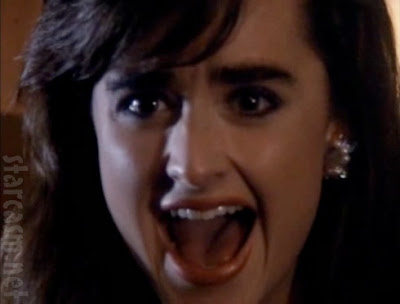 The basic plot of Curfew is a regurgitation of William Wyler's home invasion film The Desperate Hours (1955 / trailer), which, based on novel and subsequent play by Joseph Hayes, has been remade officially (for TV by Ted Kotcheff in 1967 and by Michael Cimino in 1990 [trailer], for example) and unofficially (including at least one Bollywood version, 36 Ghante [1974 / a song]), and revised/rewritten any number of times. In Curfew, the original three desperate escaped convicts on the run have been changed to two murderously wacko escaped redneck convict brothers out for revenge, the violence vamped up a bit, the acting and direction seriously worsened, and any and all of the positive aspects of the original jettisoned. To put it bluntly: Curfew is pure santorum.

Despite most of the violence in Curfew being of the inferred kind, the movie was once banned as a video nasty in England, a fact proudly plastered on the DVD cover. (Oddly enough, however, it never mentions that the story, being a riff of Desperate Hours, is ever-so-slightly based on actual events, as Joseph Hayes based his original novel and play on a home invasion that occurred in Whitemarsh, Pennsylvania, in 1952.) Today, and despite the movie's bodycount of about 13, that Curfew was ever banned anywhere is truly hard to believe, as neither the violence nor the little sex is all that extreme, even by the standards of the end of the last century. True, Curfew does in an ineffectual and unskilled manner offer a slight foreshadowing of the torture porn genre that arose with snoozers like Hostel (2005 / trailer), but almost everything that happens, happens off-screen, and neither the blood nor the nekkid flesh are copious — so what was the fuss? 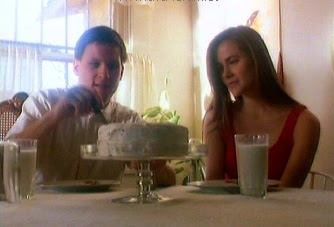 That Curfew is gonna suck is already obvious in the first five minutes, when the viewer is treated to a unbelievably poorly staged, filmed and acted cake-eating scene that proves to be the dream of dumb-shit killer brother number one, Bob Perkins (John Putch of Skeeter [1993 / trailer] and Jaws 3-D [1983 / trailer]), who then awakens in the jail cell he shares with dumb-shit killer brother number two, Ray Perkins (Wendell Wellman, seen somewhere in Klansman [1974 / trailer] and Clint Eastwood's badly dated Sudden Impact [1983 / trailer]) — a jail cell twice the size of many an apartment we've lived in. (And since when are sibling killers put in the same cell, anyway? Death row or not, they'd be kept separate.) 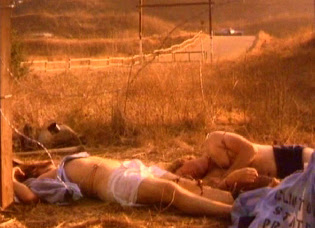 From here, the flick cuts to small town USA, where the staging and acting doesn't improve any,  and we get to watch the inane evening spent by the wooden* lead "teenager" in trouble, Stephanie Davenport (a 20-year-old, square-jawed Kyle Richards of The Car [1977 / trailer], Eaten Alive [1977 / trailer] and The Watcher of the Woods [1980 / trailer]), as she wastes her time with her "friends" — With friends like that, who needs enemies? — before rushing home because of her 10 PM curfew. The now-escaped killer siblings, however, whom the viewers have had the pleasure of watching kill their way across the state on a mission of revenge against all those who had a hand in sending them to death row, beat her there. Thus the yawner night of psychological and physical torture begins. Why the killer siblings, after revealing themselves multiple times as relatively quick and single-minded about murder, should suddenly decide at the Davenports' house to use the whole night to entertain themselves with their victims is never explained and rather unconvincing. 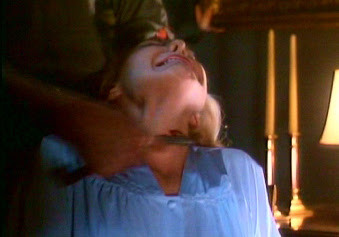 * To degrade her performance as wooden is perhaps unfair, as almost everyone in the movie is wooden, with the possible exception of the overacting killer siblings.
The early obnoxious teens having fun and incompetent sheriff stuff set at the diner is an insult to the viewers intelligence — neither in any way realistic nor truly "funny", like most of the scenes in the first half that don't involve the killer brothers, it all comes across less as furthering the story than as simple filler. Up until the sheriff brings Stephanie back home, Curfew is a total snoozer, despite the various incompetently staged murders the Perkins Brothers commit along the way after escaping prison (how they escaped is neither shown nor in any way explained — one minute, they're in jail; the next, they're not). That Stephanie even falls into the hands of the killer siblings relies on an act that totally negates the concept of maternal love and sort of makes the viewer think that Momma Davenport (the unknown Jean Brooks*) deserves to die. (Not very helpful in making the viewer identify with the "good guys".) 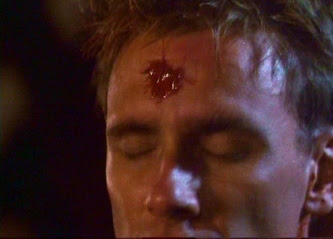 * Not to mistaken with the great but forgotten Jean Brooks (23 December 1915— 25 November 1963), of The Seventh Victim (1943 / trailer), The Leopard Man (1943) and The Crime of Doctor Crespi (1934 / scene), a talented and beautiful actress whose career went nowhere and who eventually died of malnutrition and alcoholism.
The last half of the movie, the night of torture, is a little better than the first half, if only because some of the scenes do sort of make the viewer flinch now and then — the dead breasts are an expected but effective shock, for example, and one does cringe when the daughter is pulling glass out of daddy's back and during the extended scenes with momma that infer rape and torture — but everything is so poorly staged, so badly acted, so terribly written, so dreadfully put together that Curfew never really effectively does anything that is expected of a suspense or horror film, like build viewer identification with the characters or keep the audience on the edge of the seat. Really, it almost defies believability that a movie with as many deaths as Curfew could be as boring as Curfew actually is. 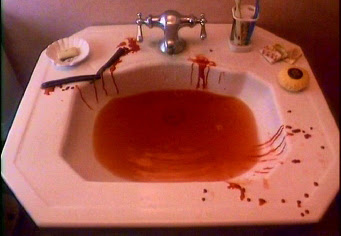 The most amazing aspect of this movie is that anyone involved ever went further in the film business. Curfew's tagline was "In by ten. Dead by midnight"; it should've been "In by ten. Dead by midnight. Killed by boredom." The awkward last scene, when Stephanie turns Dirty Harry, is good for a belly laugh, at least, but really: no belly laugh is worth the movie that precedes that one. 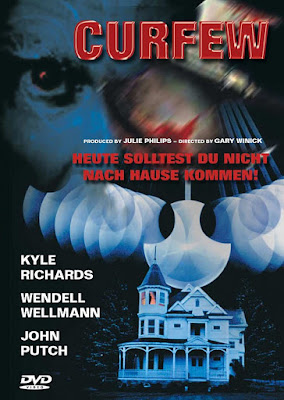