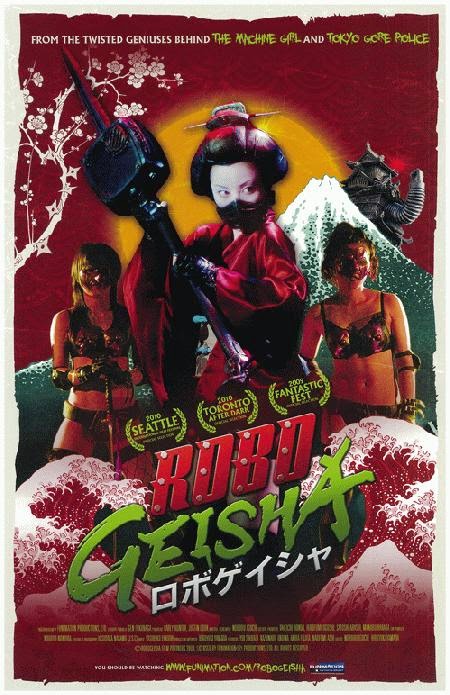 (Spoilers.) We came to this movie via its mondo trailer and our enjoyment of such of such great Nippon pop exploiters as Meatball Machine (2005), Tokyo Gore Police (2008) and Vampire Girl vs. Frankenstein Girl (2009). Little did we realize that the director and scriptwriter, Noboru Iguchi, is the same man as behind Zombie Ass: Toilet of the Dead (2011 / trailer), one of the Japanese exploiters that we found so stupid and cheap that we never bothered to review it, and the even cheaper and pixilated sci-fi porn horror video Final Pussy (2005), which we found mildly interesting in a Hardgore (1976 / scene) kind of way but not worth watching to the end (if only due to the pixilation and the fact that it was in Japanese without subtitles, and we like to understand the dialogue of the gore-drenched, mondo fuck films we watch).

Robo Geisha is without a doubt the best of three Noboru Iguchi movies we've seen to date — a statement which really isn't a complement — and it is good for a number of laughs, but it's also nevertheless occasionally yawn-inducing, overtly cheap-looking and, at 101 minutes, also overstays its welcome. Yes, it's a wild and wacky concept and also has a mostly wild and wacky execution, but it's also extremely lackadaisical in the script and special effects department, defects that take an overhand and severely hamper one's enjoyment of the movie. 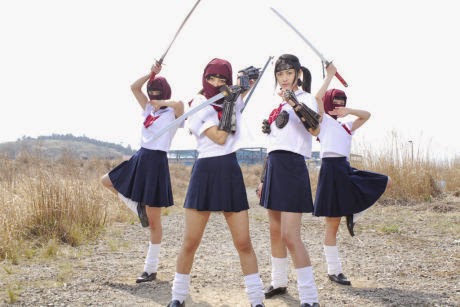 The movie opens promisingly enough, with an entertaining scene of an attempted assassination of a politician being entertained by a geisha: his entertainment turns out to be a robot that develops a circular saw for a mouth and tries to behead him while his bodyguards are wiped out by two samurai-wielding women dressed in black skimpies and wearing tengu-inspired phallic masks (ala those in Clockwork Orange [1971 / trailer]) who shoot shuriken stars from their butt and acid milk from their breasts. The politician, however, is saved in the nick of time by the titular Robo Geisha (Aya Kiguchi, seen further below [not from the movie], of Fear & Loathing & Lulu & Ayano [2010 / trailer]). 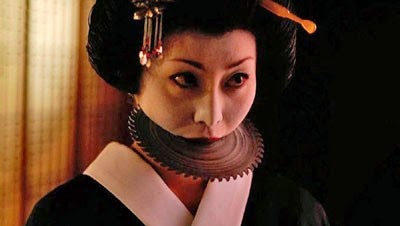 The opening is perhaps one of the strongest scenes of the movie, and it ends up serving the function of allowing Robo Geisha to tell her creation story as one long flashback — a story that ends (SPOILER!) not only with her death, but also with the destruction and dismantling of the entire robo-geisha army and the deadly, samurai-wielding, tengu-masked female duo. Hello? If she's dead and doing geisha dances in heaven with her sister, and the geisha army no longer exists, how can she show up to stop killers that are no longer around? 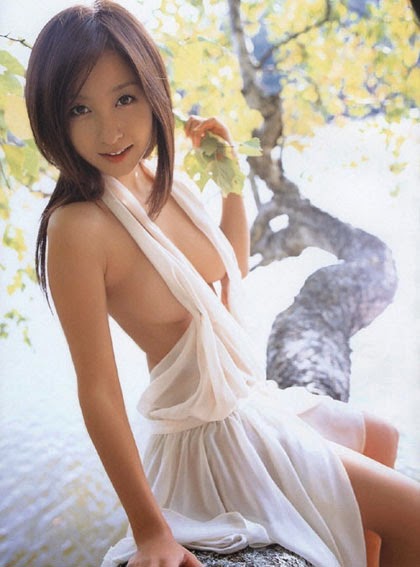 Aya Kiguchi says "Come Hither."
OK, perhaps a logical narrative is a bit too much to expect from a movie about robo-geishas and that features — aside from circular-saw mouths and shuriken-star-shooting butts — machine-gun boobs; swords popping out of mouths, butts and armpits; "schoolgirls" fighting robot samurai; a building that that transforms into a giant robot and stomps through Tokyo like Godzilla; a geisha that transforms into a super-fast tank capable of driving along building walls; and dozens of other crazy ideas. Indeed, Robo Geisha has more crazy ideas than most stoners have in a month of toking, but, hell, we do like our beginnings and endings to match and view such narrative sloppiness as disrespectful of the viewer and the movie itself. If the makers don't give a shit, why should we? 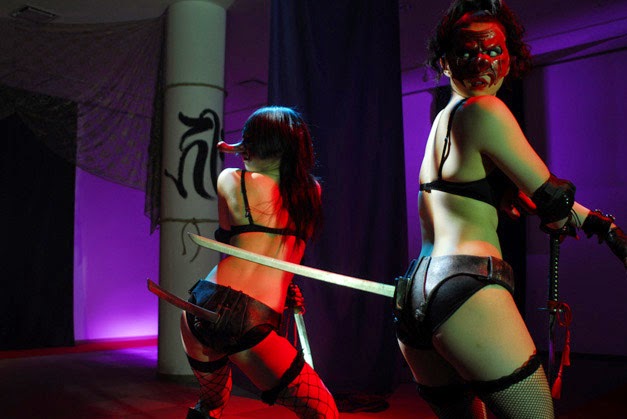 This sloppiness is also evident in the special effects created by Yoshihiro Nishimura, "the Tom Savini of Japan", the man responsible for the gore excesses of the above-mentioned gore masterpieces Meatball Machine, Tokyo Gore Police and Vampire Girl vs. Frankenstein Girl. Unlike in those movies, however, in Robo Geisha the effects often have an overtly K-Mart quality to them, and while the constant obvious cheapness might be mildly funny at first, it also quickly wears thin. (Tom Savini would not be proud of them.) Concepts that might be funny in themselves — such as houses spraying geysers of blood whenever they are knocked down by a giant robot — fail to ignite visually or humorously due to the previously mentioned cheapness of the CGI, and this recurrent flaw causes many hilarious concepts to fail due in the repetitiveness of the obvious shoddiness of their execution. 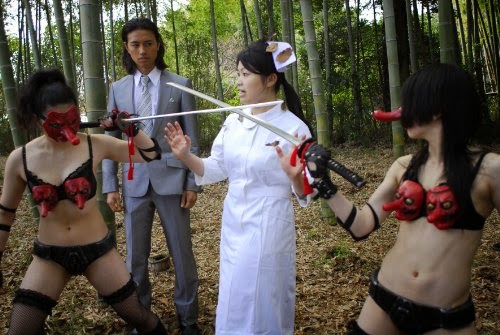 Furthermore, for all the visual and conceptual craziness, Robo Geisha also often seems oddly slow and drawn-out, especially when it spends time on the sibling relationship between Robo Geisha 1 and her abusive sister Kikue (Hitomi Hasebe), not to mention all Robo Geisha 1's belly-button gazing before and after becoming a killing machine, and the whole bit about the army of geriatrics looking for their children. Robo Geisha also sometimes seems as if it is actually trying to convey some sort of message, some sort of theme, and its attempts to do so lessens the effectiveness and sincerity of the movie by diluting the true reason it is there: to be a funny, over-the-top slice of contemporary pop trashiness. 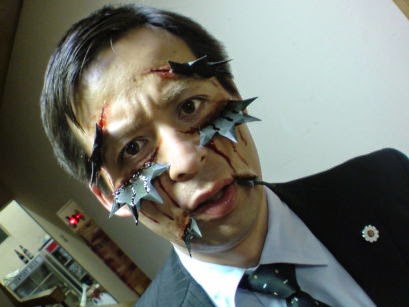 All complaints now aired, our final judgement of the movie is that yes, it has a ton of flaws and the flaws seriously detract from the movie. Still, unlike Noboru Iguchi's abysmal Zombie Ass: Toilet of the Dead, it is not a total waste of time and is mildly enjoyable at times. Nevertheless, there are enough better examples of Japanese power-pop gore (both funny and serious) out there, so why consciously watch a lesser vehicle? Watch and enjoy the trailer — it doesn't have any of the dry stretches of the movie — and then go for a better-made example of the genre instead. But if Robo Geisha is all you have at hand, keep your expectations low and you'll probably enjoy it. 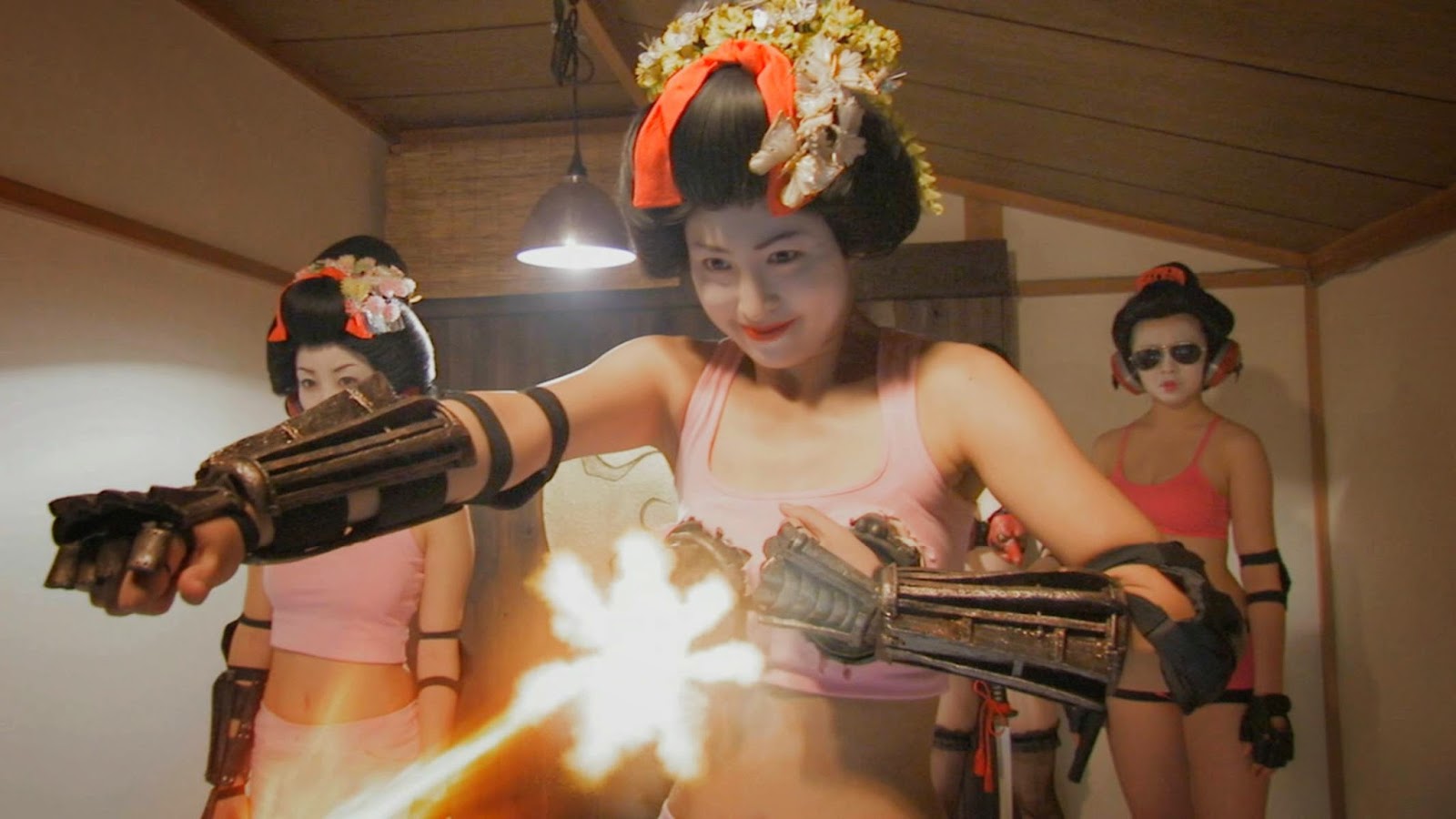