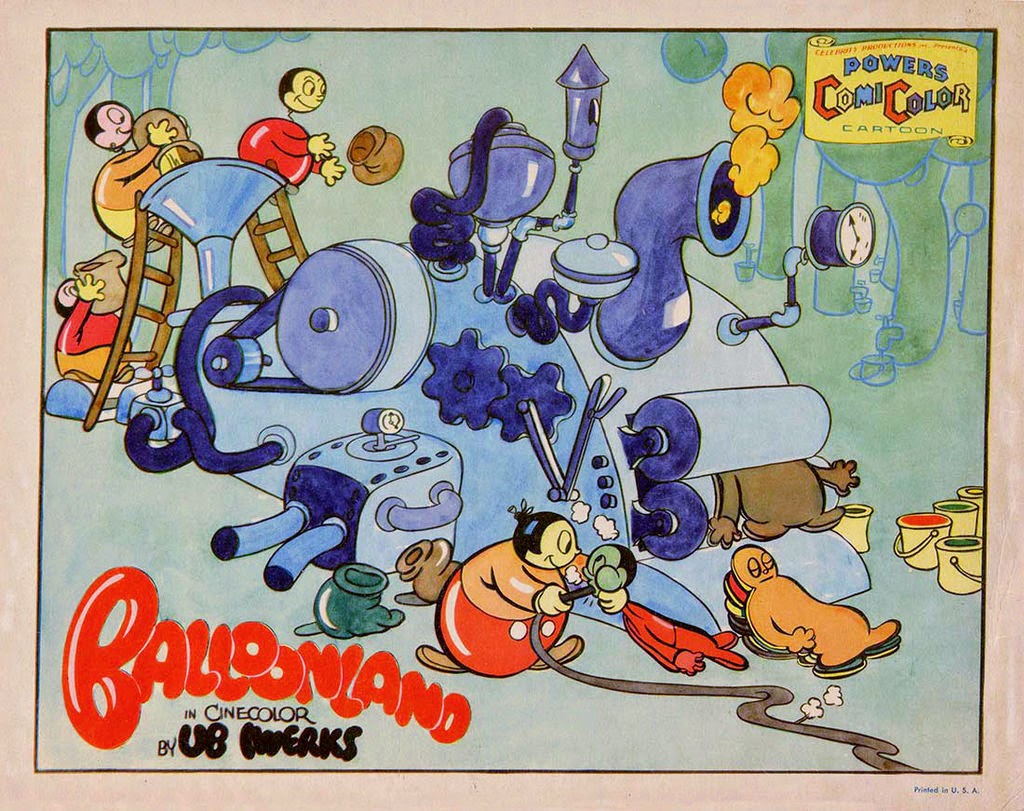 Aka The Pincushion Man. Way back in 2012, while researching the old Max Fleischer cartoon Bimbo's Initiation (USA, 1931), which we presented as the Short Film of the Month for January 2013, we came upon the entertaining Cracked.com online article 5 Old Children's Cartoons Way Darker Than Most Horror Movies, whence we found Swing You Sinners (1930), our Short Film of the Month for October 2013. And now, here, yet another bat-shit crazy short from days long gone by that we were led to by Cracked.com, a masterpiece of a drug-addled kiddy cartoon by the great Ub Iwerks (24 March 1902 — 7 July 1971) — who, by the way, not only co-created Mickey Mouse but was the creative power behind our Short Film of the Month for March 2010, The Skeleton Dance (USA, 1929).
Balloon Land is one of 25 animated short films making up the ComiColor Cartoon oeuvre, which Iwerks produced between 1933 and 36 using "Cinecolor"; Iwerks studio folded soon thereafter and he spent the rest of his life working for others — among his roster of achievements: the special effects to Alfred Hitchcock's The Birds (1963 / trailer), for which he was nominated for an Oscar. (On a less prestigious note, but concerning the short Balloon Land and not Iwerks: Balloon Land is seen in one of the all-time great bad films that help make Ed Wood Jr look like Orson Wells, The Devil's Gift [1984 / trailer]).
The more generally famous animator Chuck Jones, who worked for Iwerk early in his career, once said that "Iwerks is Screwy [Skrewi] spelled backwards." And while Iwerk's last name is real (i.e., inherited from his father, Eert Ubbe Iwerks), in idea Jones is conveying is the truth — and Balloon Land is perhaps one of Iwerks' screwiest cartoons of all. It is also, as Cracked.com points out in a paragraph entitled Condom People vs. The Masturbating Monster, oddly perverse from frame one: "Right from the title screen, this 1935 cartoon [...] lets you know there's going to be a somewhat disturbing recurrent motif in the story. Let's see if you can spot it." 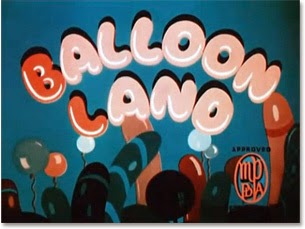 The short opens with an illustrative presentation of the reproductive processes of the Balloon People, followed by an educational ditty fit for a horror movie: "Now beware, have a care, you're just filled with air, a single pin would rip your skin, and the Pincushion Man in the forest there would pop you both if you don't take care."
Needless to say, like any good bodycount film, no matter how short, the incredulous youth wander off to look for the mythical killer and find him: a psychopathic perve who kills just 'cause he can and who looks literally like he is either always sticking the tip of his sharp prick in his nose or is poking his pointy member at kids or strangers. We can't help but ask, "What drugs were they one when they thought this one up?"
Of course, like so many films of the day (and long before and long after [see, for example, our Short Film of the Month for May 2013, Jasper and the Haunted House]), the mandatory, offensively racist stereotype can't be skipped — neither the Balloon Man who lets the psycho into Balloon Land nor the second victim of Pincushion Man's rampage would look out of place eating fried chicken in a watermelon patch.
These two offensive aspects are part of the appeal of Balloon Land, our Short Film of the Month for August 2013. We're sure you'll find other appealing aspects when you watch the short yorself. Enjoy.
Posted by Abraham at 12:24:00 PM