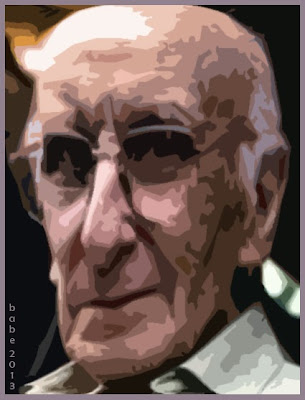 "José Ramón Larraz (born 1929 in Barcelona) is a Spanish director of exploitation and horror fims such as the erotic and bloody Vampyres (1974). Larraz began making films in England, then in 1976 apparently relocated his operations back to Spain. He made many different types of films, but is best known for his horror films. His last few horror films were Spanish/ American co-productions. He apparently retired from filmmaking in 1992 at age 63." (Wikipedia, retrieved 05.09.13)
It was José Ramón Larraz's great film Vampyres (1974) that first even made us conscious of the concept of "Eurotrash". Years ago, in La La Land circa 1984, on a stoned late-night jaunt with some friends downtown on Broadway, the neon marquee of the now long defunct grindhouse Cameo Theatre sang a Circe song of a two-buck quadruple screening. While we no longer remember all the titles, one was "The Voyage of Tanya" and the other Vampyres... 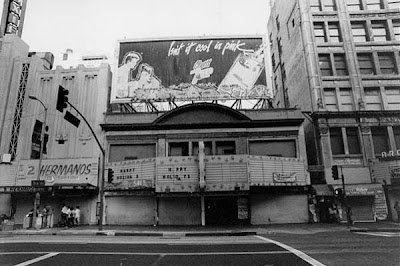 In all truth, it was the sexy sounding "The Voyage of Tanya" that drew us into the theatre, which at night was less a grindhouse than a flophouse where the unified snoring of the homeless sometimes drowned out the dialogue up on screen, but the decidedly sexy-sounding title turned out to actually be a kiddy film originally titled Paddle to the Sea (1966 / first 10 minutes). We sat through it anyway — at less than 30 minutes, it's a relatively short film — and then were confronted with Vampyres, perhaps the first Eurotrash film we ever saw outside of a Hammer film on TV (if Hammer even counts as Eurotrash).

The Trailer to Vampyres:

Vampyres Trailer von zombienationdotnet
It bowled us over: so stylish, so arty, so full of strangely sexy ladies, so bloody — and so much sex. To simply quote Pete Tombs at Fangoria: "[His] early, low budget, quickly shot works have the unmistakeable stamp of an 'auteur' [...]. Like all his best work, they share a slim scenario, a small cast, an isolated rural location, and the atmospheric woods and misty 'golden hour' landscapes that nurture his dream spaces. There's something old fashioned about many of Larraz's films (it's no surprise to discover that one of his favourite US movies was the 1946 Robert Siodmak chiller The Spiral Staircase [trailer]) and yet there is something almost indefinably modern about them too. It's in the way they are framed, the way the shots are cut, the camera angles: that's where his artist's eye comes in and it's what makes the best of his films special and timeless."
In a later conversation with friends, the term "Eurotrah" popped up, and from then on we knew one of our favorite "genres", if one can even call Eurotrash a genre...
In any event, Vampyres was a film from José Ramón Larraz, and though we have never seen another film by the good man, we hold him dear in our heart for the experience he gave us and the horizons he opened... And now he has died.
We take our hat off to him — may he Rest In Peace.