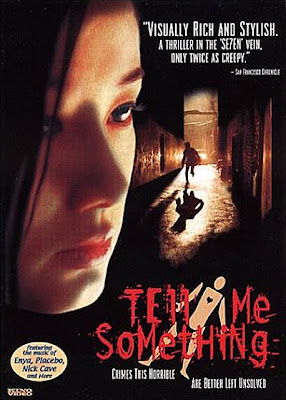 (Major spoilers.) We were given this film with the recommendation that it's a "thinking man's film with guts." Well, Tell Me Something does have guts and gore and body parts, and you do really have to pay attention to follow what's going on, but we think that anyone who truly thinks that this is a thinking man's film doesn't think enough, for though one must think a lot to follow all the threads and tie them together, the knot that the threads tie is looser than all appendages of those killed in this film – and seeing that they were killed and cut apart, their appendages are very loose indeed.

But for that, this film does have great atmosphere and nicely conveys a depressing and unfriendly, rain-drenched Seoul that is every bit as alienated, remorseless and soulless as the best of film noir cities like, say, the wet and depressing city in Se7en (1995 / trailer), the much better movie that most obviously inspired this one. This atmosphere, and the buckets of blood and body parts, goes a long way in making the film an interesting movie – "enjoyable" would be the wrong word to use here, considering some of the plot points and events – that retains your interest all the way up to the oddly awaited (as in: predictable) final twist. Our advice, should you choose to see this passable but hardly essential film, is to simply enjoy the film for what it is: a nicely shot, convoluted Korean gore thriller with narrative pretensions and a lot of plot holes.

When dismembered bodies stuffed in black trash bags start showing up across the city, police detective Cho (Suk-kyu Han) is given the case. He and his team soon stumble upon the pretty Chae Su-Yeon (Eun-ha Shim), who is known to have dated all three of the victims. Can they find discover the killer, or will Cho be the next victim – what do you think?
The film does enjoy three truly great bloody scenes: the bag that bursts open in a crowded elevator is truly awe-inspiring and blackly hilarious, the bag on the motorway is well shot and highly effective, and the fork-lift murder is an eye-opener. True, the film is perhaps not all that much more gory than  the average Sci-Fi Channel Corman production or Asylum film, but Tell Me Something doesn't use CGI and opts, instead, for good old cow blood and prosthetics; as a result, the gore scenes are all the more realistic and memorable. But as mentioned before, the quality of the gore and atmosphere is not justified by the story, which tries hard to be cutting edge and densely complicated but ends up simply being confused and illogical. Likewise, occasional events that propel the story are so contrived that they are almost aggravating.

For example? Well, there is a scene mid-way through the film in which Cho goes to the workshop of one of the victims who, he finds out, had installed hidden cameras in Su-Yeon's apartment. When leaving, he is confronted by an unknown person in a car on the narrow street waiting to run him down. Does Cho retreat into the safety of the warehouse to call for backup? No, he charges out onto the street to conduct a duel with the car, his flesh against the steel of the car. And once the car has knocked him about a bit and rendered him an exhausted, injured lump on the ground, does the driver run him over and kill him? No, the driver drives away. And let's not forget the murders that get the whole story into rolling: dismembered bodies spread across town. At no time in the film is it ever explained why the murderer(s) choose to call so much attention to themselves – they have no reason to do so, and it brings them nothing but complications that easily could've been avoided had the bodies been disposed of quietly.

Oh, yeah: it is a method for the final frame up. Sorry, that doesn't cut the mustard: the first murderer shown – the film opens with him cutting the first victim apart – is also a later victim and not the murderer that falls and takes the blame, and it is doubtful that either of those two would help the third in setting up the frame when the set up includes their own death (they, by the way, are later revealed to be part of a group of five). But then, this is what we mean by the threads tie a damn loose knot: the threads may help you connect everything together, but they don't actually tie neatly or convincingly. Even if, in the end, one is willing to accept that all those involved with Su-Yeon are actually killers – and the final photo of them in front of the tank containing her beheaded father shows that they are – at least the last three have to be either retarded or willing to die for her, for they literally set themselves up to die. And nowhere in the film is it ever revealed – convincingly or unconvincingly – why her four friends would help Su-Yeon to kill her father, no matter how despicable he is. (How despicable is he? Well, look here to get an idea.) Their apparent total devotion to her is as inexplicable as Detective Cho's attraction to her, for despite being mildly pleasant to the eye she in no way exudes anything truly alluring or attractive as a person, and thus it is difficult to understand why everyone is so captivated by her (non-existent) spell.

But then, that this film doesn't place much store in logic or reality is already obvious in the first crime scene in which a seemingly non-related suicide is investigated. In this film scene of a crime scene, as at all crime scenes in the movie, the cops place absolutely no value on preserving an undisturbed crime scene – indeed, the last film we saw in which the cops placed so little value on not contaminating evidence was Sapphire, from 1959. Not only do they trample around en mass, they smoke as they study the scene, and – in the case of the assumed suicide – not only handle the body roughly without gloves but actually rip a button of the dead boy's cuff for no apparent reason. (There is a reason, as you learn later: the button that Cho rips off the dead boy for absolutely no logical reason – in any event, for no other apparent reason than that he liked the way it looks – proves to be the all-important key that finally reveals the true murderer to him. What a coincidence!) But, who knows, maybe in Korea they still put about as much stock in not disturbing the crime scene now as the western world did back in the fifties – after all, it is obvious that the men in the film are seriously shocked by the concept that an attractive, adult and unmarried woman might actually have had "relations" with three different men.

Whatever. We could go on picking at the flaws of the film and its narrative that hide behind the supposedly intricate plot, but why bother? Tell Me Something is confused and confusing, and all the thinking in the world won't make it hold water or intelligent. As we mentioned before, this film is best enjoyed for its dark, depressing visuals and mood and gory parts and not for its superficially "intelligent" plot or hole-saturated resolution. Look too closely at Tell Me Something, and you'll simply find out that the film is the cinematic equivalent of Gaegogi, not Bulgogi. And while everyone we know loves Bulgogi, we've never met anyone – even in Korea – who likes Gaegogi...
Posted by Abraham at 11:27:00 AM