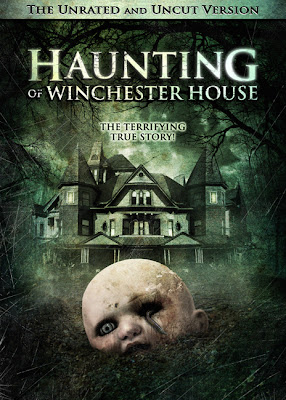 Ah, the Winchester House – one of the great American oddities, built by Sarah Winchester, the widow of gun magnate William Wirt Winchester, commonly known as the man who invented "the gun that tamed the West," the Winchester rifle.

Actually, contrary to popular lore neither Winchester nor his father Oliver invented the repeating rifle, but they were responsible for the improvements that led their weapon to such popularity and made them so rich. And somewhere along the way Sarah, William's widow and heiress to both his estate and 50% of the Winchester company, developed a few loose screws and became convinced that the spirits of all those killed by Winchester weapons would kill her if she ever completed the construction of her Queen Anne Style Victorian mansion in San Jose; as a result, the building was under continuous (as in 24-hours a day) construction for 38 years, with the building work ending mere minutes after she died on September 5, 1922. Since then, the meandering, illogically structured house has long become a popular tourist attraction and well-known "haunted" house. Oddly enough, though a "true story" ripe for the cinematic picking, it was nevertheless never tackled until this film in 2009, a "mockbuster" by the infamous production company, The Asylum.

And with that half the readers of this blog have probably already lost interest, for next to that of Uwe Boll, the only other familiar name around today that truly stands for consistent Z-level trash is The Asylum. And in all truth, this film, their direct-to-DVD attempt to ride – at least by similarity of name – on the coattails of 2009's Haunting in Connecticut (trailer), really doesn't break the mold or offer any surprises, despite possibly being one of their few almost passable productions.

Like most Asylum films, Haunting of Winchester House wears its low budget on its sleeve and is on the far side of even being truly good in any way, but surprisingly enough it is better than any other Asylum film we have seen to date – although the acting sucks just as much as normal, the CGI is just as mind-bogglingly cheap looking as ever, and story itself just as full of holes as is common for The Asylum. No, it is not a good film, but it is not total trash – like, for example, Transmorphers (2007) or Zombie Apocalypse (2011 / trailer) – and occasionally it is even effective as a ghost movie. Nevertheless, we here at A Wasted Life would be hard pressed to recommend it as worth watching because, well, if you get down to it, it isn't.

Populated with hobby actors and featuring a script you could use as a colander, the basic plot of Haunting of Winchester House involves a family – shades of Burnt Offerings (1976 / trailer), though in that film the family were renters, not caretakers – that moves into the Winchester mansion for a few months and, basically, immediately find themselves confronted by not only the ghosts that terrified Sarah Winchester, but Sarah (Kimberly Ables Jindra) herself who, in the best manner of Poltergeist (1982 / trailer), soon takes the daughter of the family and disappears into the wall of the closet. The stereotypical ghost hunter (Tomas Boykin) shows up long enough to explain the rules about ghosts and why they do the things they do and so forth and to pad the film a bit before departing in such a way that the viewer can only wonder how he ever got around to writing six books about ghosts. Will Susan (Lira "I suck as an actress" Kellerman) and Drake (Michael "I suck even worse than her" Holmes) get their daughter back? Will they leave the house alive? Will you – as did we – figure out the big twist ending long before the movie's final frame? Will you  even stay awake long enough to ponder these and similar questions?

"Director" Mark Atkins uses a very cheap cinematic horror trick in the movie a good dozen times, that of a mysterious figure suddenly moving across the screen in the fore or background. Those quick scenes, along with a little icky baby that crawls up the side of the bed for a half-second, are all the scares of the entire movie. Most of the rest of the time, he attempts to induce fear with loud music and people running in circles; for the most part, neither works. There is a helpful ghost of sorts, a deaf guy, who appears suddenly at one point: a well made shot – it's just a shame that the guy playing the ghost always pops his eyes like a bad joke and thus looks much more mentally handicapped than scary. The stupidity of his visage is matched by many another idiotic aspect of the film, two other that immediately come to mind being  the ditz who, at the start of the film, makes a protective circle to keep herself safe from the ghosts and then promptly steps out of it to die, and the illogical concept that two ghosts can't find each other within the same house (mama ghost Sarah can't find girlie ghost despite the fact that both can walk freely throughout the house, the girl even during the day).

Hell, the more we even write about this flick, the more we realize how bad it is. There might actually be a good film in Haunting of Winchester House somewhere, but it isn't in the film as it was made. Still, though a 98% failure for a low budget horror film, it is, for an Asylum film, a literal masterpiece of ghostly horror. Thus, it is probably great for kids who find flicks like Fear of the Dark (2003) scary, but everyone else might feel cheated or be pissed at having wasted their time.
Oh, yeah: we saw it in 3-D. Like, whippy-doo-da. No reason for 3-D here – it does nothing for the film, which probably wasn't even originally made in 3-D.
Posted by Abraham at 2:41:00 PM

More like a wasted film. The only thing scary about it, is the fact they made it.