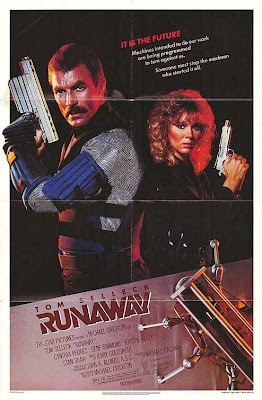 (Trailer.) Ever a good man with words while alive, novelist/scriptwriter/filmmaker and former all around nice guy Michael Crichton's first line in his autobiography states: "It's not very easy to cut through a head with a hacksaw." True, perhaps, but it is probably easier to do than to stay awake for this whole film. Eleven years after exploring the subject of robots gone wrong in the entertaining movie Westworld (1973), which he also wrote and directed, the man returned to the subject again to write and direct this crappy movie, which was probably already badly dated at the time of its release.

In Westworld the robots were actually androids, which might explain why they still seem effective more than 30 years after the movie's original release. In Runaway, the robots look more like little erecto-set constructions with wires and flashing lights and, unlike the droids of Westworld, they hardly elicit more than a sigh or giggle when they go out of control. Even the nasty ones, the little spiders with malevolent needles that explode look less scary than they do like some teenager's 30-year-old science project. Assuming that the film supposedly takes place in some future when robots have taken over many service sectors as well as the traditional roles of housewives and maids, everyone looks spectacularly 80s. And not only do the female cops even still wear skirts, but women in general are still more or less the weaker sex or a boy toy. If that wasn't bad enough, Runaway also suffers some miserable casting. As the cop Ramsay, Tom Selleck runs through most of the movie looking like some reject from the Village People who suffers an incredibly bad taste in glasses. Not only that, but he also looks amazingly older than he did 15 years later when he romanced Kevin Kline in In & Out (1997). His female partner Thompson is played by Cynthia Rhodes, who had boogied her butt in those cinema masterpieces Flashdance (1983) and Staying Alive (1983) and later earned worldwide, everlasting fame as Patrick Swayze's dancing love interest in Dirty Dancing (1987). In Runaway, she projects all the charisma and talent that would be expected of a person whose renown and career has been so everlastingly long. Charles Luther, the bad guy of the movie, is overplayed by Gene Simmons, who obviously hadn't learned much about acting six years previously in his first foray in the field, the laughably entertaining television turd KISS Meets the Phantom of the Park (1978).

The only halfway descent turn is done by Kirstie Alley, who eventually gets a knife in her neck and goes swimming. Still relatively young, three years away from her regular role on Cheers and many years away from all that body bloating personal stress success brings, she still looked good in her dress even if she did sometimes look like she didn't know what the fuck was happening.
Next to the script and direction and acting, the worst aspect of the film is possibly its soundtrack, supplied by Hollywood's most busy composer Jerry Goldsmith. A man capable of composing tunes as catchy as the theme to Our Man Flint (1966) and as soothing as The Russia House (1990), he seems to have had hearing problems while working on this film score. Arguably, one could describe the soundtrack as a noble but failed attempt at using electronics to suggest technology and the future. Unarguable, however, is the fact that it sucks.

And what exactly happens in the movie? Well, nothing exciting. Thompson and Ramsay find out that Charles Luther has a bunch of chips that converts nice little robots into killers and spend the rest of the film hunting him down. Luther has a nasty gun that shoots exploding bullets that are programmed to follow the individual body heat of each given target, and when he doesn't use that he uses the little exploding spider-like robots. There is some other stuff about the plans to the chips that Ramsay ends up getting a hold of which results in Luther kidnapping his son and then there is a boring climactic scene at a building site before Ramsay kisses his partner and goes home with her to fuck her brains out.... In every way, Runaway is as exciting as it sounds. Take my advice, if you ever see it playing somewhere, well, run away. (The film is indeed worthy of this joke.)
Posted by Abraham at 6:41:00 PM