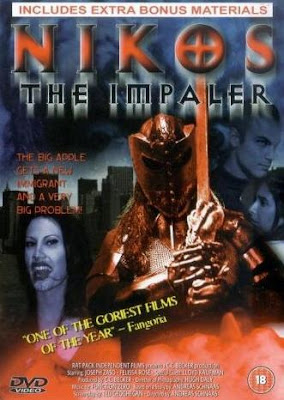 (Trailer) Last year, when I first saw this DVD floating around eBay while wasting time clicking through the horror DVDs, the name struck a bell in my memory. Wait! Didn’t I have something to do with some film called Nikos the Impaler years ago? A quick look at my translations CV—see above right, under "How I Put the Bacon on the Table"—confirmed my flicker of recognition: 2003, for a company in Hamburg, I did something, though I'll be damned if I remember exactly what. (It could have been the script, could have been subtitles, could have been a synopsis—who knows: too many joints in-between—and too many better paying jobs as well.) But I did remember that I liked the story more than the other horror flick I worked on some three years earlier, Swimming Pool (2001/Trailer).

In any event, that and a glimmering recollection of a high bodycount of obnoxious characters at an art exhibition made me decide to blow the dough and add Nikos the Impaler to my huge pile of DVDs-to-be-seen (presently at around 200+). There it sat for more than a year, until recently, one Monday at my regular Bad-DVD-Good-Beer-&-Nachos-Night with the guys, it was decided that, going by the trailer, Nikos the Impaler was the trashiest—and therefore the best—option for the evening. And boy, did we ever hit the nail on the head! 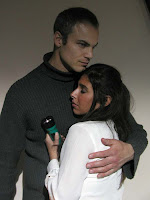 Nikos the Impaler is without a doubt one of the most consciously trashy and socially un-redeeming movies that a group of titty-and-blood-loving guys could ever hope to have the pleasure of watching. As a quick search of the Web will reveal, the director of Nikos the Impaler, Andreas Schnaas, is one of the directors agitating within the currently flourishing low-budget, direct-to-DVD horror scene in Germany (a non-unified scene that includes, loosely, Olaf Ittenbach, Jörg Buttgereit, Tim Rose and (gag) Uwe Boll—the latter being the only one to have gone above ground and international to date, the second to last (Buttgereit) being perhaps the most uncompromising. Raised on the tasteless, multi-violent sleaze flicks that once filled the train station cinemas of Germany, Andreas Schnaas's films—going by Nikos the Impaler—offer the exact same as those films of yesteryear but with less technical finesse and threefold the gore and sleaze. If Nikos the Impaler is typical of his work, then it is probably arguable whether or not any of his films are really any good in the traditional sense, but what is not arguable is that when it comes to hilariously bad acting, inane stories, multi-violence, excessive gore, and gratuitous female nudity—in other words, everything a true trash lover loves—Nikos the Impaler breaks the sleaze-o-meter. Indeed, when compared to the average Nu Image productions—see my reviews of Larva (2005), Alien Lockdown (2004) and Mosquito Man (2005)—Nikos the Impaler makes those industry low budget films look as if they were financed by Howard Hughes, written by Shakespeare, and filmed by Murnau. But no film that has anything to do with those three names is in any way half as satisfyingly sordid as this piece of cinematic flotsam.

Hell, Schnaas even tosses in one the great but long-lost staples of the great sleaze films of the past: a long, totally gratuitous shower scene of a naked babe (Darian Cane) that is really out to thoroughly clean every nook and cranny of her body. And then he does the scene one up by having her sliced and diced and even her breast pulled off by the sword-wielding Nikos, who just happened to wander into her shower. Great stuff, indeed!

In all truth, the film does start off pretty lamely, with an extended scene in ancient “Romania” that looks like a badly acted sword & sorcery skit staged by talentless refugees from a fifth-rate drama school, but as soon as the director shows that he obviously has good relations to a variety of slaughter houses by having Nikos pull out his entails (and the first big splurge of gore slides onto the floor), any experienced purveyor of trash can see that the film won't be a disappointment. (Neither the acting nor the production values ever achieve any true professional level throughout the film, but the dilettantism of the events adds additional charm to the blood and guts.) The film then jumps forward to modern day New York to a college class for a brief intro of some of the future fodder in which the film’s hero, the teacher Frank Heller (unsung cult actor Joseph Zado,

who’s since turned doing a sequel), advises his students to go to an exhibition on Romanian art. At the gallery, where among other pieces of traditional Romanian art hanging on the cardboard walls is a reproduction of a Jackson Pollack painting, a robbery goes wrong in the back room and the blood of the dying thief, upon contact with Nikos’s helmet, magically resurrects the bloodthirsty, sword-wielding killer. From here onwards faces get ripped off, people get sliced in two and/or impaled, heads roll, arms get pulled off and intestines get pulled out as Nikos first decimated the various dweebs at the gallery and then proceeds to wander around New York, slicing his way through, among other places, a gym, a grindhouse theater, a lesbian bar and a video store.

The last two locations offer the most satisfaction. The lesbians are seedy stereotypes just waiting to be offed by our manly villain, whilst the visit to the video store permits a variety of needless but fun “special appearances” by inside names (Lloyd Kaufman, Debbie Rochon and Bela B.) and an invigorating dash of Dadaist comedy by enabling a later guest appearance by both Adolf Hitler (Steve Montague) and Eva Braun (Tina Krause). Heller and his main squeeze Sandra Kane (Felissa Rose, the “transi” killer in the 1983 slasher Sleepaway Camp (Trailer) follow Nikos around town in hope of stopping him, but always seem to come a few seconds to late or early; still, unlike everyone else in the flick they live to save New York from Jason—I mean, Nikos.

In a nutshell, Nikos the Impaler is a badly acted, hilariously sleazy and fun piece of trash in which most of the budget seems to be spent on entrails and gore. Far from a good film in any traditionally justifiable sense of the description, many people (like me) will nonetheless find it wonderfully entertaining and that it goes well with both beer and marijuana.