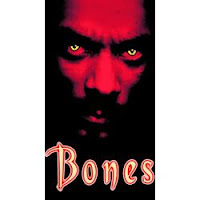 (Trailer) After gaining an experienced eye as a cinematographer and before moving into the realm of TV direction, director Ernest R. Dickerson had a brief run of well-made genre films in the 1990s that, while never overly original, tended to be good rides with a definite Afro-American slant but cross-racial appeal: Juice (1992) was one of the better ghetto flicks to come out in the 90s, Surviving the Game (1994)—starring Ice-T, Rutger Hauer and a dozen slumming character actors—is one of the better versions of The Most Dangerous Game (1932), and Tales from the Crypt: Demon Knight (1995) is simply fun, unadulterated trash. Which is pretty much what Bones is: a Canadian-filmed inner-city horror film that is well made and well shot, but that pretty much requires the viewer to check their brains in at the door. Though visually interesting and entertaining on a number of levels, the film is far more cheesy than it is scary; and if there is indeed any social commentary to be found in Bones—more than one reviewer has mentioned something about how the sins of our fathers come back to haunt us—the (to be expected) "shock" ending pretty much negates the commentary, for everyone ends up paying no matter who the father is.

Bones opens with a nicely blood-drenched scene circa 2001 that manages to introduce a couple of secondary characters while likewise showing why rich white students should not buy their drugs in the ghetto. Then the flick jumps back to the pure and funky Blaxpliotation 70s. Snoop Dogg plays the titular man in full Candy Tangerine Man (1975) regalia, the locally loved and respected good-guy godfather of his poor but happy 'Burg. Whether he is a pimp, pusher or whatever is never really explained, but a man of morals he says no the introduction of crack to his 'Hood and is promptly double-crossed and killed by his business partner (Clifton Powell), a crooked cop (Michael T. Weiss) and the crack dealer (Ricky Harris). Buried in the basement of his brownstone, the flick jumps back to the modern urban decay of today, the by-product of the crack he didn't want to have dealt. His run-down brownstone is now in the hands of a bunch of interracial twens—three of which happen to be the offspring of Bones’ traitorous ex-partner—out to open a club. Throw in ghostly shadows, a blood-thirsty shape-changing demonic dog, an always hot Pam Grier as Bones ex-squeeze Pearl (still living across the road), Bianca Lawson as her equally hot daughter Cynthia (much sexier here than in Dead & Breakfast (2004), where she plays a bitch) and some supernatural mumbo-jumbo about alternative universes, and before you know it Bones is up from the dead wreaking revenge—leaving a trail of blood and bodies that is played less for horror than for laughs. 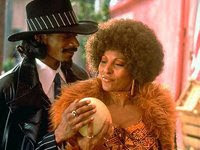 Actually, considering the supernatural power that Bones inexplicitly possesses as a bag of bones, it makes no sense that he waits so long to get revenge; his shape-changing doggy could have done it years ago. And, for that matter, even if he wanted to do it personally, it seems odd that the blood of one white stoner DJ is so much more rejuvenating than that of two white rich college cokeheads. Likewise, once he goes on his spree, it also makes no sense that he is suddenly so without scruples that he drags both is ex-squeeze and their (surprise!) daughter Cynthia into perdition... But maybe death does that to you.

But then, it is not the logic of this film that makes Bones fun. It’s the great cinematography (including visual homages to films ranging from Nosferato (1922) to Susperia (1977) to The Beyond (1981), amongst others), the film’s retro-Blaxploitation feel and the humor that keep this film from being, well, a boner. As a genre film, Bones is a low-budget stew of great and lesser-great ingredients that don’t really work all that well together but is still waaaaayyyy better than the average TV dinner. Keep your expectations low and you might just like it. But, damn: Why do so many of the trash genre films of today show such little skin? Whatever happened to good ol' T & A?
Posted by Abraham at 2:10:00 PM