(Trailer) Finland-born director Renny Harlin delivers another cool film. Not that all his films are cool – check out The Adventures of Ford Fairlane (1990) or Exorcist: The Beginning (2004) to see just how low he can go – but when he kicks ass, he kicks ass. In the case of Mindhunters (2004), he’s in top form and has dished out another cool genre flick that compares to his best genre work — namely, Prison (1988), A Nightmare on Elm Street 4: The Dream Master (1988), The Long Kiss Goodnight (1996) and Deep Blue Sea (1999).
Sold as some sort of FBI mystery thriller, Mindhunter is actually little more than a glossy, well-made body count that takes its basic conceit from the old Agatha Christie book Ten Little Niggers

(or, as it was re-titled as times changed, Ten Little Indians), which was filmed in 1945 by René Clair as And Then There Were None. In both Clair's classic and Harlin's re-working of the basic idea, a bunch of people are stuck alone on an island and are killed off one-by-one, the murderer obviously being one of their own – but who? But whereas the characters in the Christie film and book are strangers to one and another, in Mindhunters they are all classmates and friends: seven would-be FBI profilers sent on a training mission on an isolated island by their instructor Jake Harris (Val Kilmer). The sudden eighth member of the party (LL Cool J as Gabe Jensen) is of course the first suspect, but he too proves not to be a viable suspect. So who can the killer be?

Whoever it is isn’t wasting any time, however, and as one neatly lain and inanely ingenious trap after the other falls shut, the number of profilers dwindles. The traps are all ingenious — particularly the first one, the victim of which offers much the same shock value as the equally unexpected death mid-way through Deep Blue Sea — and the deaths are both nasty and gory, but more than just that, Mindhunters is visually well-directed and populated by well-acted and believable characters. (Indeed, that the characterization is so strong in the film is an integral aspect of the plot: the various traps are laid to correspond with the personality traits of the given victim.) 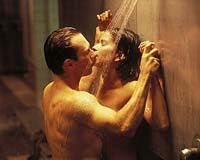 OK, a couple of the traps are so ingenious as to actually become ridiculous, but each and every one of them – even the one that you see coming – do manage to carry a good punch. Once revealed the driving motivation of the killer likewise does sort of seem a bit left-field, but if you figure the murder has the patience to set such traps, then they also probably have the patience to wait some 15 years before taking their revenge on their selected victims.

In a nutshell, Mindhunters is a well-directed, well-acted and fast-paced body count flick with decent gore and great effects — one damn fine piece of genre filmmaking, perfect for those who want something a little bit more interesting than just some superhuman madman in a white mask ala Michael Meyers or a supernatural jokester like Freddy.
Posted by Abraham at 11:04:00 AM