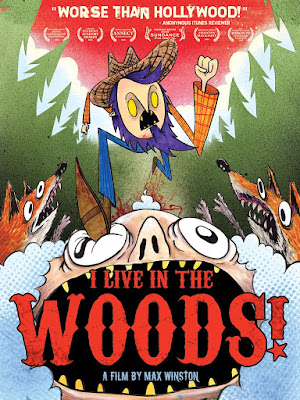 God is Dead! Long live the New God!
Were this short not already nine years old, we would be tempted to say this is some obscure, symbolic reflection of the current state of the American presidential office. But  nope. It's just a quick and violent, mostly stop-motion short full of surreal violence. Sort of like the current state of the American presidential office.
Over at Daily Film Dose, they hit the nail on the head with their description: "[Max] Winston's stop motion/live action quickie about a wildly violent hillbilly punk is told with the energetic momentum of a Road Runner cartoon, and a fresh Henry Selick meets Terry Gilliam meets Sam Raimi style. Unfortunately there doesn’t seem to be any throughline whatsoever other than the random bombardment of manic energy, pace and bloodsplattering gore. [...] Proceed with caution."
We see a throughline. It's a symbolic reflection of American politics.
As for caution: Fuck that — throw caution to the wind. (But always use condoms.)
I Live in the Woods! from Max Winston on Vimeo.
Posted by Abraham at 12:52:00 PM