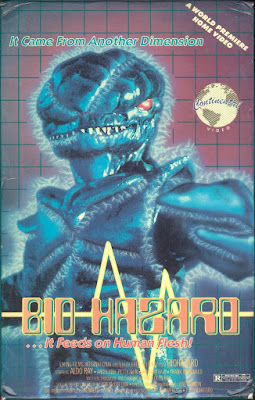 The name Fred Olan Ray is familiar if not legendary to anyone mildly interested in the B-films of the 80s and 90s. Had he been around 50 years earlier, without doubt he would've been a staple director of Poverty Row along the lines of William Beaudine (15 Jan 1892 – 18 Mar 1970) or the oddly less-reviled (and familiar) Sam Newfield (6 Dec 1899 – 10 Nov 1964), for Ray makes his movies quick and cheap and, one could assume, were it not for Biohazard's post credit sequence, with but one shot. 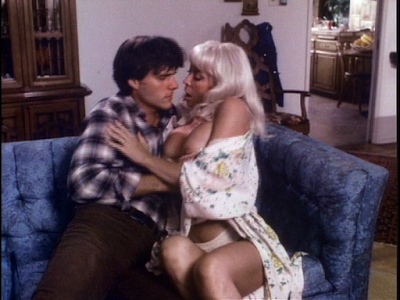 And speaking of the low budget programmers of Poverty Row, when watching this movie here, we couldn't help but think of the Bela Lugosi flick The Corpse Vanishes (1942 / trailer), directed by another forgotten B-flick director, William Fox (9 March 1895 – 30 June 1958), if only for the fact that we recently screened that now-ancient second-feature cheapie. But as different as Fox's film is from that of Ray, there are some similarities, the biggest being that both are basically nonsensical sci-fi horror films. In The Corpse Vanishes, a "mad scientist" (Bela Lugosi) uses science and the "fluids" of virginal brides to keep his wife alive — sounds like science to us — and, in Biohazard, a government scientist uses a psychic and scientific equipment to pull objects to Earth from other dimensions or maybe space. Plots ridiculousa extraordinarous, one and all. 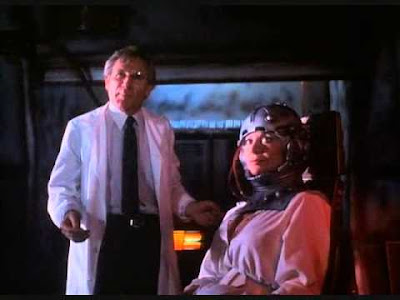 Needless to say, like the plots, the acting of both films is equally noteworthy as terrible. And then there is the matter of budget — neither film had one — and the use of over-the-hill stars: The Corpse Vanishes has Lugosi, Biohazard has Also Ray and Angelique Pettyjohn, not to mention an appearance by the totally forgotten and unrecognizable Carroll Borland (25 Feb 1914 – 3 Feb 1994), a visually iconic influence of yesteryear in her final film appearance. (She played Bela Lugosi's mute daughter in Mark of the Vampire [1935 / trailer] and thus influenced the look of everyone from Vampira [11 Dec 1922 – 10 Jan 2008] to Lily Munster [Yvonne De Carlo, 1 Sept 1922 – 8 Jan 2007] to Elvira. We would call that influential.) 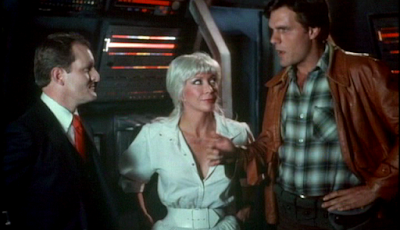 What sets the two movies apart, however, aside from 43 years and B&W vs. color and the B&B — breasts and blood — of the newer movie, is the time length. The Corpse Vanishes, as a second feature, runs a brisk 64 minutes, unpadded, and as slow and idiotic as it is, it zips by quickly enough to not overstay its welcome. That cannot be said of Biohazard, which in its essence is a color second-feature filmed at a time when there were no second features and thus, at 80-odd minutes in length, with padding, both drags and overstays its welcome — extremely, and that despite some naked rib cushions, light gore, and the fact that at least 10 minutes of the running time consists of both funny and unfunny bloopers intercut into the final credits. To say that Biohazard is a total snoozer is a bit of an understatement: the direction is much closer to being petrified than just static which, added to the dark cinematography, non-story, and thespian inability, makes it a bit hard to remain awake through the whole movie. 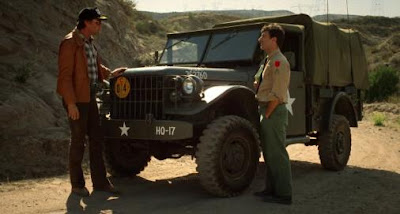 Which doesn't mean it isn't occasionally laughably entertaining, for films this bad generally do at least offer an unintentional laugh or two or three, and Biohazard is no exception in this regard. Nothing about the story really makes sense or logic, from the start to the end, and too much comes across as superfluous: the opening scene of two guys lost in the desert, obvious padding; the death of the guy "fixing" the wire in the desert, inconsequential to the tale and obvious filler; a secret underground laboratory doing top secret experiments but protected by one soldier (with a non-military standard haircut), obvious budget deficiency; interlude with neighbors and bathtub, obvious attempt to up the titty-quota… the list of occasionally entertaining flaws goes on and on and on, but the timespan between them also seems to go on and on and on, which definitely subtracts from the light laughs. 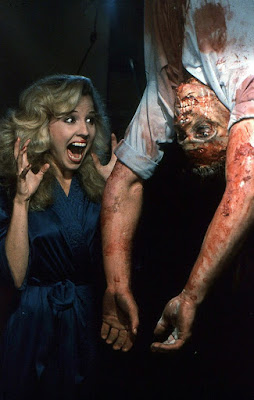 In Maitland McDonagh's book Filmmaking on the Fringe, Fred Olan Ray actually and inexplicably seems somewhat proud of what, in the end, comes across a bit like a student film. He reveals that, unemployed after shooting Scalps (1983 / trailer), he "put together" Biohazard while working at a lab doing the edge-coding of dailies, and mentions how he found Angelique "stripping at the Body Shop" down on Sunset — at a time when stripping was not yet seen as a reflection of New Feminism. And though it might not look it, the lab scenes were shot using the leftover sets of the spaceship from Roger Corman's Android (1982 / trailer),* which we remember perhaps incorrectly as a sweet movie. And while Ray states that Biohazard "was the first time we had done something that came out looking like a real movie," wethinks he doth overestimate too much.
* Sets, in turn, originally cobbled together from Corman's sci-fi sleaze classics Forbidden World (1982 / trailer) and Galaxy of Terror (1982 / trailer). 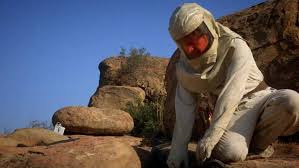 It is perhaps worth noting, at a trivia level, that Ray's then 5-year-old son Christopher donned the plastic suit to play the pint-sized killer alien. As for the rest of the actors, Aldo Ray is unrecognizable and probably breathed a sizable sigh of relief when he finally left the set. Mentioning his work with F.O.R. in an interview over at LeBeau's Blog, Aldo once said, "He'd give me $1000 in cash, pay my expenses, and I'd do a day's work. Somebody showed me one of his cassettes — 'starring Aldo Ray' — but it was just a one-day job.... I needed money at the time, and Fred knew I needed a buck, so I did it. He exploited me, yeah, but I was ripe for it." 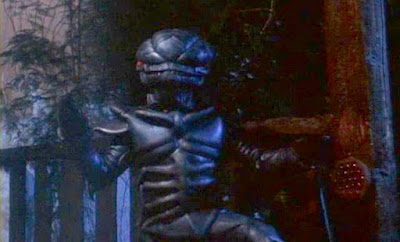 And so was Pettyjohn, obviously enough: although she did already have a minor list of cult-worthy films to her resume at the time of Biohazard — including Hell's Belles (1969 / trailer), The G.I. Executioner (1971 / trailer), The Curious Female (1970 / trailer), Mad Doctor of Blood Island (1968 / trailer), and Jim Wynorski's Lost Empire (1984 / trailer) — by the time of Biohazard, she had also occasionally paid her rent by sucking sausage and playing salami sandwich in titles such as Titillation (1982 / NSFW), Stalag 69 (1982 / NSFW), and Body Talk (1984). Oddly enough, however, as the psychic Lisa Martyn, one of the main roles, she never gets fully naked, though her nipples do say "Hi" over the top of her bra during and after a man-mauling-mammeries scene; at the supposed age of 42, she still looks oddly MILFy despite her typically horrendous wig. Pettyjohn proves to the best actor of the movie, which really isn't saying all that much, but her entire presence is seriously damaged by her horrendous wig. 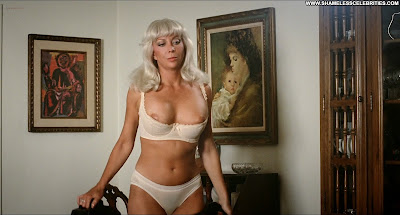 Still, to give the best feature of the movie credit, Biohazard does have a wonderful WTF ending, times two. It's a shame that everything else leading up to it is poorly made and dull. Pacing was obviously a concept the director did not see necessary to incorporate in his movie, but then, as the bloopers reveal during the final credits, everyone involved seems to have known that they were in a pile of shit, so maybe he didn't care. 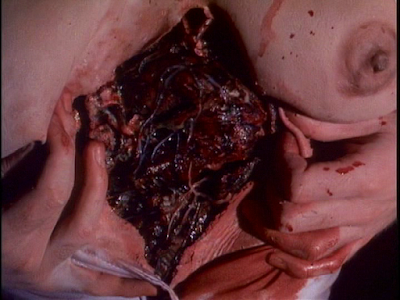 Biohazard was followed ten years later by the non-sequel Biohazard: The Alien Force (1995 / trailer), known to be of equal non-quality. We won't be watching that one. 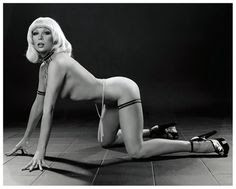