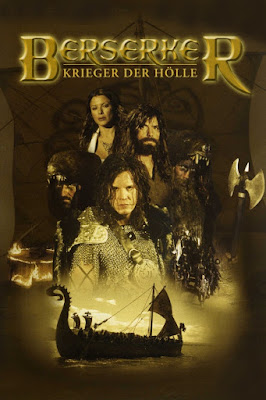 Over two decades ago, a concrete welder named Paul Matthews decided to leave the building trade and together with his siblings Elizabeth, Veronica, Janet, and Peter, form a B-movie company called Peakviewing Transatlantic. Obscure as the firm might be, it has released well over 20 feature-length movies since 1992, if usually direct-to-video. 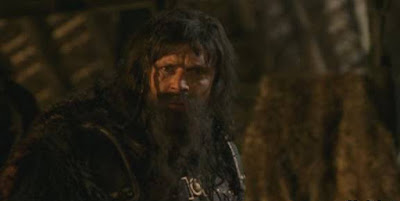 We had the displeasure if seeing one of Paul Matthews's earliest genre outings, Deadly Instincts aka Breeders (1997), and, truth be told, had we realized that the man who wrote and directed Berserker (2004) was the same man who "wrote" and directed Breeders, we might have skipped this movie. But no, we were seduced by the cheesy Berserker trailer, which seemed to feature time-hopping Vikings and vampires and a cast including three of our favorite B-film regulars, Kari Wuhrer (of Thinner [1996] and Anaconda [1997]), Craig Sheffer (of Flying Virus [2001]), and eternal ham Patrick Bergin (of Highway to Hell [1992]), the last of whom with some gnarly, hilariously fake facial hair. We expected a violently fun, genre mishmash with gore and tits, and what we got was basically a narrative mess that made no sense and often induced sleep. 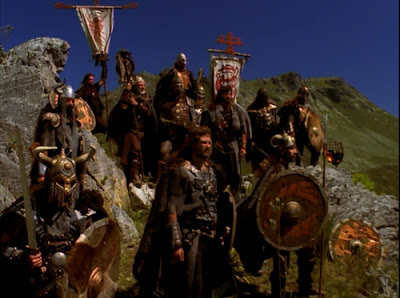 Some years ago, to the release of Paul Matthews' fantasy Merlin: The Return (2000), Michael Thomson of the BBC wrote in regard to that movie, "It's almost as if director Paul Matthews had accepted a bet to make the worst possible film." We would posit that either Matthews has taken that challenge often, or simply really doesn't give a rat's ass. Cinematically, his eye isn't the worst, even if he doesn't exactly know how to make a scene exciting, but when it comes to the narrative it really seems that either he just doesn't give a flying fuck about his stories and continuity, that he's a relatively incompetent scriptwriter, or both. In Berserker, as in Breeders, the narrative thread is often lost to the viewer, characterization is literally none or reduced to clothing, and actions often defy logic. Perhaps the most enjoyable interlude of the whole movie, for us, is when the good guy and gal, when escaping the bad guys, go to a half-empty disco and, to create a diversion, turn on the fire sprinklers. The whole bit was preceded by "Huh?" scenes and was followed by "Huh?" scenes, so the end effect overall was never excitement or suspense but mostly giggles or confusion. 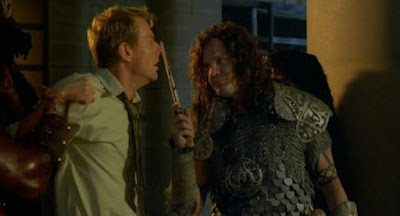 One might describe Berserker a colorful mixture of genres: action, Viking, fantasy, war, adventure and, dunno, romance (maybe). But to do so would be too kind, for more than anything else the film is simply a disjointed and confusing mess with a half-baked plot. The actors don't do too bad, perhaps, but even the film's most one-dimensional performance (Nick Boraine turn as Clifford) is much too good for the turkey it's in. 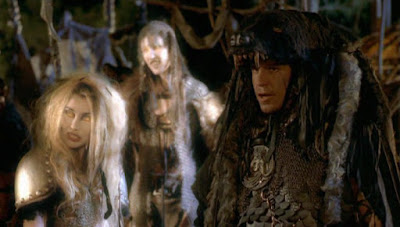 Not that Berserker starts off too badly: the opening scenes of ancient Vikings and valkyrie vampires are sort of fun in a cheesy, gory way and indicate that the movie might be good for a few laughs, especially since Patrick Bergin's Viking king Thorsson really looks like he hates every moment he's on screen and the good guy Barek (Paul Johnsson of Wishmaster II: Evil Never Dies [1999 / trailer]) is sort of hunky. And then there's also Wuhrer as Brunhilda. (Yummy — three-way, anyone?) But the little that the beginning of the movie promises is quickly proven to be a lie. (Sounds like an ex-girlfriend of ours.) 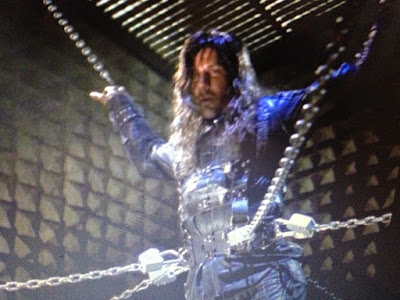 Barek, by the way, is the Viking son of Thorsson and, in turn, the brother of Boar (Craig Sheffer). The latter, after being bitten by the vampire valkyrie Brunhilda, runs off to join the Berserkers when Barek steals Brunhilda, whom Boar sees as his gal. Daddy Thorsson, however, needs the help of the Berserkers to ensure his thrown, but after the Berserkers keep their end of the deal struck, he proves untrustworthy. This angers the god Odin, and he revenges himself by making the movie fall completely and confusingly apart. Were it not for the plot description of the movie we found at the Peakviewing Transatlantic website, we would've been hard placed to explain the how and why of the movie's entire second half, which takes place in contemporary times. 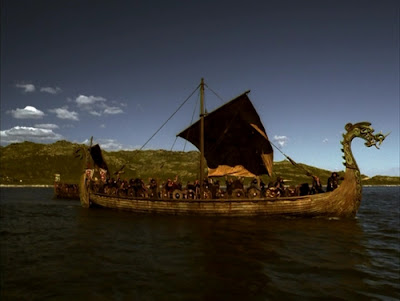 In the end, Berserker is all about curses and lifting them, but for us what remains memorable is Kari Wuhrer's turn as the miniskirt-wearing Doctor Anya. (She could take our temperature any time, using any of our orifices she prefers.) Despite some gore and guts and boobs, Berserker is basically a dull and disjointed and disinteresting disaster that should have been a lot funnier than it is. The biggest laugh it brought the night we saw it was when two of the five guys we saw the flick with simultaneously said "Did he shit that thing out?" at the movie's last scene, which basically features the parentless rebirth of Boar. 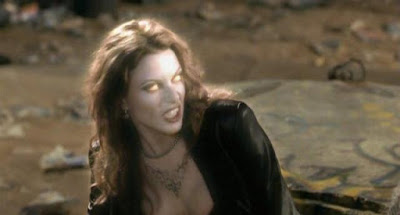 Berserker is a major fail in all ways; even as a "bad movie" it is more micro-dicky than even simply dicky. But the blame for the film's failure definitely doesn't lie on Wuhrer, Sheffer or Johnsson, all of whom give the movie more than it deserves. 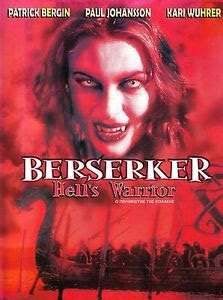