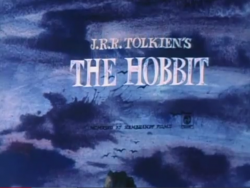 As of yet, all Short Films of the Month presented here at A Wasted Life were presented because we found them good. Here, however, is one presented because we think it sucks. And sucks enough to be interesting, sort of.
Did you, like us, see Peter Jackson's overly long and drawn out and oddly uninvolving trilogy and think, "Well, it can't get worse than this"? (OK, in all truth, we only saw the first two instalments; we decided not to bother with the third one.) Thing is, it was already worse twice before: in NBC's "execrable" kiddy animated kiddy musical version from 1977, and in this formerly presumed lost animated short film from 1966. 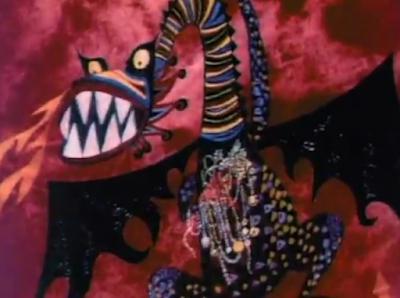 Wikipedia explains the facts: "The 1966 short animated film The Hobbit! was the first ever film production of The Hobbit. It was directed by Gene Deitch in Czechoslovakia. American film producer William L. Snyder [14 Feb 1918 – 3 June 1998] obtained the rights to the novel from the Tolkien estate very cheaply while it was still largely unknown, with the proviso that he produce a 'full-colour film' by 30 June 1966, and immediately set about producing a feature-length film, with screenplay by Deitch. The project fell through, but after the explosion in the novel's popularity, Snyder realized that his contract had not required the film to be of any length: he therefore instructed Deitch to create a 12-minute film based on his earlier work so that he could retain his rights. He later sold the rights for around $100,000 (not adjusted for inflation). The final project has very little to do with the source material." According to imdb, "The film was screened once in a Manhattan theater on June 30, 1966, the day the contract expired."
Not everyone hates the short. Eye for Film, which says "it's still a treat for completists and an enjoyable little film in its own right", has the following praise: "Brought to life by the beautiful illustrations of Czech painter Adolf Born, which will strike a chord with anyone who grew up watching kids' TV in Europe in the Seventies, this is a whimsical tale that will continue to charm younger viewers today. Excitement is provided by the swelling orchestral music of Václav Lidl, and Herb Lass' narration delivers on drama whilst maintaining a reassuring, bedtime story tone. Although there's no animation in the conventional sense, flashing lights lend impact to the scary sequences and there's so much detail to enjoy that the eye never wanders."
Decide for yourself.